Death Behind the Door (1933) by Victor MacClure

Thom MacWalter was a Scotsman who had studied architecture, painted and supposedly had an amateur interest in acting, but the onset of the First World War likely put his artistic ambitions on hold and worked for the British Intelligence – reportedly was badly wounded in the Gallipoli Campaign. After the war, MacWalter began to write fiction under the name of "Victor MacClure." 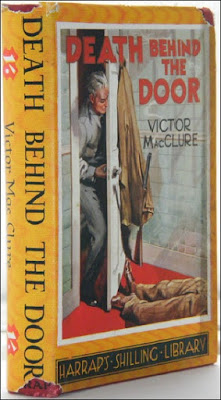 The most well-known, best remembered work under the MacClure name appears to be a science-fiction novel, The Ark of the Covenant (1924), but, more importantly, MacClure wrote a quartet of detective novels during the early 1930s. Detective-Inspector Archie Burford of the Criminal Investigation Department, New Scotland Yard, stands at the helm of this short-lived series.

A series that began with the intriguingly titled The Crying Pig Murder (1930), but the one that predictably caught my eye was Death Behind the Door (1933). The plot is briefly described in Robert Adey's Locked Room Murders (1991) as a murder in a cloakroom, which reminded me of the impossible situation from John Rhode's Invisible Weapons (1938), but never expected to find a detective story that could have actually been written by Rhode. A story with a plot firmly rooted in the traditions of the great triumvirate of the "humdrum" school, J.J. Connington, Freeman Wills Crofts and Rhode.

Detective-Inspector Archie Burford is on a well deserved holiday in the English countryside and has gotten permission from Colonel Selburn, Chief Constable of the county, to fish the "carefully preserved waters" of the region, but when he was pitting his wits against "a salmon of mettle" a uniformed man appeared on the river bank – a village policeman with an important message. Burford responds by asking his ghillie to maim or murder the policeman in various ways, because there's nothing "more important than a twenty-pound salmon." Only flash of genuine humor in this deliberate, methodical and leisurely-paced detective story.

The village policeman brought the news to Burford and Colonel Selburn that a well-known art critic, Graeme Wakeling, was killed at his home in a shooting incident.

Wakeling lives in a reconstructed farmhouse, The Ford, which is up river and had been found shot by his friend, Rupert Kyle, in the cloakroom with a sporting gun belonging to another friend and house-guest, Mrs. Edna Cayne. Burford accompanies Colonel Selburn to The Ford and, together with Superintendent Groves, begin to methodically examine every crumb of evidence and inch of the cloakroom. They learn who handled or cleaned the gun, and when, scrutinize fingerprints and question the small pool of potential suspects. A painstaking examination that allows them to eliminate the possibility of a tragic accident or an unfortunate suicide.

As an aside, I loath and detest it when a murder turns out to be a suicide, particularly in a locked room story, but I have to give props here to Superintendent Groves for his elegant, properly motivated (false) solution suggesting that Wakeling had committed suicide after all – Kyle had removed evidence from the scene to ensure "his friend 'll have a Christian burial." Normally, a victim disguises his suicide as a murder or suspicious looking accident to either make trouble for someone or the circumvent the suicide clause of their insurance policy. I have never seen a suicide turned into a murder, by a friend or relative, for this very human and understandable reason. Anyway... 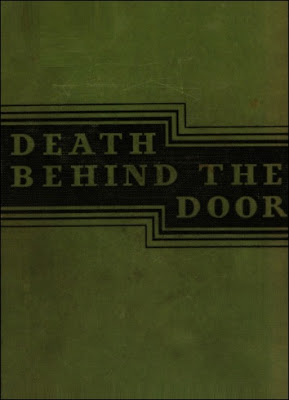 So the shooting incident in the cloakroom is murder and the challenge staring the police in the face is how the deed was done. However, this is not an impossible crime! Wakeling was alone in the cloakroom when the shot was fired, but not only was the cloakroom unlocked, "the door was standing open a little" when Kyle found the body and this makes the book a how-was-it-done very much like Christopher Bush's Dead Man Twice (1930). A status cemented when one of only two suspects, Cayne and Kyle, emerged as the murderer halfway through the story with the remainder spent on building a case against this person.

The case Burford and Colonel Selburn are building forces them to thoroughly reexamine the suspicious death of "the wickedly vicious, spiteful and indecent" ex-wife of the victim, Mrs. Wakeling, who died unexpectedly eighteen months previously of aspirin poisoning – taking a headache powder that inexplicably contained acetylsalicylic acid. Mrs. Wakeling had received a sample packet in the mail and how it ended up in a machine-packed dose of headache powder is another how-was-it-done rather than a pure impossible problem. Still, this was a interesting side-track to the investigation.

Up to this point, Death Behind the Door only had a pair of good murder methods and some clever, old-fashioned police work in the "humdrum" tradition, but the murderer's personality, attitudes and motivation makes the book stand out.

Firstly, the murderer turns out to stand on equal footing with the detective and the ending is best described as a stalemate between the two. You have to read for yourself how this transpires and is resolved. Secondly, the motivational drive of the murderer is something out of the ordinary. And there's something tacked to the motive at the end that was very not-done at the time.

So, all things considered, Death Behind the Door is a methodically plotted detective story with the focus on the mechanics of the crimes, instead of figuring out who-has-done-it, which will be most appreciated by fans of Crofts, Connington and Rhode.
Geplaatst door TomCat on 3/05/2019