J.A. Konrath is an American writer of more than twenty novels and over a hundred short stories, mostly crime and horror fiction, who has won the Derringer Award and Ellery Queen Reader's Choice Award, but my only exposure to his work has been "On the Rocks" – a short story anthologized by Mike Ashley in The Mammoth Book of Perfect Crimes and Impossible Mysteries (2006). A good little locked room story featuring the forty-something Chicago homicide detective, Lieutenant Jacqueline "Jack" Daniels. This was not the last time an impossible crime would be dropped into her lap. 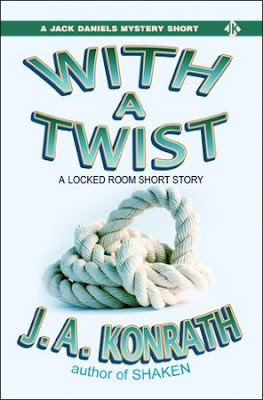 "With a Twist" originally appeared in the December, 2005, issue of Ellery Queen's Mystery Magazine and republished in 2011 as an ebook. This story is, in my opinion, a minor classic and I'll tell you why in a moment.

The story opens with Jack Daniels and Herb Benedict, of the Chicago Police Department, standing in the blood-splattered living room of the Edward Wyatt, a 67-year-old retiree, who lies splayed out on the beige carpeting "damp with bodily fluids" – his skull had been shattered and "his spinal column looks like a Dutch pretzel." Evidently, Wyatt had fallen from a great height, but the ceiling is no higher than eight foot and the place had been securely locked up. The front and back door were fitted with so-called privacy locks and dead-bolted from the inside. Same story with the windows, which were also locked from the inside.

You probably think the whole scene was staged by a devious killer, but all of the physical evidence, including the locked doors and windows, point towards an impossible suicide.

There are hundreds of carpet fibers embedded in the body and the wall-to-wall carpeting has a secondary splatter, indicating that the body bounced when it hit the floor, which is all consistent with a fall from a great height. A religiously-worded suicide note is found on the bookshelf. Wyatt could have only taken his own life that way, if he had taken off the roof, "jumped out of a plane" and "landed in his living room." So, either way you look at it, the case is an impossible one.

Where the story becomes truly great is when items in the house reveals the victim to have been "a man who loved mysteries, games, and puzzles." The book shelf was crammed with mystery novels, such as G.K. Chesterton and John Sladek, puzzle magazines, books on logical thinking and some old-fashioned (puzzle) games – like Clue and a 1980s Rubik's Cube. They also found cancer drugs. And this is where the game really begins.

Lt. Daniels quickly comes to the conclusion that this was a very ingeniously contrived and elaborately arranged suicide, staged by a puzzle fiend, who wanted to go out on his own terms and hid tell-tale clues, codes and messages all over the house – somewhat reminiscent to an escape room game. But here it gives you the solution to a seemingly impossible puzzle. 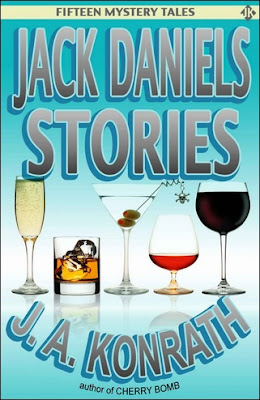 So what exactly makes "With a Twist" a minor classic of the modern locked room story? I hate and loath it when an impossible crime is explained away as a suicide-disguised-as-murder, because it's a bullshit cop-out and, worst of all, hacky. It barely requires any imagination or plotting skills. For example, you can have a stabbing inside a sealed, concrete bunker and explain it away by saying the victim committed suicide by walking backwards into the knife that was wedged in between something.

I never expected to read an impossible crime story, with a suicide, that not only worked, but was good. Konrath pulled it off here by making it clear early on Daniels was investigating a suicide. And she had to figure out how it was done. This approach made for an interesting take on the inverted mystery and helped making the more labored aspects of the plot more acceptable, because you know the victim was a dying man who loved puzzles and why he would go through all trouble of turning his suicide into one big riddle – which I completely respect. I liked it there were basically two impossibilities, an impossible fall and a locked house, of which the latter was better than the former. A simple, straightforward, but effective, locked room-trick that nicely played on an old idea.

So, all in all, "With a Twist" is a good and fun detective story with a victim who played the role of a benevolent Jigsaw Killer, from Saw (2004), which resulted in an unusual, but pleasant, locked room tale. I would like to read his third locked room story, "Mixer" (2015), which he apparently co-wrote with Nick Andreychuk, but it appears to have been scrubbed from the internet. It's not available anywhere. Hopefully, that one will get reprinted, because I would like another shot of Jack Daniels.
Geplaatst door TomCat on 3/31/2019