The Antlion Trench Murder Case was originally serialized in Weekly Shônen Magazine and collected in volumes 5-6 of Kindaichi Shounen no Jikenbo R (The File of Young Kindaichi Returns), which Ho-Ling Wong described as having one of "the most ridiculous designed building" in the entire series – a research facility in the middle of a desert-like field of quicksand. This case is not considered to be a high-note in the series, but wanted to know how this bizarre and ridiculous architectural marvel was put to use in service of the plot. It certainly was odd, I'll tell you that much. 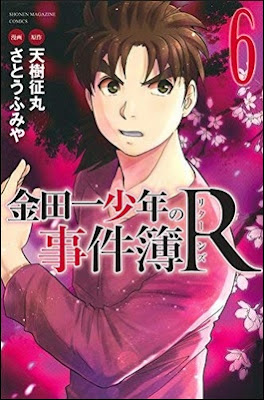 An old acquaintance and freelance journalist, Yosuke Itsuki, invited Hajime Kindaichi and Miyuki Nanase to participate in a three-day psychological experiment as a way to make a little bit of pocket money.

The experiment is conducted by Professor Maeda Junki, of Saitou University, who has a former military base at his disposal. A facility commonly known as Antlion Trench, situated on the outskirts of a small desert, where captured soldiers were imprisoned during the war and escaping is next to impossible, because the base is surrounded by dangerous patches of quicksand – which can only be navigated by following a roped pathway. Antlion Trench is a cluster of pod-like buildings linked together by long, snaking corridors and (locked) doors.

All of the participants are locked inside this facility for three days and have to wear differently colored kimonos, which represent their inner trauma or desire. A wristband with a body sensor-and radio device will record all of their vital signs, which are send to the professor's laptop. So they're under constant observation during those three days. And cell phones aren't allowed!

As to be expected, two of the participants are murdered and here the outlandish, maze-like layout of the structure begins to work against both Kindaichi and the reader. First of all, getting to the first victim proved to be an obstacle course, because they're constantly confronted by locked doors and dead-ends in a place where every room and corridor looks practically the same – making it very confusing to follow everyone's movement. Something that's not entirely unimportant to the solution.

However, this is not a locked room mystery in the traditional sense. The murders appear to be baffling and incredibly hard to have carried out, but they're not, strictly speaking, impossible crimes.

Unfortunately, the explanation to the murders reworked on of my favorite Kindaichi stories by pumping it full of steroids, because The Antlion Trench Murder Case is pumped-up version of that particular story. Just not as good or particularly well executed. Another thing I have began to notice is that The File of Young Kindaichi Return series uses "The Puppeteer of Hell," Yoichi Takato, as a convenient plot-device to justify the more fantastic aspects of the plot by simply pointing at him and saying, "it was all his idea." And if you lean on that too much, you run the danger of creating something completely incomprehensible. Something this story was (at times) dangerously close to becoming. Hell's Puppeteer is a great character and a perfect foil to Kindaichi, but this is not the best way to use him.

So the mechanics of the crimes were less than perfect and the movement of the various characters through the maze-like building was confusing at times, but it made for an oddly interesting detective story – especially when you add the psychological angle and wristbands to the overall picture. There were one or two good clues hidden in them that pointed to the murderer. One clue particular gives immediately identifies the murderer, if you're able to spot it. As usually, the age-old revenge motive is dragged out, which is used in nearly every volume of this series, but this back-story was an interesting one. And it's baffling that culprits of this crime saw their action as a prank gone wrong. It was as close to (unintended) murder (manslaughter?) as you can possibly get.

Just like my previous read in this series, The Antlion Trench Murder Case had an intriguing premise and bizarre backdrop, but everything else was par of the course for the series. And part of the plot reworked a previous and much better story. So this was not one of Kindaichi's all-time greatest cases, but neither was it his worst. Just a very middling title in the series.