Last year, I reread one of my favorite detective novels, The Danger Within (1952) by Michael Gilbert, alternatively published as Death in Captivity, which is best described as a semi-autobiographic wartime detective-cum-thriller novel about British soldiers in an Italian POW camp – who find a body in one of their secreted tunnels. A brilliant novel reminiscent of The Great Escape (1963), but the book preceded the movie by more than a decade. 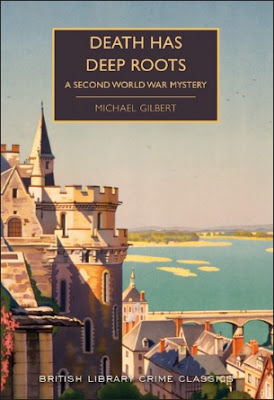 I ended my review with the promise to airlift more of Gilbert's novels from the snow-capped tops of Mt. To-Be-Read. However, this promise never materialized in 2017 and sounded incredibly hollow in 2018, but there was still time left. So, on the threshold of the new year, I decided to take Death Has Deep Roots (1951) down from my bookshelves. I really should have gotten to it sooner.

Death Has Deep Roots is a marvelous detective novel in the tradition of Carter Dickson's The Judas Window (1938) and Anthony Gilbert's The Clock in the Hatbox (1939).

Mademoiselle Victoria Lamartine was engaged in resistance work, in occupied France, where she came into contact with a British officer, Lieutenant Julian Wells, which resulted in a pregnancy, but she arrested by the Gestapo in 1943 and had to give birth in a prison – a boy who died of malnutrition two years later. Wells was never seen or heard of again. So, when the war ended, Lamartine came to England to work at a residential hotel and used her spare time "pestering the War Office" for news of Well and a Major Eric Thoseby.

Major Thoseby is a tough, crafty and diligent investigator for the Tracing Staff, an international team tasked with finding victims of the war, but in 1943 he helped run the French resistance in Lamartine's district and has agreed to meet her at the hotel. However, Major Thoseby is stabbed to death shortly after he arrived at the hotel and Inspector Partridge arrests Lamartine for the murder.

Inspector Partridge believes Major Thoseby was the father of Lamartine's dead child and his hypothesis is strengthened when a kitchen-knife was found in the room with her fingerprints on it, but there's also "an element of what you might call" a sealed box mystery – because "the only means of access to Major Thoseby's room" is a flight of stairs closely commanded by the reception desk. The desk itself was under observation from the lounge and a map of the situation is included. So "the closed box" was sealed, "not by locks, and bars, and bolts," but by human observation. However, the sealed box has "a number of cracks or loopholes in it" and the solution practically disqualifies it as a locked room mystery. This was hardly enough to spoil an otherwise excellent detective story.

Only real weakness of the plot is the weak, circumstantial case of the prosecution. You have to wonder why Lamartine's defense wanted to plead guilty, under provocation, with "a strong plea for leniency of the court," but wisely refused and engaged another lawyer.
Noel Anthony Pontarlier "Nap" Rumbold, the junior partner in his father's firm of Markby, Wragg and Rumbold, Solicitors, of Coleman Street, decided to take the case and assembles a team of professional and amateurs detectives. 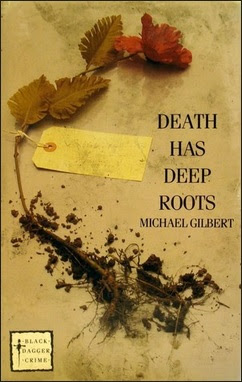 Mr. Hargest Macrea has argued law, in every kind of courtroom, for a quarter of a century and is hired to argue for the defense. Major Angus McCann is a publican and a friend of Nap, who helps with the legwork, but McCann and Nap got more than they bargained for when they followed a lead to a bad side of town. And these exciting, thriller-like scenes makes Death Has Deep Roots one of the more lively courtroom mysteries. There are even brief appearances from Chief Inspector Hazlerigg at the beginning and end of the story. This group of amateurs and professionals have two lines of attack: the people who were staying at the hotel and finding out what had happened to Lt. Wells in 1943.

On the England end, they have the hotelier, Honorifique Sainte, who came from the same Basse Loire province as Lamartine and had been aware of the story of her capture in occupied France. Ercolo Camino is the waiter, porter and general factotum of the hotel and was charge of the desk on the evening of the murder. The only two guests in the hotel at the time were Colonel Trevor Alwright, who was getting drunk in lounge and had a view of the receptionist desk, while Mrs. Roper turns out to have a double life – which plays out on "the fringe of the law." Across the channel, they have to piece together what happened to Lt. Wells after the Gestapo raided the farm where he was hiding and arrested Lamartine.

As, as usually with these channel-crossing mystery novels, there's a smuggling angle involved, e.g. Christopher St. John Sprigg's Death of an Airman (1935), Basil Thomson's The Milliner's Hat Mystery (1937) and John Bude's Death on the Riviera (1952).

The private investigation of McCann and Nap is interspersed with the cross-examination of police experts and witnesses in court, which slowly, but surely, unearth the deeply tangled roots of the case. These roots lead all the way from war-torn, occupied France to a quiet residential hotel in London. I think the plot fitted nicely together, notably the who and how of the crime, but the motive and the answer as to what happened to Lt. Wells could have been better clued. Or more strongly hinted at. Regardless, Death Has Deep Roots still stands as an excellent and strong example of the courtroom detective novel. And highly recommend it, if you like courtroom dramas and mysteries.