Ghosts of Christmas Past: "The House That Brought Bad Luck" (2018) by Anne van Doorn

"Het huis dat ongeluk bracht" ("The House That Brought Bad Luck") is a recently published short story by "Anne van Doorn," a pseudonym of Dutch crime writer M.P.O. Books, which takes place during those long, dark and snowy days of Christmas. An old-fashioned detective story about a haunted house and an elusive figure "who can travel through the air like Santa Claus."

Lucrezia Izelaar is the former wife of a Turkish criminal, Murad Uysal, who used to own a coffee shop, but "the sale of cannabis was his legal activity" and supplemented his income with rip-deals and robbing weed growers – leading to an inevitable spell in prison. Naturally, she divorced him and remarried the director of an export company, Menno Izelaar. Murad had threatened her that he would never allow her to leave him or take their children with him. 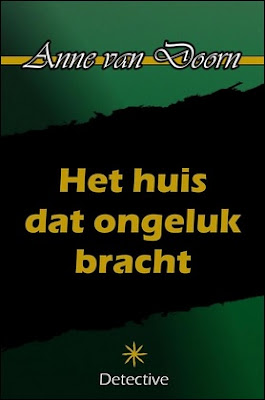 This was not a problem, as long as he was locked up, but, as his impending release date drew nearer, the trouble began. So they quietly moved to a villa in Oosterbeek, named De Alpenroos (The Alpine Rose), which has a yard enclosed by a high, thick and "impenetrable hedge." There's a main gate with "an intercom and a security camera directed at the entrance." The garden gate was kept securely locked at all times. A fairly save and secure home, but the place has a dark and tragic history.

De Alpenroos is merely a stone's throw away from the place where the Allied Forces had battled intensely with the Nazis during Operation Market Garden in 1944.

During this period, the Nazis had billeted four soldiers in the villa and three of them died fighting in the surrounding forests, but one of them returned, Günther, who was mortally wounded and collapsed at the front door – banging and screaming to be let in. Only problem is that the then owners of the villa had also been hiding Jews in the attic. So they couldn't let him inside and left him to die outside. Günther cursed them with the last breath in his lungs.

If you know your history, you'll know that Operation Market Garden was the proverbial bridge too far. So the then owners of the villa were summarily executed and "de onderduikers" (people in hiding) were transported to Germany.

Well, the ghost of Günther has stirred from eternal slumber to haunt and torment Lucrezia's family. However, she believes the person responsible for all of the devilry around her house is her ex-husband. Not the ghost of a German soldier from the Second World War. Unfortunately, the police has no interest or the time to tackle a ghost, real or fake, which is why she engaged two particuliere onderzoekers (private investigators), Robbie Corbijn and Lowina de Jong – who are presented with "an impossible case." Corbijn even becomes an eyewitness to one of the ghostly manifestation in the villa on Christmas Eve.

Late in the evening, someone or something began to loudly knock on the front door, as if a clenched fist was repeatedly hammering on the woodwork, but, when they pulled the curtains aside, nobody was standing there. And the knocking continued!

Late in the evening, someone began to loudly knock on the front door, as if a clenched fist was repeatedly hammering the woodwork, but, when they parted the curtains, nobody was standing there. The knocking continued! Corbijn sprinted to the door and there were, at most, two seconds between the last knock and the opening door, but nobody was there. So how did this elusive figure manage to get pass the electronically locked gate and the thick, thorny and impenetrable hedge?

A second, very similar impossibility happened the following night: repeated knocking on the door and this time they heard a disembodied voice screaming and cursing in German, but nobody was standing there when Menno opened the door. However, this time Corbijn had installed a camera-trap and the incident was captured on video. What the camera captured was "a luminescent shadow."


There's a third impossible situation when Lucrezia's youngest daughter becomes hysterical when she saw a bearded man ticking against her bedroom window, but the wall has no support to cling on to, such as a drainpipe, nor were there any "footprints or impressions of the legs of a ladder" found in the grass below. This is only the beginning. A bearded man visits the villa and leaves behind a dead body in a locked room, which is quickly and easily explained, but this late murder is a only minor side-puzzle in overall plot and murderer's revelation is a type of solution I generally dislike enormously – although the trick was convincingly and properly motivated. So there's that.

The main attraction of the story remains the inexplicable, ghostly activity around a tightly locked and secure house, all of them were clued or foreshadowed, but as pleasantly clever and old-fashioned as the plot was the presentation and structure of the story. There's a floor plan and the policeman in charge even comes up with a false solution. Every aspect of the story, plot, characters and clues stick and work together like the innards of a Swiss watch. I particularly liked how beautifully the method for the impossibilities dovetailed with the identity of the ghost and the motive.

This places "The House That Brought Bad Luck" on par with other more recent Christmas-themed locked room short stories such as Paul Halter's "La marchande de fleurs" ("The Flower Girl") and Szu-Yen Lin's "The Miracle on Christmas Eve" (collected in Realm of the Impossible, 2017). Not a bad company to be in.

"The House That Brought Bad Luck" is a short story with a snowfall of impossible crime material, clues and even an unaccountable murder, which all helped making this story my favorite entry in the series. As you all know, I don't like locked room mysteries. I love them like a deranged stalker with serious boundary issues. So the fact that this one was written by one of my compatriots made it all the more enjoyable

The previews of the upcoming releases promises even more locked room-like short stories! So you haven't seen the last of Corbijn and De Jong on this blog.
Geplaatst door TomCat on 12/22/2018