Back in 2015, I reviewed a full-blown science-fiction novel, James P. Hogan's Inherit the Stars (1977), which was brought to my attention by a 2013 blog-post by Ho-Ling Wong, who was surprised to discover a science-fiction title had procured a high-ranking spot on the Japanese Tozai Mystery Best 100 list – beating such classics as Agatha Christie's Death on the Nile (1937) and William L. DeAndrea's The HOG Murders (1979). And not without reason!

Inherit the Stars is pure science-fiction with the plot of a scientific detective story and has an ending as memorable as its fantastic premise. 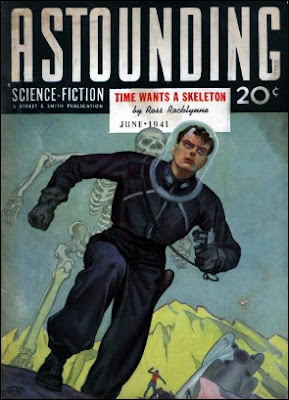 A mummified body of a normal sized, anatomically modern man in a spacesuit is found on the Moon in the far-flung year of 2027, but carbon dating says the body and equipment are over 50.000 years old! During this period in history, mankind was a primitive hunter-gatherer. So how did a body from the Upper Paleolithic in a highly advanced, nuclear powered space suit end up on the surface of the Moon in 2027?

Ho-Ling ended his own review with saying that the astonishing answer to this conundrum "makes quite the impression" and he wasn't wrong, which is why we have shamelessly appropriated it from the science-fiction genre and we're not giving it back – it's ours now! Well, I always wanted to read another science-fiction-style mystery novel with a similar kind of premise and I serendipitously found one. It even counts as a Christmas tale!

Ross Louis Rocklin was an American science-fiction writer, under the name of "Ross Rocklynne," who was a regular contributor to such science-fiction magazines as Astounding Stories, Galaxy Science Fiction and Planet Stories. Rocklynne's "Time Wants a Skeleton" is a novella originally published in the June, 1941, issue of Astounding Science Fiction and is a who-will-be-done-in-type of detective story reminiscent of Pat McGerr (e.g. Pick Your Victim, 1946).

The story begins with Lieutenant Tony Crow of the IPF chasing a couple of outlaws, Johnny Braker and Harry "Jawbone" Yates, across the asteroid belt when his ship crash landed on the base of a mountain on Asteroid 1007 – a shootout ensues and the outlaws are apprehended. During the shooting, Crow found a cave in the base of the mountain and inside was a human skeleton! The remains of a human being who had existed in "the dim, unutterably distant past" before the asteroid and "the human race had come into existence." An old ring or gold, inset with an emerald, gleams on "the long, tapering finger" of the skeleton. And one of his prisoners is wearing an identical ring with exactly the same, very distinctive flaw in the stone!

Crow, Braker and Jawbone are picked up by the ship of Professor Overland and his daughter, Laurette, who were in the asteroid belt to trace faults, strata and striations on one asteroid and link them up with others. They are investigating a theory claiming that "the asteroids used to be a planet." So, when Professor Overland hears of the skeleton, he turns around the ship to return to Asteroid 1007, but the revolutionary new H-H drive in the ship fling them millions of years back into the past. A time before the asteroid belt. A time when it was still a planet, but not for very long.

A crescent-looking planet is visible as a small moon in the sky, but this is an "invading planet" and grows steadily larger with each passing day. And as this moon-like planet grows in the sky, tidal winds increase savagely. So they have roughly nineteen days to patch up their ship and escape being obliterated when these doomed planets collide – except there are some problems. Such as two attempted murders. Another problem is that the entire crew is gripped by the conviction that one of them has to die, in order to provide the skeleton in the cave of the future asteroid, but who's going to be left behind? A conviction strengthened when it proves to be impossible to get rid of the ring. 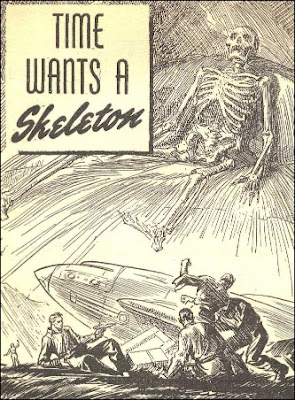 The problem of the skeleton on Asteroid 1007 is the detective hook of the story and the solution was a truly surprising, but the clues require an imaginative leap of logic to put two and two together. So not every mystery reader is going to be blown away by it or may even regard as a cheat. I simply wanted another relatively good or passable take on an impossibly ancient human remains found on a celestial body and "Time Wants a Skeleton" gave me exactly what I wanted. Only reason why I didn't tagged this review as a "locked room mystery" or "impossible crime" is because time travel was involved, but the identity of the skeleton is what makes it qualify as a genuine hybrid mystery. And a good one at that!

So the story, as a whole, is more science-fiction than mystery, but I thought the time-paradox was very well handled and made for one of the better science-fiction detective stories I have read to date.

Granted, my reading of classic science-fiction has been limited almost entirely to hybrid mysteries and one thing that has always bugged me is that many of them had problems with envisioning a far-flung future beyond the basics – like rocket ships, space suits, robots and laser guns. Not everyone had the world-building abilities of Isaac Asimov (e.g. The Caves of Steel, 1954). Manly Wade Wellman's Devil's Planet (1942) takes place on Mars a thousand years in the future, but is littered with 20th century references and clunky technology. Giving you the idea culture and technological has stagnated, before it collapsed, during those thousand years. David V. Reed's Murder in Space (1944) concerns a planetoid in the asteroid belt settled by miners with advanced spaceships, but courtroom photographers still used old-school flashbulbs.

This certainly was not the case with "Time Wants a Skeleton." You can really believe the story takes place in the far-flung future. Or, as is the case here, the dim, distant past.

You're probably wondering how a science-fiction story about a time-paradox, a haunting ring and a doomed planet can be considered a Christmas tale. Well, the story takes place between early December and Christmas. Christmas plays a part in the resolution of the time-tied skeleton in the cave on the asteroid that used to be a planet millions of years ago. You have to read the story yourself to find out how that plays out. The good news is that you can find the Astounding Science Fiction issue, which contains this novella, on the Internet Archive by clicking here. Enjoy!

Rocklynne's "Time Wants a Skeleton" was, as far as I can judge, a good time travel yarn with a detective hook and a solution for the skeleton on the asteroid that's very different from Hogan's Inherit the Stars. So mystery readers who were impressed by Hogan should definitely read Rocklynne's novella.