The Man on the Moon

"I think we're going to the moon, because it's in the nature of the human being to face challenges."
- Neil Armstrong (Commander of the Apollo 11 Mission)

I'm not sure if James P. Hogan's Inherit the Stars (1977) would've captured my attention, if it weren't for a very tantalizing review on Ho-Ling's blog. 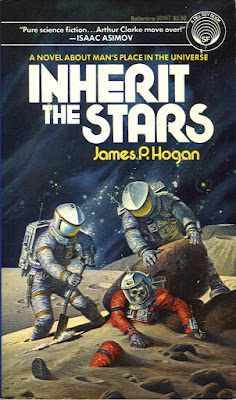 Inherit the Stars is categorized by some as a science-fiction mystery and procured a high-ranking spot on Japan's Tozai Mystery Best 100, which left behind many classics and fan-favorites – such as Agatha Christie's Death on the Nile (1937) and William L. DeAndrea's The HOG Murders (1979). That's something that'll get you noticed around this neck of the woods!

The events described in the book take place between the years 2027 and 2029, which is only a mere 12 years away from us, but, evidently, it's set in a world where history took a different path.

It's an alternative universe that saw "the ideological and racial tensions inherited from the twentieth century" being swept away as a result of a "tide of universal affluence and falling birth rates that came with the spread of high-technology living." A surplus of funds and resources, that became available after worldwide demilitarization, where shoveled in a rapidly expending United Nations Solar System Exploration – which has a floating laboratory above Venus, exploring Martian surface and has settled the Moon.

Than they make a discovery that could "keep the entire scientific world arguing for decades."

A normal-sized, anatomically modern remains of a human in a spacesuit is uncovered on the Moon, who’s christened "Charlie," but carbon-dating poses a serious problem to the scientific community and recorded history: the semi-mummified corpse and equipment is over 50.000 years old! It's a problem of the impossible kind, because humans were primitive hunters-gatherers at that period in time and than there's the lack of archaeological evidence of an ancient, technological advanced civilization in Earth's prehistory.

There are droves of scientists examining Charlie and his equipment, which range from physicists and linguistic experts to mathematicians and evolutionary biologists, but the main character the readers follows around is Dr. Victor Hunt – who's the one who eventually pieces everything together and comes up with a beautiful, unifying hypothesis to explain all that they've discovered.

It's next to impossible to give a brief, teasing summary of the investigation between Charlie's discovery and Hunt's explanation, because of the enormous scale of events and potential spoilers involved.

The extensive reconstruction of the distant past, analyzing of evidence and tossing around theories is very reminiscent of the detective genre, but key elements of Inherit the Stars are firmly rooted in science-fiction and this makes the book very different in nature from other science-fiction mysteries that attempt to find a balance between the two – such as Manly Wade Wellman's Devil's Planet (1942) and Isaac Asimov's The Caves of Steel (1954).

On the other hand, you should be able, based on the given evidence, to arrive at a similar conclusion as Hunt and that's quite an accomplishment if you know what the explanation is – which is, as Ho-Ling noted in his review, something that goes beyond a simple murder case with an alibi-trick or a locked room.

I actually feel embarrassed about my second-rate solution that had the carbon dating pegged as a red herring that covered the fact that Charlie was actually from a far-flung future instead of the distant past. Luckily, I was as wrong about that as my first impression that the solution might've been a cross between the Piltdown hoax and legends of missing Soviet cosmonauts.

So, before this becomes another shabbily written, outdrawn review that uses a lot of words to say very little... I'll conclude by saying that, read as a mystery, you'll find something far, far off the beaten track – which isn't necessarily a bad thing. The only sad part about Inheriting the Stars is that we, in 2027, won't have any people "exploring the Martian deserts" or plummeting "down, down, deep into the ice crust of Ganymede" inside a protected capsule to witness something truly special.

Finally, I tagged this review as a "locked room mystery" and "impossible crime" for one simple reason: we're culturally appropriating this novel. It's ours now!
Geplaatst door TomCat on 9/08/2015