An Air of Suspense

"Tonight's story, I confess, intrigues me; it is another instance from my notebook of the miracles which turn out to be no miracle. You are warned, good friends, that I shall try to deceive you until the end."
- Narrator (John Dickson Carr's "Death Has Many Faces," collected in The Dead Sleep Lightly and Other Mysteries from Radio's Golden Age, 1983)

A week ago, I posted a review of an obscure, Golden Age mystery novel, namely The Crystal Beads Murder (1930) by Annie Haynes, which is a blog-post I titled for equally obscure reasons "The Devil in the Summer-House" – that also happened to be the title of a radio-play by everyone's favorite composer of seemingly impossible problems. 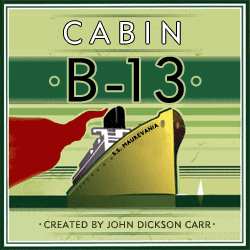 This prompted a comment from Sergio, who thought it cheeky to caption the post in such a Carrian fashion and how it gave him expectations for "a classic radio review."

I hadn't planned on doing such a review, but I need very, very little encouragement where John Dickson Carr's work is concerned. So why not, I thought, why not listen back to a small selection of Carr's radio-plays and ramble about this often neglected part of his writing career – which tends to be even more overlooked than his contributions as a writer of historical mysteries.

"Cabin B-13" is arguably Carr's most accomplished piece to hit the airwaves and a classic example of the old-time radio shows, which was performed twice on Suspense in 1943.

What's not as widely known is that the episode became the premise for an eponymous titled spin-off series on CBS. Cabin B-13 starred Arnold Moss as Dr. Fabian, an all-but-forgotten series character from Carr's body of work, who's a ship surgeon aboard the luxurious S.S. Maurevania and invited to listeners to come to his cabin to share some horrifying tales of "the strange and the sinister."

There are only a few episodes that survived the passage of time, but the ones that did are distinctively Carrian in nature.

"The Bride Vanishes" is one of the shipwrecked survivors of this show and the nature of the problem is one of those pesky, apparently impossible problems – a "miracle" if you will. A newlywed couple, Tom and Lucy Courtney, found an inexpensive, but lavishly furnished, abode on the sun-soaked island of Capri, Italy, which comes to no surprise when they learn about the haunted "balcony of death" attached to the villa.

A girl by the name of Josephine Adams "disappeared like soapbubbles" from that balcony in what appeared to be "a first grade miracle." She was "all alone" on that "balcony forty feet up a cliff," which was as "smooth as glass," but she couldn't have fallen or thrown off because "there was no sound of a splash" – and she couldn't have come back because "her mother and sisters were in front of the only door." This vanishing-act happened in less than 15-seconds.

It's remarked upon that Lucy is a spitting image of Josephine and people from the local, English-speaking colony are warning them to stay clear of the balcony or even return to Naples, but that would've made for a very dull story – wouldn't it?

Well, Lucy vanishes under similar, unexplainable circumstances as Josephine and the story begins to uncoil itself during the subsequent search, but even in a suspense story Carr managed to chuck in a few clues to help you piece together the method – which reminded me of a Baynard Kendrick novel and that helped me figuring out the method.

All in all, a good, nice and a well put together story that was nicely brought to life by the performance of the cast. So, yes, I enjoyed this particular play.

"The Sleep of Death" is another shipwrecked survivor from this series and tells a story of Ned Whitehead, a young American, who has bright, diplomatic career ahead of him and recently has fallen in love with a girl from an old French-Hungarian family – only her stern "dragon uncle," a Hungarian count, "who looks as black as a thundercloud" stands in the way of their marriage.

To proof himself to his future in-laws, Ned proposes to spend a night in "the circular bedroom," better known as the Tapestry Room, which is situated "high in the castle tower" of the family's French chateau. The walls are " hung with rare tapestries" and permeates with "a haunting atmosphere of witchcraft and death." For two hundred years, everyone who slept in that room died without a mark to be found on their body!

If the premise sounds familiar, you would be correct, because it's a slightly altered version of "The Devil’s Saint," originally written for Suspense, which cast Peter Lorre perfectly as the caliginous count. That's really all that can be said in disfavor of this episode: 1) it's a rewrite 2) it lacked Lorre. Otherwise, it's as excellent a suspense story as the original with a nifty twist ending and a logical, fairly clued explanation as to how the previous occupants of the Tapestry Room died – which made the original version a classic episode of that show.

Finally, "London Adventure," also known under the titles "Bill and Brenda Leslie" and "A Razor in Fleet Street," which is one of Carr's Baghdad-on-the-Thames stories and has Bill remarking in the opening scenes of the episode: "It [London] has put a spell on my imagination ever since I was a boy so-high," followed by "Sherlock Holmes, Dr. Fu-Manchu" and "hansom cabs rattling down the fog." Yes, the smell of adventure is in the air!

And, as if on cue, a police-official from Scotland Yard swings by and has brought some bad news for the newly arrived couple. It appears that Bill Leslie, an American diplomat, is a dead ringer for "Flash Morgan," a man wanted for several ripper-style murders, and he might be interested in stealing Leslie's identity – because slipping out of the country is a lot easier when you have the perks that comes with diplomatic immunity.

The inspector urges them to stay in the hotel, but Bill smells adventure and soon finds himself in tight, tension-filled spot when he flees inside a barbershop in Fleet Street. There's an apparently impossible throat-slashing inside the locked barbershop, while Bill and the barber swear they never left each other out of sight, but the locked room is merely the topping on a great (if short) adventure story that Carr's characters always seem to yearn for.

It's another episode I would definitely recommend, especially if your taste or somewhat similar to mine, Bill Leslie and Carr. It's that kind of story.

I hope this classic radio review has earned a few tips from Sergio's fedora and let me end by pointing out the review I posted yesterday of Robert van Gulik's The Chinese Maze Murders (1956), which also contains a locked room mystery. Because you can never have enough of those. Never!
Geplaatst door TomCat on 9/26/2015