Back in March, I reviewed Derek Smith's Model for Murder (1952), a surprisingly cerebral entry in the colossal Sexton Blake Library, which is probably why the novel remained unpublished for more than six decades until John Pugmire, of Locked Room International, got his hands on the manuscript – publishing it as part of The Derek Smith Omnibus (2014). A splendid volume that includes the all-time classic Whistle Up the Devil (1954) and Come to Paddington Fair (1997). 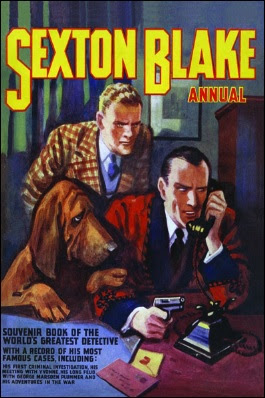 The Sexton Blake Library consists of roughly two-thousand short stories, novels, stage plays and comic books, written by over two hundred writers, but ended my review by saying I would likely never read another Blake story during my lifetime. A well-known problem with the Sexton Blake series is quantity over quality that helped it acquire a reputation of a badly dated, second-rate pulp-series.

Hardly a year has gone by since my review of Model for Murder, but I recently came across a short Sexton Blake story that actually looked promising. And the story delivered on its promise!

"The Grosvenor Square Mystery" was anonymously published on October 26, 1909, in Answers and is a bone-fide locked room mystery with a solution that cleverly moved away from the secret passages of eighteenth century detective fiction.

The setting of the story is the house of Sir George Hilton, in Grosvenor Square, which is an ancient mansion furnished "the heavy style of the early Victorian era" and has "prevailing air of solidity" with its solid doors, locks and bolts – solid shutters on all the windows. However, this was not enough to keep out a thief and valuables began to disappear from the locked apartment "sacred to the use" of Sir George and his wife.

An apartment has four interconnecting doors: two of them lead to the rooms Sir George and Lady Hilton, one to a boudoir and the last one to a bathroom, which pretty much eliminated a secret passageway or hidden trick-door. You can only enter the apartment through one of these four doors. All of the doors were fitted with "patent locks, bolts and burglar alarm," but despite these security measures valuable rings, necklaces, scarf-pins, a pearl pendant and a purseful of sovereigns were taken from that locked apartment. This culminated in the theft of "a packet of State papers."

These inexplicable string of thefts began to foster "an actual spirit of mutual suspicion" and mistrust between Sir George and Lady Hilton. So they decided to take Blake as an undercover house guest and have him bust open their locked room conundrum.

Blake makes short work of the case and the revelation of the thief doesn't come as an astonishing, gut-wrenching surprise, but, where the plot becomes interesting, is the explanation to the problem of the locked apartment – a solution that was original, inventive and clever for the period. You can say that the unknown author of this story took a locked room idea from the eighteenth century reworked it by applying some of that twentieth century ingenuity that G.K. Chesterton and John Dickson Carr would bring to the impossible crime story in the subsequent decades.

A note for the curious: the Kindaichi series has a locked room story that uses this exact same idea, but made it even better by elaborating on it and the result was awesome.

So, considering the poor reputation of the Sexton Blake series, "The Grosvenor Square Mystery," as a second-string Sherlock Holmes imitation, wasn't all that bad and the locked room angle was surprisingly good. Particularly for 1909. The plot lacked proper clueing and the culprit was obvious, but the impossible crime and solution makes this story potential anthology material.