Rupert Croft-Cooke is best remembered as the mystery novelist "Leo Bruce" and signed that name to one of my favorite series of detective stories about "an engaging vulgarian," Sgt. Beef, who loves to drink beer, playing darts and embarrassing his long-suffering chronicler, Lionel Townsend – who's more of a stickler for conventions than the boorish Beef. Townsend often wondered how anyone "as ingenuous as Beef" could "match his wits against the subtle brains of clever criminals" and "defeat them." But this is the inevitable result of his involvement in any case he decides to take on. 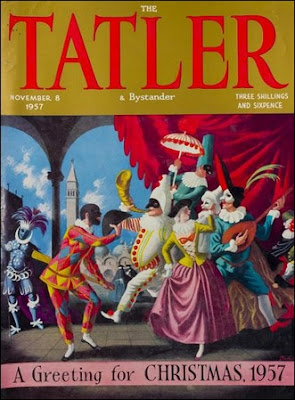 The series only has six novels and a smattering of short stories, which are mostly collected in Murder in Miniature and Other Stories (1992), but there were two short stories that remained uncollected until very recently.

"Beef for Christmas" was originally published in the November 8, 1957, issue of The Tatler and Bystander and was rediscovered by one of the obvious suspects, Curt Evans, who observed that the story would "grace any anthology of British detective stories" – a comment Martin Edwards, a writer and anthologist, took to heart. Edwards used the story to close out his anthology Silent Night: Christmas Mysteries (2015).

The story is fairly typical for a Christmas-themed mystery: Sgt. Beef is hired by "one of the richest men in the country," Merton Watlow, who's determined to spend all of his money before the grave calls him. Watlow has poured "a couple of Prime Ministers' salaries" into the upkeep of his opulent, fully staffed houses and overly expensive trinkets. Naturally enough, the family doesn't like it one bit. They're of the opinion that Watlow has to live on his interest for their benefit, which is a very vocal opinion within the family, but this only made him worse – turning his spending spree in "a sort of race." Recently, Watlow has been getting anonymous letters urging him to stop spending money or else!

Watlow decided to invite Sgt. Beef to come down to Natchett Grange to spend the Christmas holiday together with his family. I should mention here that Watlow gets a kick out of letting his relatives see him spend hundreds of pounds on a Christmas party. So what could go possibly wrong?

The kindred of their host consists of his nephew, Major Alec Watlow, along with his wife and daughter, Prudence and Mollie. There's his late sister's daughter and her husband, Mr. and Mrs. Siddley. And their feeble-minded son, Egbert.

As usually, Townsend is slightly discomfort by Beef's lack of manners, apparent alertness or showing "appreciation of the privilege" of being chosen by such an important man to clear up a problem in his household – even becoming embarrassed when he produced a bulky notebook and a stump pencil to take down names. However, the real shock comes after an evening of entertainment, complete with a stage, when they find one of the members of the household hanging from a rope in his room. But the victim is not who you expect it to be!

So this is a case of murder disguised as a suicide and the crux of the plot is a clever alibi-trick worthy of Christopher Bush and Detective Conan, which both have used variations on this particular idea to create cast-iron alibis for their murderers. The trick here is equally well-handled with some good hints, rather than out-right clues, how it was done. However, I can't help but feel that Bruce's take on this trick might have worked better had the plot been tooled as an inverted detective story.

Nonetheless, the plotted fitted nicely together and Beef was amusing as ever, which made this a good, fun and Christmas-themed detective story that can be used to kill half an hour with during those dark, cold days of December.
Geplaatst door TomCat on 12/11/2018