Kirke Field Mechem was a Kansan historian, poet and playwright who, during the heydays of the genre, wrote an excellent detective novel in the tradition of The Van Dine School of Mystery Fiction, but The Strawstack Murder Case (1936) was first published under a bland, meaningless "publisher-mandated" title – namely the awful A Frame for Murder. A mistake that was corrected in 2013 when Coachwhip Publications republished the story under its original and intended book-title. 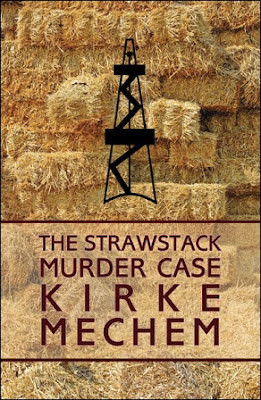 Curt Evans provided this new edition with a lengthy, informative introduction and mentioned that the publisher "didn't think strawstacks would sell books." Ironically, just three years later, Dorothy Cameron Disney published "a very well received mystery," entitled The Strawstack Murders (1939), but, in defense of the publisher, there might have been a good reason for their decision. Nicholas Blake had debuted the previous year with A Question of Proof (1935), which also had a body-in-the-haystack plot.

So, if you take that into consideration, you can understand why the publisher wanted a different title for the book, but not why they settled on such a bad, uninspired and nonsensical title. Anyway...

Mechem joined the "goodly company of traditional mystery authors" of The Van Dine School with The Strawstack Murder Case, but Mechem also stands out in this class for two reasons. Most of the Van Dinean writers come from the East or West Coast, mainly New York or California, but The Strawstack Murder Case is set in Witchita, Kansas – smack in the middle of the Heartlands of the United States. This gives the book a strong rural and regional flavor. Secondly, Mechem had a better sense of humor than most writers of this school with the exception of Stuart Palmer and Craig Rice. The best example of this can be found in the opening chapter.

The detective of the story is Steven Steele, the Philo Vance of the Great Plains, who is ranting in the opening chapter to his chronicler, Bill, about "the kind of tabloid authorship" that are turning his cases into sensational, tarted-up pulp-stories and particularly dislikes their account of The Wade Packinghouse Murder Case – re-titled in the fictionalized version to The Slaughterhouse Mystery. Steven Steele has become Vincent Veale. A gun-toting pulp hero without a hint of Steele's impressive reasoning and deductive abilities. He sadly concludes that "readers nowadays don't want reasoning mixed with their detection" and advises them to "go out and get some gangster's reminiscences." So I immediately warmed to both Mechem and Steele!

Regardless of this trend in popular fiction, Steele get to test his deductive abilities and reasoning skills when the news breaks that a prominent Wichita oil operator, Ralph "Lucky" Loundon, has been brutally murdered near his hunting lodge.

The body of Loundon was found "buried in a strawstack" by two teenage boys and this provides the plot with a quasi-impossible situation, because the stack of straw is of an "extraordinary dimension" and extended nearly fifty feet from east to west with steep sides – making it practically "impossible to climb." So how did the body end up at the top of the strawstack? A tree near the strawstack has broken branches and the discovery of "a matted bunch of coarse light-brown hairs" on the body suggests an ape! Naturally, an ape-like creature has very little to do with the murder and the explanation is far more ingenious than that the trick from that famous Edgar Allan Poe story.

However, as baffling as the physical evidence at the scene of the crime is the personal circumstances of the victim and the cast of characters that had surrounded him. 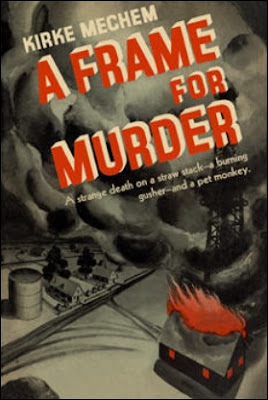 Lucky Loundon is described as "an overgrown boy," with a good heart, who had helped half "the oil men in the territory at one time or another" and pioneered the Meridian oil field by raising “a forest of greasy derricks” across the river from his lodge. There are, however, still more than enough people with a potential motive to murder Loundon.

Loundon used to be married to Lola van Roth, daughter of radio pastor Reverend Raymond Dwight van Roth, who also has a troublesome son, Jack, who may, or may, not have gotten on the wrong side of the law. And there motive is tied to a $50,000 life insurance policy that goes to Lola upon Loundon's death. On a side note, Curt Evans observed in his 2012 review that Mechem painted "a memorably withering satirical portrait" of the pastor that he wondered if the pastor had been based on "a specific Midwestern clerical radio personality," which would be Charles Coughlin – commonly known as Father Coughlin. I have no idea if this true, but the comparison is an interesting one. And, if this was the case, Mechem properly disguised him. I would not have thought of this comparison myself.

There are more suspects Steele has to consider: a potential love-interest, Dora Monest, whose uncle, Juan Monest, is an investor in Loundon's many businesses. Fielding Garnett is Loundon's partner in his oil operations and Charles Ripley is the vice-president, general manager and chief engineer of Loundon's Dragonfly Aircraft Company. I like to believe this company made the dragonfly seaplane from Palmer's The Puzzle of the Pepper Tree (1934). Lastly, there's a surgeon, Dr. Herbert Vernon. All of them are tied together, either financially or with personal secrets, which makes for a knotty, delightful detective story. But the story even gets better after the halfway mark!

An oil well explosion provides the backdrop of a second murder, disguised as suicide, and the description of this fiery disaster was very well done and fascinating to read. Coachwhip seems to have penchant for republishing disaster-themed detective novels. Tyline Perry's The Owner Lies Dead (1930) has a disastrous mine explosion, Allan Bosworth's Full Crash Dive (1942) has a handful of survivors aboard a sunken submarine and Carolyn Thomas' Narrow Gauge to Murder (1952) concerns a tragic narrow-gauge railroad accident – here have an oil well erupting in deadly fire killing three men and wounding numerous others. Coachwhip should seriously consider reprinting Zelda Popkin's Dead Man's Gift (1942) to add a deadly flood to the lineup. Two more and you have the Seven Plagues of Detective Fiction! :)

All things considered, The Strawstack Murder Case was more than worthy of being resurrected. The story is very well written, cleverly plotted and properly characterized strengthened by the rarely used regional backdrop of the American heartlands. I think the book will be greatly enjoyed by readers who enjoy the traditional, puzzle-oriented detective novels by the Van Dine-Queen School and especially to readers who are fond of Clyde B. Clason. From all the writers from this school, Mechem is stands closest to Clason. In any case, The Strawstack Murder Case comes highly recommended!

A note for the curious: Mechem wrote a second detective novel with Steven Steele at the helm, entitled Mind on Murder, but the manuscript was rejected by the publisher, because it dealt with a touchy subject – and, as a result, the book is now lost to history. One these days, I'm going slap together a follow up to my post on lost detective stories. Sadly, I learned of even more examples since that post went up in 2016. Some of you will be surprised to learn how many lost manuscripts John Russell Fearn has under his belt!
Geplaatst door TomCat on 12/05/2018