Hidden Under the Sun

"But, man alive, don't you feel it in the air? All around you? The presence of evil."
- Stephen Lane (Agatha Christie's Evil Under the Sun, 1941)

At the end of my blog-post about Death of My Aunt (1929) by C.H.B. Kitchin, I asked if anyone, based on the review, could guess my next read, which, logically, was Richard Hull's The Murder of My Aunt (1934), but Ho-Ling made a clever and perceptive prediction about this blog-post – based on a pattern he had observed.

Lately, the book titles of the mystery novels I reviewed followed an alternating pattern, which goes as follows: John Rhode's Death in Harley Street (1946), Basil Thomson's The Milliner’s Hat Mystery (1937), Alan Melville's Death of Anton (1936), E.R. Punshon's Four Strange Women (1940), C.H.B. Kitchin's Death of My Aunt and Richard Hull's The Murder of My Aunt. So, following this sequence, the subject of this blog-post should have "death" in the title. 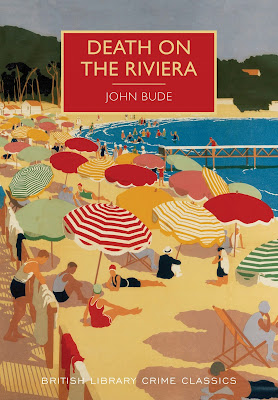 First of all, I had not created this pattern with intent or purpose, but I’m enough of an obsessive-compulsive autist to go along with it and lifted John Bude's Death on the Riviera (1952) from the big pile.

The first detective story I reviewed this year was Bude's debut novel, The Cornish Coast Murder (1935), which had all strength and weaknesses one expects to find in the apprentice work of a promising, first-time novelist – such as an engaging writing style, interesting character and an obvious appreciation for the genre. But the plot also suffered from one or two imperfections. One of them being a disappointing lack of fair play.

Death on the Riviera was written two decades after the publication of The Cornish Coast Murder and Bude had evidently grown as a novelist in those intervening years. As Martin Edwards observed in his introduction, Bude was "at the height of his powers" when he wrote Death on the Riviera and "the assurance with which he blends the plot-lines" reflects "his experience and confidence as a writer" – which is demonstrated here in the way Bude knotted the ends of two separate plot-threads together. Essentially, the book consists of two novellas with a conjoined plot and a shared cast of characters, which is always an interesting approach to tell a detective story (c.f. Robert van Gulik).

The first plot-strand brings Bude’s series character, Detective-Inspector Meredith of the CID, to the golden beaches of the French Riviera, where "the blue waters of the Mediterranean" lapped "at the sun-drenched coastline," but he's not there for a relaxing holiday.

Detective-Inspector Meredith and Acting Sergeant Freddy Strang are en route to the warm, glittering Mediterranean to extend a helping hand to the local authorities, represented by Inspector Blampignon, which concerns a ring of counterfeiters operating along the coastline. The gang left a trail of false banknotes and they had been largely exchanged for British pounds, but that's not the only link to England: all of the forged notes bore "microscopic details of craftsmanship" that read like the signature of Tommy "Chalky" Cobbott – one of the best "engraver of notes." He seems to be the beating heart of this organization.

I found this particular plot-thread to be somewhat reminiscent of Basil Thomson's The Milliner's Hat Mystery, in which the English and French police are breathing down the necks of a gang of smugglers.

The second plot-thread leads to the doorstep of Nesta Hedderwick, called Villa Paloma, which puts a roof over the head of several family members, acquaintances and even a live-in artist – who creates monstrous, post-modern atrocities in his attic-room. Or so everyone assumes. But he's not the only one who’s not exactly been telling the truth: secret marriages, unwanted pregnancies and the counterfeiting case all hover in the background of the villa, which often read as one of those daytime soap operas. A comparison that was also made by the Puzzle Doc. However, this eventually resulted in a very classic murder when someone goes missing and a smashed, faceless body is found at the foot of a cliff. 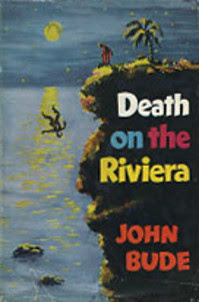 Well, I have to praise the author here for respecting the intelligence of his audience in regards to the defaced features of the victim. As one of the characters states, "whenever a corpse turns up in a crime story with its face battered beyond recognition" you can safely assume that "it isn't the corpse you think it is," which is acknowledged by them as "a well-worn double-cross." I also appreciated Bude attempt to find a new angle to tackle this problem, but, overall, the explanation was fairly simple and basically it was a short story that was absorbed into a full-length novel. It's also why I remained on the surface of these two cases, because they're extremely simple and lightweight.

The book as a whole is very well written and fun to read, but the plot-threads lack complexity. So there's not much to go on about without giving those few essentials away. Well, there's one thing that should be mentioned: both plot-threads contain borderline impossible material. One of the objects that hold the police's interest in the counterfeiting case is a hidden printing press, which turns up in a place that had been previously searched without result. The hiding place was one of those so-called "invisible cubbyholes" that can also be found in "Nothing Up My Sleeve," a radio-play by John Dickson Carr, and "Cache and Carry," which is a short story by Bill Pronzini and Marcia Muller from The McCone Files (1995). Unfortunately, it was not used for an impossible crime sub-plot, which could have added some substance to the counterfeiting case.

Same goes for the semi-impossible material in the Villa Paloma murder case, but that one is a lot harder to describe, because, again, I run the risk of giving too much away. It concerns something a witness saw and this plot point could have been cobbled into an impossible crime, but Bude evidently decided to keep things plain and simple.

Nevertheless, Death on the Riviera is a very readable and enjoyable detective story, but not one you should read if you want to be baffled by a particular ingenious or complex plot. Otherwise, this one can be recommended for what it is and perfect for people who want something to read while launching in a beach-chair.

On a final note, I hope Poisoned Pen Press will consider reissuing Bude's Death on Paper (1940) and Death Knows No Calendar (1942). Why these two? Oh, no particular reason. What's that you say? They were listed by Robert Adey in Locked Room Murders (1991)? Well, I had not noticed that myself, but that would be pretty good reason to reprint them as well.
Geplaatst door TomCat on 6/13/2016