"Sure, it's dangerous. It's been dangerous, it is dangerous, and it's going to be a whole lot more dangerous."
- from Ianthe Jerrold's There May Be Danger (1948)

Patricia Wentworth is primarily remembered as the author of thirty-three novels about Miss Maud Silver, a governess who became a consulting detective, which made her "one of the mystery genre's most prominent spinster sleuths," but her casebook only covers half of Wentworth's contribution to crime-fiction – which further consists of several short-lived series and a large pile of standalone novels. It's a part of her output that has long been overlooked, but, recently, the gang from Dean Street Press has dragged them from the bowels of obscurity. So let's take a look at one of them. 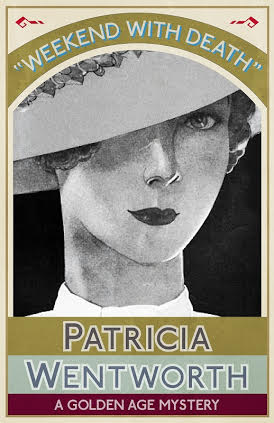 Weekend with Death (1941) appeared in the United Kingdom under a different title, namely Unlawful Occasions, but both editions of the book became rare, high-priced items on the secondhand book market. The price of a secondhand copy still hovers between sixty bucks and a full grand. Fortunately, you don't have to be a deep-pocketed collector of first-edition hardcover books to explore this new series of reprints.

Speaking of explorations, the plot of Weekend with Death roams across the neighboring borders of several sub-categories of the large, outstretched territory of the crime and mystery genre. There are components of suspense, thriller and espionage stories, but the plot also employs (faked) supernatural phenomena and this element is used to good effect – elevating the story above the usual fare for a spy-thriller. However, the story begins on a fairly traditional note.

The book opens in a small, cold waiting-room of a mist-enshrouded train station where the heroine of the story, Sarah Marlowe, finds herself in company of Miss Emily Case. A neat, shabby little woman who spend five years in Italy as a private nurse, but the shift from the pleasant, Mediterranean climate to the dreary weather of England is not the only shock Miss Case encountered upon her return home. She confides in Sarah how she found a wounded man, "looking just like death," in a railway carriage of a London train and the young man pressed a oiled-silk packet into her hands – urging her to not allow to "let them get it."

Well, that's enough to throw everyone off-balance, but Sarah is very skeptical and is not interested in getting "entangled with stray lunatics babbling of murdered men and mysterious packages." After all, she has to think of her position as the private-secretary to the President of the New Psychical Society, Wilson Cattermole, which largely consists of typing out letters about haunted houses, listening to his monologue and taking an interest in his wife, Joanna – who's convinced she has made contact with the ghost of a genuine eighteenth-century smuggler. So not exactly a line of work begging for an additional layer of mystification, but that's exactly what Sarah finds when she leaves Miss Case in the waiting-room to board her train.

Sarah discovers the mysterious, oiled-silk wrapped packet inside her handbag and the people who are after its content seem to be already on her tail. But that's not even the most distressing part. She reads in the newspaper about Miss Case's murder and the police is looking for the woman who talked with Miss Case in the waiting-room of the train station, which is accompanied by a good description of Sarah. A good and solid premise for detective-cum-thriller story, but at this point the story slowly begins to harkening back to the days of the sensational novels from the Victorian Era. 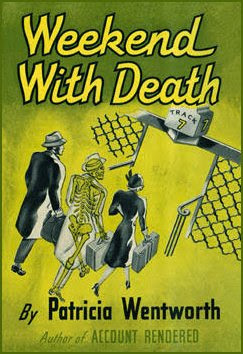 Mr. and Mrs. Cattermole gave Sarah a five seconds' notice to pack her bags and accompany them, in her capacity of secretary, to an old, gloomy and reputedly haunted house, which is called Maltings and the occupied part of the home dates back to only the seventeenth century. The wing that leads to the oldest part of the house is securely locked and apparently rife with supernatural occurrences. It's an excellent place to tell a ghost story or two and their host, Reverend Peter Brown, has plenty of them involving shape-shifting creatures, werewolves and vampires, but Sarah quickly learns a lesson we all learned from Scooby Doo – some of the most terrifying monsters are just mortal human beings underneath. But in this case that does not make the monsters any less dangerous or deadly.

This second half of the novel is an old-fashioned tale of suspense with the trappings of the thriller and spy story, but they are framed as a sensational tale from the Victorian period. You can find the influences from that period in the old, labyrinthine house and Sarah wandering through its dark passages at night. She even uncovers a secret passage! There are also some excellent, atmospheric set pieces in this portion of the book: a séance manifesting the ghost of Miss Case, a daring, ill-fated late-night attempt to escape from the place and the villains of the play coming up with a particular nasty and cruel way to rid themselves of Sarah.

So it leans heavily on some very old, time-worn tropes and a handful of incredible coincidences, such as how Sarah (unwittingly) brought the packet closer to its intended destination, but Wentworth knew how to write a yarn. I also believe the ghost-hunting angle lifted these tropes above themselves and helped make Weekend with Death a fun, captivating read. Only the ending and how the events were wrapped up was slightly underwhelming.

I'm not really good at reviewing crime stories that lack the proper structure of a traditional, fair-play and clue-filled mystery novel, but I liked this atmospheric suspense-cum-spy thriller and I think I begin to prefer Wentworth's standalone work to her Miss Silver novels.