"Poison is in everything, and no thing is without poison. The dosage makes it either a poison or a remedy."
- Paracelsus (1493-1541)

Back in November of 2015, I posted a review of Crime at Christmas (1935) by C.H.B. Kitchin, a British novelist and affluent dilettante, who authored a quartet of mystery novels about Malcolm Warren – a lowly-paid office worker in a stockbroker's firm.

The first one of these four novels, Death of My Aunt (1929), can stake the claim of having weathered the sands of time and has been fairly well remembered by readers of detective fiction. During the previous decade, I regularly stumbled across comments or simple references to the book, which tended to be positive, even if some of those comments turned out to have been references to Richard Hull's similarly titled The Murder of My Aunt (1934). A common mistake in those days. 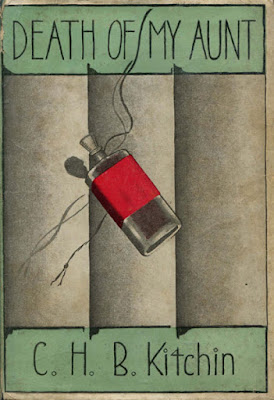 Well, I remembered enough of those days to avoid making the same mistake as them, but it would have been somewhat amusing, or gallingly annoying, if this shoddy introduction was followed by a review of Hull's The Murder of My Aunt – which would completely ignore both the opening of this blog-post and Kitchin’s Dead of My Aunt. I should probably start planning some of these blog-posts and reviews in advance. That's a missed opportunity right there. But that's enough palaver for one introduction. Let's get this review on the road.

Usually, the first entry in a series, even a short-lived one, suffers from several weaknesses: a writer is figuring out the ropes or a portion of the story is dedicated to delineating the characters, which tends to come at the cost of the plot, but Kitchin niftily sidestepped the latter in Death of My Aunt – in which he intertwined the introduction of his detective character with the setup of the plot. The title of the book probably gives away how he managed to achieve that.

Death of My Aunt finds Kitchin's nominal hero and narrator, Malcolm Warren, strolling home from his "two pounds a week" office job to his modest bachelor-chamber in Gloucester Place, which is where a telegram is waiting for him on his doormat. It's an immediate summons to the home of his tante a heritage, Aunt Catherine, for the upcoming weekend.

The reader is then given an introductory rundown of Warren's family and he tells how his aunt inherited half a million from her first husband, over which she had unfettered control and absolute power of disposition. It placed her in a position to crown herself "queen of the family" and Warren gives a list of those who "submitted to her rule." I thought this was an original, smart and double-pronged approach to both laying the groundwork of the plot and sketching a picture of the series character – which nicely intertwine from start to finish.

Some writers have been praised over the pass hundred years for their crisp, economic writing style, but the framework of this novel demonstrates there’s also such a thing as economic plotting.

Warren arrives fairly late at the home of his aunt, who has already gone off to bed, but she left him a wax sealed envelope, which contains a letter and a key to a bureau in the boudoir. The letter informs Warren that he'll find an investment book in the drawer of the bureau and she wants him to study its content, but insists nobody else is shown the book or told what's in it. So, of course, the key seems to have been replaced the following morning.

But that's not all. Warren also finds something in the drawer that he had, somehow, missed on the previous evening: a flat bottle of pink glass, "not unlike a large scent-bottle," which "bore an ornate label," stamped with the name of "Le Secret de Venus," in gold letters. When he shows the bottle to his aunt, she identifies it as "a very special tonic" and immediately prepares a dose by shaking some of the crystals in a tumbler of hot water, but the bitter preparation seems like a drastic measure to prevent any future diseases – because her body begins to violently spasm and dies in a matter of minutes. Warren is shocked by the sudden and swift death of his aunt, which happened when he was reading the pamphlet of the preparation, but the doctor is very suspicious and soon there's a police-surgeon, an inspector and constable buzzing around the house. 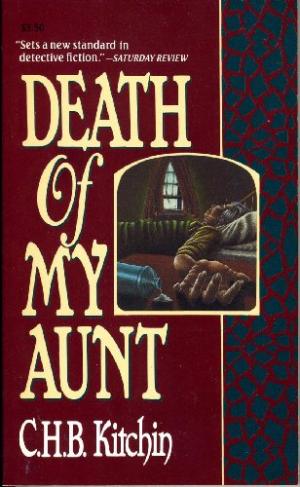 A favored approach Warren takes to tackling the problems, which surround the sudden death of his aunt, is making lists or committing his thoughts to paper. So they can be "pruned of some extravagant offshoots." The first one, after the family introduction, has him deciding as what kind of detective he’s going to operate: a professional policeman or the brilliant amateur, which he calls a "plain man or superior person," but ended up deciding in favor of the latter – since he could not possible hope to "beat the police at their own game." So he passed on measuring footprints or hunting for cigarette ends to talk with his family and eavesdropping on the police. It's amateur detection at its most amateurish.

One of the things emerging from his narrative and meditations, is that Warren is not the stodgy, old-fashioned conservative that a lot readers think he is. I've always seen him being referred to as a conservative stockbroker, such as in this review of Death of His Uncle (1939), but he shares some of his very liberal views on crime and punishment – stating that he does "not believe in retributive punishment." He does not even believe "murder is always the most awful of all sins," but confesses he would "not be terribly distressed" if some of his least favorite relatives, like his Uncle Terence, were "taken away quietly and executed" – which is not very consistent with his opinion on the death penalty. Combined with him creeping about the house "like a guilty ghost," as he eavesdrop, writes and rummages, which does not make him a very convincing, or likeable, hero. Warren realizes this himself.

As the ending of the book drew closer, Warren has a moment of self reflection and admits that, so far, he has not been able "to lay a fair claim to any admiration" nor were his actions "worthy of applause." He also admits that none of his thoughts has been "illuminating in its grandeur," but promises that his "hour of heroism" is close at hand: he pens a false confession and uses it as bait as he tries to goad one of his relatives into murdering him!

If I had not known Death of My Aunt was the first in a series of four novels, I would have suspected Kitchin of playing a magnificent piece of bluff. Because Warren would have fitted the role of murderer and unreliable narrator perfectly. After all, who's one of the person who could have used the money? Warren! Not just for himself, but his mother and sisters would also inherit from Aunt Catherine as well. Who had a key to the drawer that contained the bottle? Warren! Who handed Aunt Catherine the doctored bottle of tonic? Warren! It could have been one of the most simplistic detective stories in history of the genre, which was only complicated because the murderer was purposely leading the reader down the garden path.

Well, the actual solution is competent enough for a debuting mystery novelist, but the finer details of the murderer's motive hung vaguely in the background, until it was brought to the foreground during the explaination, although it was clear from the start the reason for the murder came down to money. So that's hardly worth mentioning. However, what I should point out is how one component of the solution is never properly shared with the reader, which is the relationship between the murderer and the poison.

The poison in question, oxalic acid, has a practical use and Warren learns that one of his relatives has an occupation requiring that very specific poison, but the reader is never given a hint about this particular occupation of the murderer. Not as much as a nod. I think that could have been safely done, because how many readers would know enough about poisons to make the connection.

Anyway, in spite of the sketchy details surrounding the motive and some of the clues, Death of My Aunt is a good, interesting and well written debut novel. Its successor, Crime at Christmas, showed an improvement on the (minor) flaws I was nitpicking about just a moment ago. So I now want to see what Kitchin was able to do with Death of His Uncle and The Cornish Fox (1949), but, for my next read, I feel compelled to look at another mystery novel first. You can probably guess which one that'll be.
Geplaatst door TomCat on 6/05/2016