Outlaws of the Forest

"When as the sheriff of Nothingham
Was come with mickle grief,
He talk'd no good of Robin Hood,
That strong and sturdy thief."
- Robin Hood and the Golden Arrow (Joseph Ritson's Robin Hood: A Collection of the Popular Poems, Songs and Ballads Relative to That Celebrated English Outlaw, 1826)

The Assassin in the Greenwood (1993) by Paul Doherty is the seventh entry in his chronicles of Sir Hugh Corbett and takes place in 1302, which was one of those historic, tumultuous period in Europe's history and King Edward I is besieged by problems – such as the expansionist tendencies of France and the return of an infamous outlaw.

A covert war of intelligence, counterintelligence, and espionage is being waged on the continent of Europe. The chess pieces in this war are spies and double-agents, either in the employ of the English or the French, who dance around important crumbs of information pertaining to the situation on France's northern border – where an army is amassing. King Edward's intelligence network is aware they're waiting for the signal "to cross into and destroy the Kingdom of Flanders," but not if these plans extended to England's southern coast. 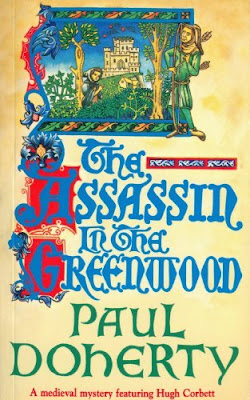 So it is interest of King Philip IV of France to keep the English in the dark and for this purpose he has dispatched one of his best assassins across the Channel. His target? The Keeper of the Secret Seal and devoted emissary of King Edward I of England, Sir Hugh Corbett. However, Corbett is on a mission himself. A mission that brings him to the dark, dense and dangerous thickets of Sherwood Forest surrounding the castle of Nottingham.

One of the King's principal tax-collectors, Matthew Willoughby, was leading an armed convoy to the forest and they followed a secret route, which went across obscure pathways and tracks, but they were halted by a "volley of arrows" – courtesy of a band of roughly fifty robbers. The iron-bound chests were taken from their covered wagons, the tax-collector was horrible maimed and his entire retinue was massacred.

As shocking as the brutality of this massacre is the identity of the man who acted as the leader of this group of outlaws: an archer clad in Lincoln green who claims to be none other than the legendary thief, Robin Hood! He even has Little John by his side.

King Edward is in a black rage, as he had given the outlaw a King's Pardon in the past, and he has one simple task for Corbett: "go to bloody Nottingham and see Robin Hood hang." But upon his arrival in Nottingham, Corbett discovers that not all of Robin Hood's crimes are simple mugging cases. The Sheriff of Nottingham has passed away under very mysterious and seemingly impossible circumstances inside his chamber.

The body of Sir Eustace Vechey was "in the blackest pit of depression" when he and his manservant, Lecroix, retired to his room, which was locked from the inside and key was left in the lock. There were two guards posted outside of the door and the windows are mere arrow slits. As someone remarked, "not even a rat could squeeze in there," but there must have been an invisible agent in the room to administer a very potent poison to the sheriff – which was not found or tasted in the goblet of wine and pieces of sweet meat that were left in the room.

Doherty is a bit of a specialist where (impossible) poisonings are concerned and the locked room situation, and its explanation, was somewhat reminiscent of the one used in The White Rose Murders (1991), but different enough to stand by itself. It also had a fairly clued explanation and one that you can piece together yourself long before Corbett stumbles to the truth. So that was a nice element of this very eventful novel of thick, braided plot-threads and there are many plot-threads in this book.

First of all, there are the previously mentioned cases of a forest teeming with murderous outlaws and the baffling poisoning of the sheriff, but there's also the question of why Robin Hood has returned and why he has become so cruel. He used to be a champion of the common man (i.e. the poor), but now he seems to be suffering from a severe case of bloodlust. These come on top of a complicated cipher Corbett and Ranulf have to break and an unknown person who shoots three burning arrows over the castle wall on the thirteenth of every month. And then there are the bodies. Doherty has never shied away from stacking up a body count (e.g. The Plague Lord, 2002), but here we have murders, executions and deaths in every single chapter – often more than one body at a time. Death is literally all around Corbett and Ranulf in this one!

One advantage of the bustling plot of The Assassin in the Greenwood is that it makes it a very eventful story, in which the plot is always on the move and events are constantly unfolding. It makes for a very readable story. However, the downside of this is that, to prevent the ending from becoming a convoluted mess, the solution had to be as simple as possible. And that was the case. You don't have to be a particular genius to deduce the identity of the mastermind behind all of this bloody chaos, but, overall, it was competently done and loved the motivation of the killer. It nicely intertwined with the presence and legend of Robin Hood. But the real draw and eye-catcher of this historical mystery is having Robin Hood as one of the main suspects/antagonists.

So, a pretty good, fun and eventful read, but not one of the best entries in the series. I suspect The Demon Archer (1999) was Doherty rewriting this story from scratch and cutting out all of the extraneous matter, because the both stories shares some resemblances, but the plot is a lot leaner and overall better executed – which is a good example that sometimes less is more.

On a final note, Robin Hood seems out-of-time in this novel, because he's typically portrait as a figure from the days of Richard the Lionheart and King John, but Doherty addresses and explains this in author’s note.
Geplaatst door TomCat on 6/28/2016