The Case of the Monday Murders (1936) by Christopher Bush

The Case of the Monday Murders (1936) is the fourteenth title in Christopher Bush's long-lived Ludovic Travers series and, in this instance, the story-telling turned out to be more interesting than the plot itself, which was as translucent as a ghost and lacked the complexity associated with Bush's earlier detective novels – c.f. Cut Throat (1932) and The Case of the Chinese Gong (1935). A somewhat unusual detective novel presented as a serial killer story, however, this is not entirely the case. 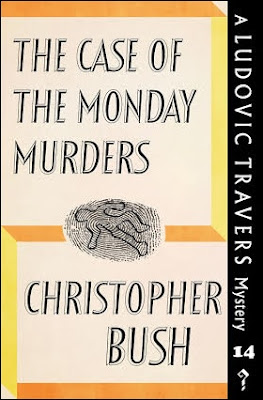 Our neighborhood genre-historian, Curt Evans, who wrote the introductions for these brand new editions, published by Dean Street Press, pointed out that Bush's breakthrough novel, The Perfect Murder Case (1929), is not (as often argued) a serial killer novel. And goes on to state that The Case of the Monday Murders "unquestionable qualifies" as such. Only problem is that the titular murders only serve to dress up the actual plot and, if this one qualifies as a serial killer novel, than every Golden Age mystery with a body-count of two or three victims does. And, more importantly, the Monday murders aren't even the work of a serial killer. So I didn't tag this post with the "Serial Killer" toe-tag.

However, the story-telling has some interesting aspects and Evans called the book "crime fiction at its most puckishly meta," because part of the story's background may have been inspired by Bush's first experiences with the Detection Club and there's a character who could've been modeled on the well-known, grumpy bugbear of the club, Anthony Berkeley – who was "a cross to bear" for his colleagues. The name of this takeoff is Ferdinand Pole, a celebrated mystery writer, who's the founding father of the Murder League.

Pole has made a discovery that a "perfectly uncanny number of unsolved murders" that "have taken place on Mondays" since 1918 and claims one and the same person is behind all these murders. A serial killer or perhaps even a new Jack the Ripper. Pole communicates his finding to a newspaper, Evening Blazon, which brings us to the secondary theme of the story that critically glances at the sensationalists, scandal-mongering print-press of the time. Evening Blazon splashes their pages with thickly printed headlines like "MURDERS ON MONDAY," "WILL THERE BE MURDER ON MONDAY?" and "WE CHALLENGE SCOTLAND YARD."

Later in the story, a person, who calls himself "Justice," claims to be the murderer and provides details of his crimes. He even describes himself as an elderly man with a squint. Bush also gives the reader a glimpse of the typical English response to this latest sensation. The figure of the man with the squint became a public joke and the BBC's pet comedian, Giggling Gilbert, made people roar with his song "I don't want to be murdered on Monday."

However, as said above, the serial killings only serve as a background, or framing, for the investigation into two other murders.

T.P. Luffham was a once well-known schoolmaster of a prestigious public school, but had to resign with "ugly rumors" abound that were never officially denied. The nature of those rumors aren't made clear, but there's a possibility Luffham pulled a Sandusky on the students. After he had withdrawn from public life, Luffham assumed the name of Clough and began to life as a hermit. And the story went around that he had died somewhere abroad. 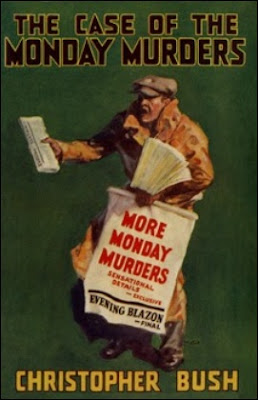 So the news of his accidental death came as a surprise to Travers, who also assumed he had passed away, which prompts him to accompany a junior crime-reporter of the Evening Blazon, Tristram Cane, to the scene – where they discover that the old man had fallen down a flight of stairs. However, Travers and Cane find a black elastic-band and a drawing-pin, which could been used to stretch the elastic across the top of the stairs.

This is a murder on a Monday and not long thereafter the newspaper headlines scream: "GREATEST PROPHECY OF THE CENTURY!" and "T.P. LUFFHAM WAS MURDERED!!"

The second murder is that of an elderly actress, Laura Delayne, who was stabbed to death in her hotel room, where she lived, but here the story began to loose steam. After a while, it becomes clear that the serial killing are only there to muddle the waters and the investigation is primarily focused on digging into Delayne's past or finding a connection with the first murder.

This would not have been problem had there been more than two suspects, but the murderer sticks out from the very beginning and becomes impossible to ignore as the story progresses – especially when the only other suspect becomes the victim of an attempted murder. An attempt that could not been faked by this person in order to throw suspicion off him.

So, on a whole, The Case of the Monday Murder turned out to be a rather disappointing read. Sure, the story-telling was good, particularly during the first half, but the plot is so thread-bare that you can see through it from the beginning. Honestly, it's kind of hard to believe that this came from the same man who intricately plotted Dancing Death (1931), The Case of the April Fools (1933) and The Case of the Missing Minutes (1936). Yeah, this is, unfortunately, the first time Bush let me down, but only a single dud out of nine titles read is not a bad score at all. So let's end this review on that semi-positive note.
Geplaatst door TomCat on 2/22/2018