Major Cecil John Charles Street was simply John Street to his personal acquaintances and is remembered by mystery readers as either "John Rhode" or "Miles Burton," two of his pennames that were signed to over a hundred detective novels, but Street was tarred and feathered as a humdrum writer by the detractors of the cerebral detective story – which likely played a part in obscuring Street's work after his passing in 1964. At least until recently, that is. 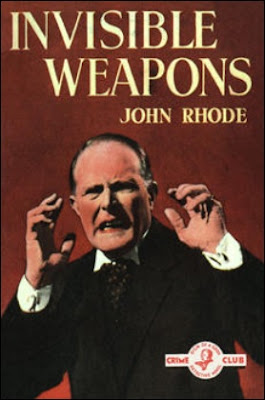 This decade has blossomed into a renaissance era for the traditional detective story and an ever-expanding band of long-neglected mystery writers are finding their way back into print.

John Bude, Christopher Bush, E.R. Punshon, Harriet Rutland and Roger Scarlett are just a handful of examples of mystery writers who have recently been rescued from biblioblivion, but, now that humdrum is no longer a derogatory term, J.J. Connington and Freeman Wills Crofts also reappeared in print. Crofts is even shedding his undeserved, completely slanderous, reputation as the writer who cured insomnia.

Street is considered by many as the headmaster of the humdrum school, but is lagging behind Connington and Crofts when it comes to getting his work reprinted. British Library reissued The Secret of High Eldersham (1930) and Death in the Tunnel (1936) and Ramble House printed new editions of Death Leaves No Card (1940) and A Smell of Smoke (1959) – all four of them published as by "Miles Burton." A pseudonym Street used for his secondary series-characters, Desmond Merrion and Inspector Arnold.

However, Street is best remembered, if remembered at all, for the detective novels he wrote as "John Rhode" and they, too, are finally starting to reappear in print!

HarperCollins is currently reprinting an entire series of obscure, long-overlooked mystery novels as Detective Club Crime Classics and Rhode's primary series-characters, Dr. Lancelot Priestley, is part of the lineup! Brand new editions of Death at Breakfast (1936) and Invisible Weapons (1938) have already hit the shelves, which will be followed later this year by The Paddington Mystery (1925) and Mystery at Olympia (1935). So the mystery readers who love meticulous plotted detective stories have something to look forward to!

Invisible Weapons was released only a week, or two, ago and immediately snatched a copy for my personal locked room library. Yes, this is one of Rhode's altogether too rare excursions into the impossible crime genre and the apparently inexplicable murder from the first, of two, parts of the story would have been right at home on the pages of a Carter Dickson novel. You can even make a case that the first murder here is, kind of, a relative of the two impossible slayings in The Unicorn Murders (1935), which looked like the work of the legendary (invisible) unicorn – except that Rhode offered a different explanation. And the overall story was, as to be expected, more down to earth.

The story begins with Constable Linton of the Abberminster Police going around to the home of Dr. Thornborough, aptly named Epidaurus, to discuss a local nuisance, Alfie Prince, but the doctor is not home and the constable is asked to wait for him in the consulting-room. And there he hears how another unexpected visitor arrives at the home.

Robert Fransham is Mrs. Thornborough's uncle and claims to have received an invitation to come down, from London, to discuss a private matter, but the Dr. Thornborough never wrote such a letter and now Fransham failed to emerge from the cloakroom – where he was washing his hands. So the constable has to batter down the locked door and inside they find the body of Fransham stretched on the floor with an inexplicable wound in his forehead. The cloakroom had been locked on the inside and the only window had a small, open panel of frosted glass, which looked out on upon the carriage-way and the outside of this window was protected by stout iron bars. Framsham's chauffeur, Coates, was in full view of the carriage-way and swears nobody had entered the carriage-way at the time of the murder.

Superintendent Yateley favors Dr. Thornborough as the murderer, but he has no way of proving it. The cloakroom had been locked on the inside and no murder weapon had been found there, which makes the use of a projectile unlikely. So he calls upon Scotland Yard to figure out how the murder was committed and Superintendent Hanslet assigns young Inspector Jimmy Waghorn to the case. Waghorn represents here, somewhat, of a weak link in the overall plot. 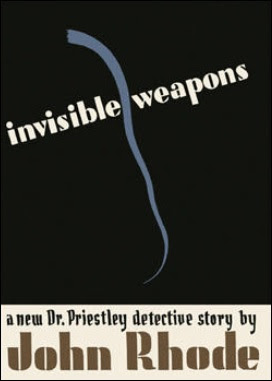 Steve, the Puzzle Doctor, of In Search of the Classic Mystery Novel, was one of the first to review this new edition and observed that Waghorn's fluctuating intelligence is on full display here. I agree.

Waghorn showed competence when questioning people, gathering information and even making an important discovery in the wall that faced the window of the cloakroom, but was unable to put two and two together to work out the murder method – a nifty, innovative new take on an old trick. A seasoned armchair detective will have no problem imagining how the locked room trick was worked when learning the shape of the wound in combination with the situation within that cloakroom. So why Waghorn didn't catch on is a little baffling.

Still, I had fun in the first part putting together, what turned out to be, a false solution largely based on Fransham personality, his (family) back-story and a worn greatcoat from the First World War. I began to warm to my own theory as it began to take shape, but, at the end of the first part, Waghorn admitted defeat and threw the towel in the ring.

The second part of the story concerns the death of Sir Godfrey Branstock, who was found dead in his own wine cellar during his birthday party, but the peculiar link here is that Sir Godfrey was the next door neighbor and landlord of Fransham! And we all know that can't be a coincidence.

At this point in the story, Dr. Lancelot Priestley, who made a brief appearance in the first half of the book, becomes more active and helps Waghorn and Hanslet with figuring out how both murders were pulled off. Priestley gives an after-dinner demonstration how the murder weapon in Fransham case could have a vanished from a locked room using a calf's head and his explanation for the murder of Sir Godfrey shows why Rhode was the genre's engineer of crime.

On a whole, the logical explanation fitted together very nicely. Not just how the murders were committed, but also the identity of the culprit and how the crimes were linked together, which turned out to have a (somewhat) original motive for the murder of Fransham – giving his death a shade of tragedy. I also liked the matter-of-fact ending in which Rhode stated that the murderer was committed to trial, found guilty by a jury and "condemned to death." I wonder if the murderer was hanged by Albert Pierrepoint. Anyway...

You can place question marks behind the feasibility of the murder methods, but the ingenuity of the plots is one of the hallmarks of Rhode's detective-fiction and is what makes them so fun to read. Bush and Crofts were craftsmen who constructed and destroyed cast-iron alibis. John Dickson Carr found out ways to accomplish the seemingly impossible and Rhode was a technically-minded writer who used the marvels of modern science and mechanics to shed people of their mortal coil. Invisible Weapons is a good example of his technical prowess and ingenuity. Highly recommended to everyone who loves pure, plot-oriented detective stories.

I hope HarperCollins, or any publisher out there, continues to reissue his work, because there many titles within his immense body of work that need to be reprinted as soon as possible. Personally, I would like to see Death at Low-Tide (1938), Murder, M.D. (1943), The Three-Corpse Trick (1944) and The Cat Jumps (1946) getting reprinted, which are part of the Desmond Merrion series. As for the Dr. Priestley novels, I would very much like to see Dead Men at the Folly (1932), The Corpse in the Car (1935), The Bloody Tower (1938), Vegetable Duck (1944) and Twice Dead (1960) appear back into print. So, if any publisher is reading this, you would do all of us a great service if you can get those reputed gems on our bookshelves. I believe Steve, the Puzzle Doctor, wants to talk with you about getting Brian Flynn reprinted.

So far my rambling review and I'll be returning to Bush for the next one.
Geplaatst door TomCat on 2/19/2018