Late last year, I reviewed Christopher Bush's The Case of the Amateur Actor (1955), a relatively late entry in the series, by which time Ludovic Travers had transmogrified from an amateur detective into a genteel private-investigator working for the Broad Street Detective Agency – even narrating his own cases like a proper gumshoe. Stylistically, it was a radical departure from the earlier, puzzle-oriented novels with their minutely timed, clockwork-like plots and seemingly indestructible alibis. A style that has been affectionately dubbed "Golden Age baroque." 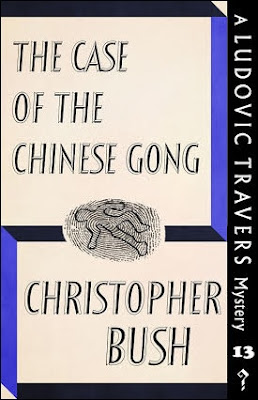 Regardless of this change, The Case of the Amateur Actor showed clearly Bush still knew how to construct an intricate plot during his later years and that makes me really look forward to their republication in the not-so-distant future. Anyway, I ended my review at the time with a promise to return to those early-period titles and had Dead Man Twice (1930) lined up for January of this year.

Evidently, that whole plan didn't exactly pan out and Dead Man Twice has since been returned to the big pile, because I recently got my hands on a number of titles I had been eagerly looking forward to.

Only a few days ago, Dean Street Press released the second set of reprints in Bush's Ludovic Travers series and this second batch has a couple of intriguing titles, such as The Case of the 100% Alibis (1934) and The Case of the Missing Minutes (1937), but the title that really aroused my curiosity was The Case of the Chinese Gong (1935) – an impossible crime novel that has invited reviewers in the past to draw comparisons with John Dickson Carr. So that got my full attention and the reason why I picked it first.

The Case of the Chinese Gong is the thirteenth entry in the series and, as said above, considered by many to be a Carrian impossible crime story, but the opening chapters initially reminded me of Cat's Paw (1931) by Roger Scarlett. A detective novel that's still freshly lodged in my memory.

Hubert Greeve is a thoroughly unpleasant, foul-tempered and tight-fisted man who made "a pretty big fortune" by liquidating a family business in Russia and investing the money in an engineering company at the beginning of the munitions wave of the First World War – which came at the expensive of his four nephews. Greeve's settled with a gentleman's agreement that all of his money would come to them upon his death and promised to lend a helping hand whenever he could. The nephews agreed at the time, because none of them was in direct need of money and promised to come by every year to celebrate his birthday, but "then the slump came."

Hugh Bypass is a schoolmaster and the oldest of the cousins, who had invested all he had in a private school, but there were not enough pupils to keep the place afloat. Martin Greeve was an engineer with his own toy-factory, but the Great Depression and a defaulting partner had completely ruined him. And he even tries to take his own life at the beginning of the story. Romney Greeve is an artist with a wife and two children, but ever since the slump he had been unable to sell any pictures. Finally, there's Tom Bypass, a retired army officer with bad lungs, who had a comfortable, yearly, income of five hundred pounds, but he had been using most of it to help his failing relatives and this came at a personal cost – least of all having to give up a high-class service flat in town. His doctor advised him to move to a country with a more agreeable climate or else he would not make it another year. Only problem is that Tom didn't have to money anymore to live abroad.

So they all turned to their uncle to make good on his promise and pay them what he owned them, but he turned them all down! And became as unpleasant as humanly possible. 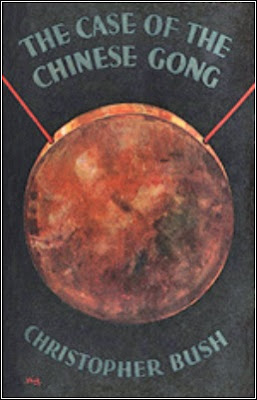 Hubert began "a deliberate policy of provocation" and tried to get the four to quarrel, or even fight, with him, which would have given him an excuse to disinherit them. His latest provocation, as the cousins learned from his lawyer, Charles Mantlin, was the drafting of a completely new will in favor of his long-lost sister, Ethel, who everyone assumed had died decades ago. Hubert even asked Hugh and Martin to witness "a very important document." Unsurprisingly, the cousins aren't particularly fond of their uncle, but, in this case, they appear to actually take steps to eliminate him from their lives!

Meanwhile, Hubert called in the local police on two separate occasions: one of them is to report an intruder in the garden, who left behind a measuring tape in the summer-house, which is followed by a threatening letter from his long-lost brother-in-law demanding that all the money goes to Ethel.

All of this culminates when the four cousins, alongside the lawyer, come to his country estate to celebrate his birthday.

On the second day, Hubert is playing a game of cribbage with Martin in the drawing-room, while Hugh, Tom and Mantlin are sitting, or watching, in the same room. Romney is working in the summer-house twenty feet away from the room. And, as the butler smote the dinner-gong, Hubert slipped from his chair to the ground with a bullet-wound in his right temple and nobody in the room saw the shooter – who appears to have performed "a first-class miracle."

The apparently inexplicable death of Hubert Greeve was very reminiscent of the second impossible shooting in Stacey Bishop's Death in the Dark (1930), in which a member of the family, surrounded by witnesses, is shot to death in the middle of the living room. And nobody saw the murderer. Interestingly, Bush smoothed over a flaw I had with that impossible shooting from Death in the Dark. I could see how the trick could possibly work, but doubted that nobody would have noticed, or heard, from whose direction the gunshot came. A problem Bush neatly solved by timing the fatal shot with the ringing of the dinner-gong.

Bush's explanation for the shooting also differed from Bishop. The latter had a more technical solution, while former employed stage trickery. This prompted genre historian, Curt Evans, to compare the impossibility to one in Carr's Seeing is Believing (1941), published as by "Carter Dickson," but with a better explanation. As matter of fact, the explanation is an unusual one and know of only one variation on this particular trick, which can be found in a short story that was written over half a century later. No. I'm not going to say which one, because that would give the whole plot away. Once you know how it was done, you'll immediately spot the killer and the rather nifty clue that only becomes obvious in hindsight. However, Travers soon learns that getting to that conclusion is easier said than done. 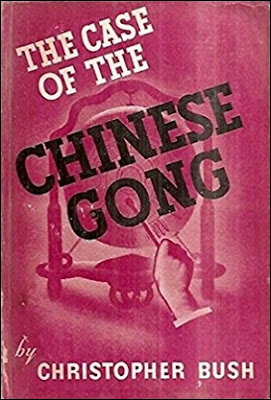 I imagine there are readers, even among us, who sneer at the idea that practically everyone, independent of each other, is in the process of murdering the old man and the question is really who got to him first. Travers even concludes that Hubert could have been struck by two bullets at the same time, which were fired by two murderers who were unaware what the other was doing!

I know this stretches credulity a little bit, but I think it's a nifty way to make sure nobody is above, or below, suspicion, because literately everyone could have done it. Even the butler, John Service, who was lost mobility in one hand and used the other the smote the gong. However, someone saw him pointing his bum-hand in the direction of the drawing-room. And Service and his wife also play a bigger than normal role, for servants, in the story. One of the many problems facing Travers.

Other puzzle-pieces Travers has to toy around with are two missing volumes of The Decline and Fall of Roman Empire and a small collection of fire-arm recovered from a drained pond in the garden, which turn out not to have been used in the shooting in the drawing-room. They also find a tree with a contraption nailed to it.

Three further things that have to be mentioned is that Superintendent George Wharton is absent from the story and his position is filled by the Chief Constable of the county, Major Tempest, who reportedly made his first appearance in The Case of the 100% Alibis. Secondly, Travers is writing a new book, Kensington Gore: Murder for High-Brows, which hopefully he'll get recognized as much for in the coming books as for his famous The Economics of a Spendthrift. A book that's referred to in all the books I have read to date. Lastly, one plot-thread remained unsolved by the end: who sent that threatening letter at the start of the story? We never get an explanation for that. I suppose the plot was so complex that Bush lost sight of that minor plot-thread.

So, all in all, The Case of the Chinese Gong is a delightfully complex and knotty detective story, which might stretch believability for some readers, but those who love these intricate, baroque-style puzzles will get their moneys worth when they crack open the pages of this long-neglected detective novel. A real shame Robert Adey overlooked this one, as well as The Perfect Murder Case (1929), when he compiled Locked Room Murders (1991). It makes you wonder how many more impossible crime novels there among those sixty-three mysteries Bush penned during his life-time.

Here's to the new age of discovery and I'll be returning to Bush for my next post!
Geplaatst door TomCat on 2/08/2018