Death Can't Be Locked Out

"Death doesn't always leave his signature behind to be read infallible like your people profess to be able to read finger marks."
- Dr. Prescott (Death Leaves No Card, 1944)

One of the most prolific mystery writers, from those prosperous early decennia's of the previous century, was without a shadow of a doubt John Street – who primarily enjoyed a reputation as one of the champions of the so-called humdrum detective story under his pennames John Rhode and Miles Burton. He has a reputation for being a tediously dull writer whose books are the miracle cure for long-suffering insomniacs, but the few books I read under the John Rhode byline were anything but unimaginative, sleep inducing run-of-the-mill detective stories. The House on Tollard Ridge (1929) and Men Die at Cyprus Lodge (1943) were perhaps a bit dry in parts, but not tedious or dull – and it was actually interesting to see someone handle the haunted house setting in a sober and rational manner. 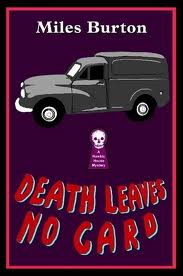 Unfortunately, the same can't be said about Death Leaves No Card (1944), published under the Miles Burton name, which has a solid enough plot and the locked room angle has its points of interests, but the uninspired story telling made this a real chore to plough through.
The story opens at the residence of Geoffrey Maplewood where one of his servants, Reuben Dukes, makes an attempt at breaking down a solid wooden bathroom door that separates them from Basil Maplewood – Geoffrey's entitled nephew who failed to resurface from his morning bath and has been unresponsive ever since. After the door finally yields, they extricated his stark naked body from the room, however, the only marks on his body coincide with the way he fell – and the cause of death is a complete mystery. A shock seems the most likely answer, but there were no electric appliances in the locked bathroom and it's one of the last households in neighborhood that isn't connected to the grid.
John Street was the mechanical engineer of the detective story, who was particular inventive when it came to constructing deadly contraptions, and the solution to the locked room is a fine example of that talent, but not one that will give the reader much trouble in figuring out how it was done. The question of the murderers identity and motivation suffer from the same transparency. However, it's not that the construction of the plot has any serious faults, but that it resembles the skeleton frame of a building before construction is completed. It's interesting from a technical point of view, but not very habitable and that pretty much sums up this book for me.
This impression of incompleteness was further strengthened by the nonappearance of Desmond Merrion, created for the Miles Burton penname, who simply dispatched a telegram informing Inspector Arnold that he is indisposed by the flu and that he won't be joining the investigation – which is the equivalent of Inspector Cramer tackling a murder case all by himself because Wolfe and Archie aren't around Inspector Japp tracking down the ABC murderer on his own because Hercule Poirot has indigestion.
Plot wise, this book is still a fairly competent entry into the locked room sub-genre, but the ho-hum storytelling also makes it a decidedly unexciting one – and not a book that you'll likely finish in one sitting. I guess I should've gone with one of the John Rhode titles instead, which has been a source of considerable embarrassment to me for the better part of a year. A while ago, I accumulated several, hard-to-get, titles from the Dr. Priestley series whose pleas to be read have been falling on deaf ears ever since acquiring them. But rest assured, shame hangs like a noose on my conscience.
Well, this was a rather short and negative review, especially after such a long and exuberant book critique posted earlier today, but I finally wrapped up this story and had to put this out while I was still semi-conscience of the solution – because this, for me, is a very forgettable story. So check out the review of The Last Chance, if you haven't done so already!