A Quiet Way to Go

"Even after the actual locked room ceases to be a mystery, the locked room of the mind remains an enigma."
- Kyosuke Kamizu (The Tattoo Murder Case, 1948)

Herbert Resnicow is one of the neo-orthodox GAD writers who captured my full attention with his ebullient debut novel, The Gold Solution (1983), in which the colossal union of Alexander and Norma Gold have a go at busting open the sealed door of a locked room mystery – and they did it with the same élan as the wisecracking, mystery solving couples who came before them. The plot wasn't exactly a pièce de résistance and the mechanics explaining the illusion of the locked room were workmanlike rather than inspired, but it entailed more than enough promise to pick up another one of his books. 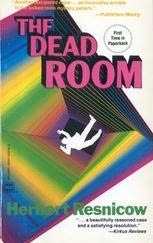 The Dead Room (1987) was published only a few years after his first venture in the genre, but evinces that had grown and matured, as a mystery writers, in the intermediating years. The story telling is more to the point and the plotting a lot tighter. And I can't help but wonder if the introduction of a new set of series detectives, the entrepreneur Ed Baer and his philosopher son, Warren, donning a pair of deerstalkers after an seemingly impossible murder threatens one of Baer's investments, had anything to do with that. The comparison between Ed and Warren Baer and Ellery and Richard Queen is easily made, however, it's only a superficial resemblance as both duo's are father and son, but they're altogether different characters and their relationship goes a lot deeper in this one book than we've seen from the other father-and-son team in an entire series – not to mention that both Ed and Warren are equals as they both solve one half of the puzzle. Ed Baer tries to find a way to enter and leave a room unseen, while his son philosophizes about the whom and why.
The problems begin when Walter Kassel, a seventy-year-old inventor of an innovative new sound speaker, is knifed in a darkened, anechoic chamber – an echoless room for testing and acoustic experimentation known as the dead room and it's impossible for anyone else to have entered the room undetected. The spot where the body was found, on a soft roped netted floor, suspended halfway up the room, near a concrete rig to mount a test-speaker on, makes the murder appear even more impossible than it already was.
Faced with an apparent unsolvable murder, a baffled homicide squad seals-off the crime-scene indefinitely with the profitable speaker still hanging from its rig and the only way for the company and investors to retrieve it, before they start losing money quick, is if the murderer starts producing sound that amounts to a confession – and Ed and Warren Baer are more than willing to help pry loose an audible admission of guilt. They do an admirable job, for two rank amateurs, at sifting through the evidence, interrogating witnesses and pinpointing whom of the six executives of Hamilcar HI-FI, with enough motives between them to have wiped him out a dozen times over, silenced the hated inventor – whose obsessive suspiciousness, secrecy and stalling had become more than just a nuisance to them.
But the story also takes a look at the relationship between father and son, which needed a bit of maintenance and has a few touching moments, without intruding on the plot, and that's when I realized I had found a companion for William DeAndrea and Bill Pronzini in Herbert Resnicow. Just like them, he exhibited an explicit understanding that he was writing detective stories and not potential Pulitzer prize winning novels that explore the ruins of Ed Baer's love life, after the passing of his wife, or which substances Warren used to dull the pain. They aren't two-dimensional, cardboard cutouts, but they aren't overbearing caricatures, resembling a psychiatrists file cabinet with legs, arms and a head, either.
The praise plastered across the front cover of the book boosts that the story is an original wrinkle in the impossible crime genre and I have to agree. Not only is the enclosed situation of the murder innovative, but the solution is custom-made to the circumstances and environment in which the murder was committed – comparable to Alan Green's What a Body! (1949), which also sports an impossible murder with a tailor-made solution that's unique to the events in the book. It's no mean feat to conceive a one-of-a-kind locked room mystery! But the entire book is a pleasure to read and has a very rich plot hinging on an ingenious rigmarole involving a lot of legal mumbo-jumbo.
In summary, this book has a near perfect balance between plot and characterization, and the look behind the scene of an institution, in this case a technology company, is one of those extras I extremely enjoy in these American detective stories from The Van Dine-Queen School of Detection. Recommended without reservation!
There will almost certainly be more reviews of Herbert Resnicow's books popping up here in the comings months. The proprietor of Pretty Sinister Books directed my attention to several of his locked room stories and I will definitely pick-up a few of them when I order my next batch of mystery novels. And then the agonizing waiting begins before they're delivered to my doorstep.
The life of a mystery addict is filled with tribulations and pain.
Geplaatst door TomCat on 7/09/2011