"Sometimes we go for a whole week without finding one single corpse."
- Gypsy Rose Lee (Mother Finds a Body, 1942)

The paternity of Gypsy Rose Lee's two detective stories, The G-String Murders (1941) and Mother Finds a Body (1942), has been speculated on from the moment the first copy rolled off the presses, and popular opinion at the time ascribed them to mystery novelist Craig Rice - who later fanned the fires of supposition by ghosting Crime on My Hands (1944) for actor George Sanders. This fallacy was considered to be a fact until recently evidence emerged that definitively proved Lee's authorship and the controversy was finally laid to rest. 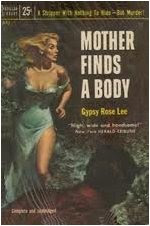 But having read Mother Finds a Body, I can understand why readers so easily gobbled up the surmise of Craig Rice's supposed role as Gypsy Rose Lee's ghostwriter. The plot is simply covered with what appears to be her paw prints. There is, first of all, a whiff of surrealism that lingers throughout the plot and the zaniness is vintage Ricean, but even more deceptive was perhaps the unity between Gypsy Rose Lee, her newly acquired comic-spouse Biff Branigan and her busybody mother Evangie. Rice's detective are with a single exception team players: John Malone, Jake and Helene Justus; Bingo Riggs and Handsome Kusak and the three kids who take center stage in Home Sweet Homicide (1944). So if Rice didn't indite this book than, at least, it can be assumed that Lee modeled her story on Rice's style and plotting technique.
Mother Finds a Body hits the ground running as Gypsy's mother, who was allowed to accompany them on their honeymoon, since she was unable to attend the wedding ceremony, finds the rapidly decomposing remains of a man in the bathtub of their trailer – whom they picked up at an earlier stage to act as their best man and ended up as a part of a tagalong party. The audacious and unconventional advice from mother is to bury the stiff and wipe the memory of him from their minds. There is, after all, no need for her daughter to expose herself to a police enquiry and negative publicity now that she's finally ascending the career ladder in the movie industry, but Gypsy and Biff insist on dropping-off the stinker at the next police station. Well, mom has her own plans and knows what's best for her daughter and son-in-law and does what every mother in her situation would've done: start a small-scale forest fire and dump the body in a shallow grave during the ensuing chaos.
Gypsy's mother is an endearing and memorable character who deserves top billing in this story just for being a world-class mom. It would've been very easy to slip up and mother an obnoxious personage, but here it was just done right and I think this passage says it all:

"Mother loves writing letters. She loves it almost as much as steaming open letters other people have written. Unfortunately, Mother's letters are what people call "poison pen." Mother doesn't call them that, of course. She thinks of her letter writing as a sacred duty. Too often I’ve heard her say, 'Someone should drop that woman a line and tell her just how she is – copying your song like that. It's my duty as your mother to do it. I will do it.' Then Mother would get that too-innocent look in her eye and she would say, 'Of course I won’t sign it. I’ll send it miscellaneously.'"

Unluckily, for her, the scheme she contrives to rid themselves of an odoriferous corpse misfires horribly, and the bodies slowly, but surely, begin to pile up at the border town where the trailing assemblage strands in a murder investigation – and the honeymooners have to figure out if the murderer is a member of their tagalong party, which includes two strippers and a hack comic, or one of the locals like the shady saloon owner.
Gypsy Rose Lee did a bang-up job at constructing a playful and clever enough detective story, inhabited with an odd assortment of slightly eccentric characters, with one or two interesting plot ideas revolving around the problem of dope peddling. Not every outsider, who visited the mystery genre, delivered as fully on the promise of writing a detective story as Lee has done here, and it replenishes my hope that her first novel, The G-String Murders, is not the insipid, disconnected mess of a story as some reviews suggested.

Briefly put, this bright, humorously and fetchingly written story was exactly what I needed as a remedy after working my way through the automaton-like melodrama of Wynne's The Green Knife (1932) and the turgid prose of Markham's Death in the Dusk (1928).
Recommended without reservation, especially if you want to read something that could've been penned by Craig Rice. This is probably as close as you'll get to match the original.
As a bonus, here's an interesting video of Gypsy Rose Lee as a mystery guest on the 1950s game show, What's My Line? (they also have some really great episodes with Vincent Prince and Peter Lorre as mystery guests):
Geplaatst door TomCat on 7/24/2011