Don't Look a Gift Corpse in the Mouth

"You give me nothing during your life, but you promise to provide for me at your death. If you are not a fool, you know what I wish for!"
- Marcus Valerius Martial

This is the first entry that is entirely dedicated to one of Rex Stout's novels, but ever since the inauguration of this blog I have occasionally peppered reviews with references to Nero Wolfe and Archie Goodwin – who are the protagonists of one of only two detective series in which I favor the characters over the plot. It's not that Rex Stout didn't know how to plot, it's just that his forte was dialogue and he mastered this aspect of his writing so well that it brought forth a set of characters as enduring and memorable as Sherlock Holmes and Dr. Watson. Admittedly, this turned the series over time into stories about two detectives rather than actual detective stories. 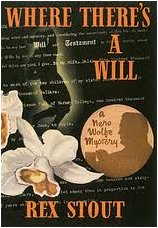 Where There's a Will (1940) is often maligned as the worst volume in the Wolfe corpus, but plot-wise it's just as bad as some of the later entries – except for the fact that this story followed in the wake of a slew of very good stories. Too Many Cooks (1938) and Some Buried Caesar (1938) are admitted masterpieces and Over My Dead Body (1940) deserves its fair share of praise as well. The status of the book wasn't exactly elevated, either, with such follow-ups as Black Orchids (1942) and Note Quite Dead Enough (1944; a personal favorite of mine). This is merely a mediocre fare from a vintage period and therefore egged as the worst course in the corpus, but I have a slight problem with that general accepted consensus as this story, at least, showed fragments of creativity – which is not something that can be said in favor of the forgettable The Father Hunt (1968) or the unimaginative Please, Pass the Guilt (1973).
The millionaire Noel Hawthorne, who was killed during a tragic hunting accident, is the author of one of the most unconventional wills ever drawn up by an attorney, in which he bequeathed his three sisters, named April, May and June, respectively a peach, an apple and a pear and his widow a measly five hundred thousand grand – while the residue of his estate, estimated at a whopping seven million dollars, is bestowed upon his mistress. Needless to say, the family is not amused and they want to engage the services of Nero Wolfe and Archie Goodwin to convince this woman to relinquish a considerable part of her inheritance back to the Hawthorne family.
The hefty, chair-bound gumshoe thoroughly despises quarrels over a dead man's earthly possessions, but is strapped for cash and has to accept the job to rejuvenate the bank account. But he's soon back on familiar turf, when Inspector Cramer and DA Skinner burst into his office with the announcement that the routine inquiry into Noel Hawthorne's accidental demise yielded new evidence and has now officially turned into a homicide investigation.
I know this summary synopsis will probably solicit a response along the lines of "how could anyone mess up such an intriguing premise," but if you're familiar with Rex Stout's weaknesses as a plotter you know that sparse, uninspired clueing and a more or less random solution ruined better detective stories than this one – and evinces that these tales are best read without your thinking cap on. I constructed a clever, but simplistic, solution around the basic facts that half of Hawthorne's face was blown away by a shotgun blast – which bore a striking resemblance to an archery accident in which a rogue arrow horribly mutilated his wife's face.
But, as I said at the beginning of this review, I don't read these books in the hope of finding an ingeniously, multi-layered constructed plot or a rug-puller of a surprise solution. If I want plot complexity, I'll pick up a novel by John Dickson Carr or Ellery Queen. No, I read these books, and many with me, because I feel at home in that comfy brownstone on West 35th Street – where you can't help but smirk at the bickering emanating from the office and goggle at the kingly meals that are prepared and served by their live-in gourmet-chef. We read them because we enjoy the company of the curmudgeonly, but often misunderstood, Nero Wolfe, the wisecracking Archie Goodwin (whose narrative voice makes up for nearly every flaw you can uncover in the plots), their gourmet-chef and head of the household, Fritz Brenner, the consistently fuming Inspector Cramer, the regular troupe of private ops, Saul Penzer, Orrie Cather and Fred Durkin, who are hired as legmen to assist Archie in his investigations, the lovely Lily Rowan and all the other regulars who inhabit this vibrant universe brought to life by Stout's sparkling dialogue.
I'm aware this constitutes as a roughshod, unprovoked onrush on the gag reflexes of some of you, but I have to say that these stories are best described as cozies with an attitude, and I, for one, can't get enough of them.
Overall, this is a nice compilation of Stout's strength and weaknesses, in which the familiar scenes of Archie mercilessly needling Wolfe with his sarcastic, teasing remarks are more interesting and fun than the actual plot itself – but devoted fans won't mind for the reasons stated above. If you're new to the series, however, skip this one until you've familiarized yourself with the characters in such books as Too Many Cooks (1938), Some Buried Caesar (1938), Not Quite Dead Enough (1944), And Be a Villain (1948), The Golden Spiders (1953) and Champagne for One (1958).
Geplaatst door TomCat on 7/28/2011