"Never hate your enemies, it affects your judgement"

"You're new at lawbreaking, I gather, so maybe I should tell you how the game is played. It's actually a combination of musical chairs and blind man's buff."
- Friedman (Twospot, 1978)

Bill Pronzini has a well established reputation for experimenting with innovative ways in which he, as a writer with an aversion to the idea of becoming a series scribbler who continuously regurgitates the same books over and over again, could approach the private eye story and developed a penchant for concocting hybrid-like stories – in which he roams the boundaries of the genre. Hoodwink (1981), for example, is a classic locked room mystery, which pays homage to the ghost of John Dickson Carr, while Shackles (1988) is an exceedingly dark, character-driven thriller exploring the darkest nooks and niches in the psyche of his nameless investigator. 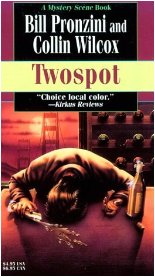 The collaborative team effort by Bill Pronzini and Collin Wilcox, Twospot (1978), in which their series characters, The Nameless Detective and Lt. Frank Hastings, cooperate with one another on the same murder case, lets itself not as easily asserted as the aforementioned books. In the first place, it's a crossover, which is a sub-category of fiction all by itself, but also a convergence of two distinct branches of crime fiction in which both authors specialized themselves – consequently intertwining the private eye novel with a police procedural.

Twospot comprises of four alternating, novella-length chapters and a epilogue that shifts perspectives from nameless to the police lieutenant, in which they deal with the problems facing them on their own terms – making the book an interesting contrast between the writing styles of Pronzini and Wilcox.

Pronzini kicks off the story by sending his lone wolf op down to the winery of the Cappellani family to report on a background check he run on one of their employees – suspected by one of the sons, Alex Cappellani, to be an opportunistic gold digger who wants to usurp the distinguished distillery by trapping his widowed mother into a marriage. At this early stage in the story, I fully expected him to chance upon the body of one of the men at the winery and the plot turning into an old fashioned, but hardboiled, whodunit with a family business as a backdrop – but the crimes confronting him were limited to merely an attempted murder and a forced, midnight wrestling match in the shrubberies. He's had worse days.

The chapters, narrated by Nameless, are unmistakably Pronzini's – tough and hard-headed when the situation calls for it, but humane when he needs to be and this early incarnation of his personage, that of the solitudinarian investigator, shows how consistent his basic personality has been over the past four decades. Fundamentally, he has remained the same person, however, you only have to glance at the stories that came after this one to see how life continued building on that fundament – turning an einzelgänger into a family guy with a senior partnership in a successful private investigation firm. And his endearing fanboyism concerning his favorite pulp writers also makes him one of the most relatable characters in the genre, because you can connect with him on a basic level as one fan to another and his thoughts on the subject can be eerily recognizable. Heck, he even described a dream, in which he and a bunch of detectives, from the brittle pages of his treasured pulp magazines, joined forces to clean up a gang of Prohibition era rum-runners. Hey! I had dreams like that!

But let us return to the story, as Wilcox has taken over from Pronzini when the subject of Nameless' enquiry turned up dead and a note with an incomprehensible term, "twospot," scrawled across its surface is found near the body – and here the plot takes a definitive turn away from a possible crossbreed between the private eye and a conventional detective story and morphs into a police thriller. Honesty compels me to say that I was less then thrilled with Wilcox's contribution to the book. The narrative voice of his protagonist, Lt. Frank Hastings, also has a hardboiled edge to it, but, somehow, it didn't ring true with me and impressed me as artificial – nor did I find his character particular enthralling. As a matter of fact, I think his subordinate, Canelli, who acts like a walking good-luck-charm to his team and made a significant contribution to resolving the case and preventing more bloodshed, eclipsed his overall appearance.

Needless to say, a modern police thriller will not entirely adhere to the orthodox rules of fair-play, nonetheless, there were still parts of the solution that were foreshadowed and could be anticipated – but don't expect to find clues that will help you fill in the finer details (e.g. the exact meaning of "twospot"). However, the problem the solution suffers from the most is that parts of it are a bit dated and haven't aged with same grace as a Cappellani vintage wine, but I can't say any more without spilling too much crucial information regarding the solution.

In conclusion, this is not a prime candidate for a future short-list of favorite entries in this long-running series, which is mainly due to the chapters penned by Collin Wilcox, who simply failed to grab and hold my attention, and the plot was also sub-par. I've seen Pronzini do better than this, even in an out-and-out thriller like Shackles! Still, it's an interesting experiment that has its moments and perhaps I should've read a Lt. Frank Hastings novel before tackling this book (to get the overall and complete experience), which is a lesson I will take to heart before I start chippen away at the crossover novel, Double (1984) – co-written with his mystery writing wife, Marcia Muller. I'm sure there are one or two of her books I can easily obtain, even in these parts. To be continued.

By the way, why does even a somewhat disappointing book usually translate itself into a shoddily written review – even after a number of revisions this is the best I have to offer. I really do suck! Oh well, the next blog post will hopefully be a bit better as I run through the plot of a locked room mystery by an obscure, nearly forgotten mystery writer.

Update: I received additional information on this book from Bill Pronzini:

"It's a fair review. Twospot was written a long, long ago and I've never much liked it myself. It was supposed to be Threespot -- a three-way collaboration with the third writer being Joe Gores. Gores backed out just as we were about ready to start plotting and writing the book, so Collin Wilcox and I had to rethink and rework it. Neither of us was satisfied with the finished book. The original Threespot story would have made for a much more effective novel."

It's a pity that the triple crossover never came to fruition and killed what could've been an excellent, and unique, crime book within the genre.
All the books I have reviewed in this series: