"It all came together then, you see — all the various isolated bits — and made a coherent pattern."
- Miss Jane Marple (Agatha Christie's A Murder is Announced, 1950)

The Perfect Murder Case (1929) is the second book in Christopher Bush's voluminous Ludovic Travers series and offers, what initially appears to be, a sensational, thriller-like plot about a murder that was announced in advanced, but the book swiftly turns into a Croftsian detective story – dealing with a quartet of alibis that had "passed as bombproof." And there as many different detectives working on the case to test these alibis. 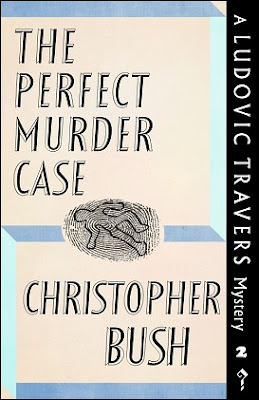 The opening chapter, titled "By Way of Prologue," presents the reader with a short series of vignettes that appear to have no bearing, whatsoever, on the subsequent story. However, these apparently disconnected scenes are actually moments of key importance and they even contain some well-hidden hints regarding the solution to one of the unbreakable alibi. So keep your eyes peeled when reading these scenes.

What happens in the following chapter can be read as a challenge to both the reader and the detective-characters populating the book.

On the 7th of October, the Daily Record receives a letter, signed by "Marius," in which he announces his intention "to commit a murder," because his prospected victim left "no other way out" of a particular situation – even sharing the date and a rough location of the murder. Marius writes that his victim-to-be is scheduled to die on the night of the 11th and the scene of the crime will be somewhere north of the Thames in London. The letter concludes with a promise that "fuller particulars" will be shared with the press and police before the event takes place.

These letters brazenly announcing the intention to commit coldblooded murder anticipate similar, challenging, letters from Agatha Christie's celebrated The A.B.C. Murders (1936), which might have been inspired by this novel. Only difference is that the pseudonymous "Marius" does not mock the detectives and actually has regard for the innocent ("women and children particularly need not be frightened").

Nevertheless, the general public is morbidly curious and heavily speculates about the person who wrote the letters, which range from a simple hoax and a madman to the possibility that the writer is a sportsman who gave the law a "sporting chance" in order to ease "the pangs of conscience." And while the public is engaged in heavy speculation, the newspapers identified the brand of typewriter that was used and the police were circling the pillar-boxes the letters had been put in.

I liked the built up to the murder and believe this aspect of the story should've been expanded upon a little more, because the ambiance of a cold, drizzly London (eagerly) anticipating a murderer to strike one of them down was very well done. It would have been nice if that part of the story had been given an additional chapter. 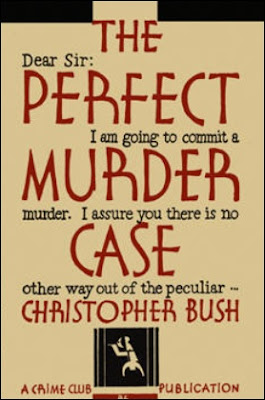 In any case, in spite of every possible precaution that could be taken, given the circumstances, the police failed to prevent the murder from happening or catch the murderer in the act.

The victim is a disagreeable person, named Thomas Richleigh, who is murdered in the privacy of his own home, behind the locked door of his dining-room, where he's found sprawled in an easy chair with a bloodstain on his waistcoat – a knife-handle protruded from the center of the stain. I suppose I should, briefly, talk about the problem posed by the locked dining-room.

At the outset, the murderer appeared to have used a key to the door in order to enter, and leave, the dining-room and simply locked the body inside, but this turned out not to be the case. Ludovic Travers demonstrates, towards the end of the first half, the very simplistic, two-part trick employed by the killer to escape from the locked dining-room, which followed the pattern of other (famous) locked room novels from this period – e.g. Anthony Berkeley's The Layton Court Mystery (1925) and S.S. van Dine's The Canary Murder Case (1927). So, technically, the murder qualifies as an impossible crime, but a very minor one and should not be the primary reason for reading the book.

Incidentally, providing an explanation for this locked room problem also happens to be the most noticeable contribution Travers makes to the case, because he only plays a secondary role in the story.

Travers is in at the death, however, he "retired discreetly to a corner" and, like a chameleon, watches the police do their work from the sidelines. He even exclaims to the Chief Constable "you don't suspect me of being one of those amateur people who come along and settle everything." So the majority of the detective work comes down to Superintendent Wharton and the battalion of policemen working under him, but the lead detective-character is John Franklin, late of Scotland Yard, who is now working as an inquiry agent for the investigative branch of Durangos Limited – a firm of "expert consulting and publicity agents for the world in general." Travers is attached to the same firm and sometimes drops back into the story to give some sound advice to Franklin.

The work done between Superintendent Wharton and Franklin consists of picking apart the alibis of the four primary suspects, Charles, Ernest, Frank and Harold, who are brothers and the nephews of the murdered man. All four of them have a financial incentive to wish the unwanted comforts of a silk-lined coffin on their uncle, because Richleigh intended to marry his vulgar housekeeper. Something that would have seriously cut into their inheritance. Only problem is that all four of them possess an unshakable alibi and their investigation into these alibis takes both detectives as far as a remote corner of France. And this trip abroad, to investigate an alibi and multiple different detectives, really drove home the comparison to the detective-fiction by Freeman Wills Crofts (c.f. The Cask, 1920). 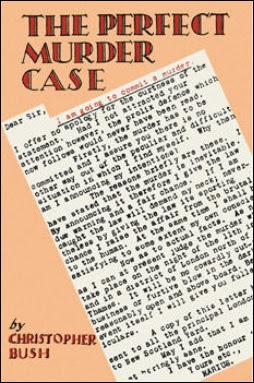 Interestingly, The Perfect Murder Case has, plot-wise, something in common with the previous title I read in this series, Cut Throat (1932), namely that the murderer's identity becomes apparent after the halfway mark, but the problem remaining for the detectives is this character's unimpeachable alibi – which has to be demolished if they want to get their man. I think the tracking of suspects and gathering of evidence, in order to demolish this alibi, makes for an engrossing read. Particularly when part of the problem is this specific alibi "grows stronger every day."

My sole complaint about The Perfect Murder Case, if you can call it a complaint, is that the alibi-trick is rather workman-like compared to the absolutely brilliant, inspired and original time-manipulation trick from Cut Throat. Admittedly, that comparison is far from fair and only make it because the other book is still very fresh in my mind. And had hoped to find a similar time-manipulation alibi here. On the other hand, The Perfect Murder Case is far more consistent as a detective novel than Cut Throat, which was made up of two separate, but closely intertwined, stories. As a result, the second half of Cut Throat completely outshone the first half, but The Perfect Murder Case was an excellent and a far more consistent read from start to finish.

So, yes, this was a great read and really appreciate this opportunity, given by Dean Street Press and Curt Evans, to explore this long-neglected series of Golden Age mysteries. You can expect me to return to this series before too long, but I will probably squeeze in a volume by Case Closed before taking a third look at Bush. So keep slamming into that refresh button until then.
Geplaatst door TomCat on 9/21/2017