"You mean, you want me to play detective?"
- Miss Hildegarde Withers (Stuart Palmer's Murder on the Blackboard, 1932)

John Russell Fearn was a prolific British author and a regular contributor to the American pulps, including such illustrious magazines as Amazing Stories and Astounding Stories, which were dedicated to speculative fiction on the science-fiction spectrum, but he also penned a whole slew of crime-fiction under many different pennames – such as "Thornton Ayre," "Hugo Blayn" and "John Slate." The name of interest to this blog-post is the last one.

In late March of 2011, John Norris from Pretty Sinister Books published an interesting post on his blog, entitled "Neglected Detectives: Maria Black, MA," in which the work that was originally published under the name of "John Slate" is discussed. John concluded his post by remarking that "it is the unusual and imaginative ideas," such as the reportedly original murder method from Thy Arm Alone (1947), "that make the Maria Black books worth tracking down and reading." But what really piqued my interest was the apparent abundance of impossible material in this series. Nearly all of them were listed by the late Robert Adey in Locked Room Murders and Other Impossible Crimes (1991)! But first thing first! 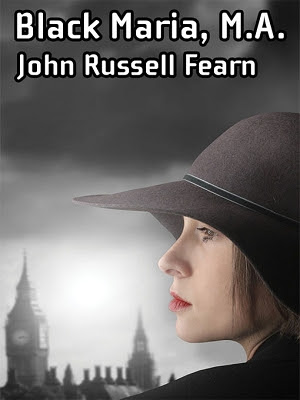 The leading character and inquisitive mind in this series is an English school mistress, Miss Maria Black, who teaches at a girl's college and Fearn said about her creation that she was conceived from "a childhood memory of a distant relative" with "the logical mind of an analyst" – which he molded until she emerged as a middle-aged headmistress with "a fund of knowledge" and "understanding of human nature."

She drew for this insight into human nature on her hobby and guilty pleasure: the study of criminology, crime-fiction and the movies. Miss Black refers to her well-stocked bookcase as "the skeleton in my educational cupboard" and barred the schoolgirls from one specific movie theatre in town, which she patronages herself and prefers to enjoy American gangster pictures unobserved. I should also note that the character and personality of Miss Black seems somewhat reminiscent of Stuart Palmer's crime-solving schoolteacher, Miss Hildegarde Withers.

Miss Black is even referred to by one of her own relatives as "a nosy old dragon," which sounded similar to the accusation often leveled at Miss Withers of being "a meddlesome old battle-ax." There are portions in her debut novel, Black Maria, M.A. (1944), that read as an imitation of Stuart Palmer. So let's finally take a look at one of her cases.

Black Maria, M.A. was Miss Maria Black's first recorded case and it is a personal one: her now late brother, Ralph Black, accumulated a small fortune by selling canned broccoli and founding a flock of chain stores – giving him no reason to shoot himself. But that's what apparently happened. One evening, he locked himself inside his private-library and shot himself.

The police treated Ralph's death as an open-and-shut case of suicide. However, his son, Richard, believes otherwise and communicated his suspicions to his aunt in England. Miss Black has already received an urgent summons from her brother's lawyer and she learns from him that her brother shared his son's opinion. A sealed envelope is given to her and contains a handwritten letter from her dead brother, in which he explains the possibility of him dying from a cause other than a natural one and he wants his sister to track down his potential murderer. He instructed his lawyer to hand over a thousand bucks to her, which is meant to cover the expenses of her investigation, but, in case of success, she can look forward to a huge reward – an inheritance of a whopping five-hundred thousand dollars!

One of her first leads involves a dangerous criminal, Hugo Ransome, a gangster whose "methods go right back to the rip-snorting 1920s Gangsterism" and generally considered to be one of the slimiest scoundrels in the city of New York. This plot-line also involved an escaped convict and one of the female members of the Black household. It is this strand of the plot that gave the book a distinctly Withersian touch, because I could easily imagine Miss Withers as Miss Black when using her thousand bucks to secure herself a bodyguard from the underworld. A tough, but honest, criminal, known as "Pulp" Martin, who seems to love the well paid jobs Miss Black has for him, which include staging a riot at a music-hall and pointing a gun at one of the suspects while Miss Black interrogated him.

All of these scenes, including the one at a joined simply called "ICE CREAM SODAS," could have easily come from the pens of Palmer or Craig Rice. On that account alone, I would recommend the book to fans of that pair of mystery writers, but to enthusiasts of Palmer's work in particular. Anyhow...

As Miss Black is busily "knitting together the threads" of "a web with numberless strands," she has to slowly come to the sad conclusion that her brother grossly abused his wealth and influence. Ralph Black wrecked a number of lives and some of those lives had lived very close to his own household, which, to some, made him "worthy of death." The explanation to the who and why is a clever variation on a well-known story by Agatha Christie, but the final twist obviously took its cue from a John Dickson Carr novel from the early 1940s.

Note that Fearn had named Carr as his favorite mystery writer and the whole premise of the locked library, as well as its explanation and surprise twist, struck me as a conscious attempt to imitate and improve upon the ideas set forth by Carr in that one novel – in which Fearn was not entirely unsuccessful. The locked room is clever enough, somewhat original and decently presented, but the problem with these kinds of tricks is that it's very hard to pull them of convincingly. However, it pulled off fairly well here. Hell, it was good enough for the French crime-fiction expert and locked room enthusiast, Roland Lacourbe, to include the book in 99 Chambres Closes (99 Closed Rooms, 1991).

I also have to mention that the story includes a plot summary for one of Richard Black's stage-plays, which gives an ingenious murder method for bumping off a crystal gazer. I suspect David Renwick borrowed this method for one of the plot-threads for his Jonathan Creek television-special The Judas Tree (2010).

So, all in all, Black Maria, M.A. proved to be a good, if second-tier, mystery novel and was pleasantly surprised to discover this was basically a clever piece of fan-fiction from a fellow JDC-fanboy. Definitely worth investigating further.

Finally, I previously reviewed The Lonely Astronomer (1954), which was an interesting blending of science-fiction and mystery elements, but, overall, not as clever as this one. And the detective-character was rather annoying.
Geplaatst door TomCat on 6/21/2016