John Rhode's Vegetable Duck (1944) is the fortieth title in his lengthy, long-running Dr. Lancelot Priestley series and has been praised by many readers as a particularly clever, crisply written detective story with an ingeniously contrived method for poisoning a piece of vegetable marrow – making it a veritable chef-d'oeuvre of the series. So imagine my disappointment when this supposedly five-star mystery turned out to be a pretty average, middle-of-the-Rhode entry in the series. 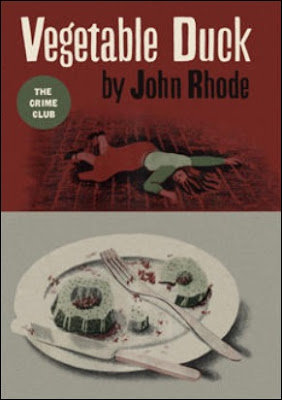 I've only read an infinitesimal fraction of the Dr. Priestley series, but Vegetable Duck is a second-tier title compared to The House on Tollard Ridge (1929), Death on the Board (1937), Invisible Weapons (1938), Men Die at Cyprus Lodge (1943) and Death in Harley Street (1946). However, my dissatisfaction has more to do with the excessive, undeserved praise than with the story's inability to live up to it. But it has negatively affected my reading.

So this is very likely going to be a short, poorly written and disappointing review, because I have not all that much to say about it. The reader has been warned.

Vegetable Duck begins with the return of Charles Fransham to his London service flat, Mundesley Mansions, who, earlier in the evening, had been lured away from his diner by a mysterious, unaccountable telephone call – leaving his wife to enjoy a dish of vegetable duck with potatoes, gravy and cheese. And in case you're wondering, vegetable duck is "a marrow, not too big, stuffed with minced meat and herbs" and "baked whole." A dish that was not only a personal favorite of Letitia Fransham, but also turned out to be her last meal. She's found in the dinning-room, unresponsive, when her husband returns. The doctor who examined the body suspects Mrs. Fransham had died from "the effects of a powerful dose of some vegetable alkaloid" and alerted the authorities.

Inspector Jimmy Waghorn, of Scotland Yard, is placed in charge of the case and initially focuses his attention on the husband as the primary suspect.

Charles Fransham tells Waghorn he had been called by a man, named Corpusty, who introduced himself as an employee of a private-detective he had hired and wanted to meet him immediately, because there had been developments in the case – only Corpusty never turned up. And when Fransham returned home, he found the body of his wife in the dinning-room. Yes, this is very reminiscent of the murder of Julia Wallace in 1931 and mentioned a number of times throughout the story. The Wallace Case had captivated the imagination of many mystery writers of the time and Dorothy L. Sayers even dedicated a chapter to the case in The Anatomy of Murder (1936).

Fransham had hired a private-detective because he has been receiving anonymous letters with shotguns drawings on them. An obvious reference to a fatal shooting incident that had killed his brother-in-law, but there are many people, such as the now retired Superintendent Hanslet, who are convinced Fransham had shot his brother-in-law. Simply made it look like an unfortunate hunting accident.

So there are more than enough potential leads to follow up on and then there's the genuinely clever method for introducing a lethal dose of digitalis into a piece of vegetable marrow. A problem clevery explained by Dr. Lancelot Priestley over the dinner-table and also solved the puzzling problem of damp, water-damaged envelope. Sadly, Dr. Priestley is only peripherally involved and acts more as a soundboard to Waghorn than as a armchair detective. Nonetheless, the poisoning method Dr. Priestley laid bare was as cunning and inventive as the unusual poisoning method from Gladys Mitchell's little-known The Man Who Grew Tomatoes (1959). But the poisoning of the vegetable marrow also happened to be the only aspect of the plot that lifted the story, ever so slightly, above average. Only very briefly.

Vegetable Duck has some good detective work with several interesting plot-threads, but, as a whole, the story has nothing to justify the inordinate amount of praise it has received over the decades, because the murderer really sticks out and can easily be pointed out the moment this character enters the story – becoming even harder to ignore when a second murder is committed. While the murderer's identity is obvious, you're not given sufficient clues to work out any of the (other) problems for yourself. So, even as a howdunit, you can hardly label it as a perfect, five-star mystery novel.

Admittedly, the book was not as poorly plotted as The Milk-Churn Murder (1935) or as dull a story as Death Leaves No Card (1940), but neither was it anywhere near as good or brilliant as any of the earlier mentioned titles. My unmet expectations killed any possible enjoyment I might otherwise have gotten out of it. Not entirely fair, I know, but I went into the story expecting a monument of the series. Evidently, this happened not to be the case.

Anyway, I have complained and rambled on long enough. Vegetable Duck didn't work out for me, but there's more where that book came from and will simply lift another John Rhode title from the big pile in the coming weeks or months. The Robthorne Mystery (1934), Mystery at Olympia (1935), Death at Breakfast (1936) and Nothing But the Truth (1947) all look very promising. So stay tuned.
Geplaatst door TomCat on 9/20/2018