"To every reasonable theory of the cause of his death they raised some technical objection."
- Inspector Arnold (Miles Burton's Death Leaves No Card, 1944)

Earlier this month, "Puzzle Doctor," who blogs over at In Search of the Classic Mystery Novel, announced he was embarking on a month-long Rhode-a-Thon, called #IReadRhode, which came shortly after my review of Death in the Tunnel (1936) and was swiftly followed by a blog-post about that book's immediate predecessor – namely the slightly disappointing The Milk-Churn Murder (1935).

Well, I had done my miles on the Rhode less traveled, but Death in the Tunnel and The Milk-Churn Murder both came from the Desmond Merrion series, published under the byline of "Miles Burton," and it had been a while since I read one of his Dr. Lancelot Priestley novels. So, I reasoned, why not use this convenient excuse of a Rhode-a-Thon to return to Rhode's work for a third time this month. The book I ended up with has been praised by the likes of Jacques Barzun for its clever, innovative and unique plot: Death in Harley Street (1946). 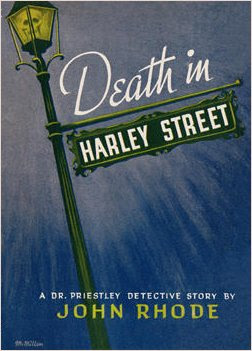 Death in Harley Street opens in the study of Dr. Lancelot Priestley, "an eminent if somewhat eccentric scientist" who "had adopted as his hobby the whole theory of criminal investigation," where a small clutch of his friends had assembled: a retired Superintendent Hanslet, Superintendent Waghorn and an elderly, successful general practitioner, Dr. Oldland – who found himself in a comfortable state of semi-retirement. It was not the first time they gathered in that study and it was tradition for Priestley to enthrone himself behind his desk, "apparently in a state of complete torpor," to listen to the problems of the police.

As the equal eminent Dr. Oldland remarks on this occasion, it's usually the pair of coppers "who take the floor and hardly let a chap get a word in edgeways," but on this particular evening he wants to hear Dr. Priestley's opinion on the strange death that befell one of his colleagues.

Dr. Richard Mawsley of Harley Street, "the leading authority on glandular diseases," was alone in his consulting-room when his butler, Phepson, heard a dull thud and the rattle of a door handle, which was followed by the faint, muffled sounds of movement from the adjoining dispensary. Suddenly, there was "a blood-curdling cry and a sickening crash." Dr. Mawsley was discovered on the floor of his dispensary, "writhing in agony," with the coat sleeve and cuff of his left forearm rolled up, which revealed a fresh puncture mark and near him lay the pieces of a broken hypodermic syringe – on the bench stood a phial, the rubber cap torn off, which bore a label identifying its content as strychnine.

Evidently, the gland specialist had been injected with a lethal dose of poison, but how this came about seems to be an unanswerable question.

Suicide appears to be out of the question: Dr. Mawsley was a reserved, self-centered man who loved to see his wealth accumulate and on the evening of his death he received incredible good news from a visiting lawyer. One of his first patients had remembered him in her will and he found himself the recipient of a generous, entirely unexpected legacy. A legacy to the tune of five thousand pounds. The lawyer, who was the doctor's last visitor, left him in the best of spirits, which is another strike against the possibility of suicide. Murder is equally improbable for a litany of reasons, but the most obvious ones are that there were no signs of a struggle or an opportunity for a nebulous murderer to enter (and leave) a room that was under constant observation. 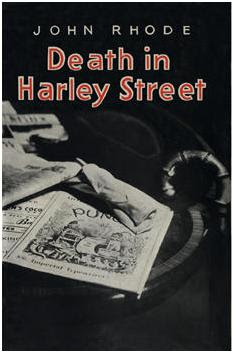 So everyone, including the courts, settled for the easiest possible explanation, namely accidental death, but, as Oldland remarked, for "a medical man of his experience" to "make such a mistake was extraordinary" – even though it appears to be the only answer that made remotely sense.

Well, Dr. Priestley agrees that the case is exceptional and states that the circumstances exclude accident, suicide or murder and "a fourth alternative should be sought," which got him permission to reopen the case with Jimmy Waghorn as his legman. First the thing you’ll notice from the subsequent investigation is that Rhode gave more than his usual consideration to characterization and in particular the personality of the dead doctor.

At his best, Dr. Mawsley was considered as a man of "all head and no heart." A man widely respected in the medical world as one of the best gland specialist of his time, but this respect never extended to the person behind the reputation. At his absolute worst, he was considered to be "an inveterate fee-snatcher" and he had no interest in seeing people whose primary source of income was a weekly pay envelope, which resulted in the unnecessary death of several people.

So combine this piece of well-done characterization, especially by Rhode's own standard, with the baffling premise, as well as its clever and original explanation, and you got a potential classic on your hands, but what keeps the book from attaining a place in the first ranks of the genre is the conversational-style of the plot – which gave the story the pace of a dying snail. I do not believe the pace should take anything away from the shimmering brilliance of the plot, but there's no getting away from the fact that Death in Harley Street is an incredible slow moving story and you should keep that in mind.

As you probably gathered from this padded review, the conversational approach Rhode took to the plot and writing makes it kind of hard to make any pointed observation. Not without giving something of importance away. I mean, I noticed one part of the solution, which did not involve the fourth alternative, strongly resembled the plot of an Agatha Christie novel, but naming that specific book would probably give away the identity of the murderer and motive to a perceptive reader.

But rest assured, the book is well worth the attention of fans of vintage mysteries and if you happen to be one of those readers, like yours truly, who loves to play armchair detective than you'll enjoy trying to figure out what the fourth alternative is. In that case, the slow pace of the book might even be a positive attribute, because it gives you the time needed to consider all of the evidence.

For my next read, I have selected a detective story with a plot that reportedly contributed a piece of military strategy for the Allied invasion of Nazi occupied Europe.
Geplaatst door TomCat on 5/24/2016