M.M. Kaye was a writer of children's stories, historical fiction and tales of romance who was born in Simla, India, to a military family and her grandfather, brother and husband all served the British Raj, but as the wife of an army officer she also lived in places such as Egypt, Kenya and post-World War II Germany – which she drew upon for a handful of standalone mysteries that appeared from 1953 to 1960. This places the series in the twilight years of the genre's Golden Era.

The books are collectively called "The Death In..." series and they are known for their foreign, often exotic and sun-drenched, backdrops. So I figured my introduction to this series would make for a nice follow-up to my previous review of Resorting to Murder: Holiday Mysteries (2015). 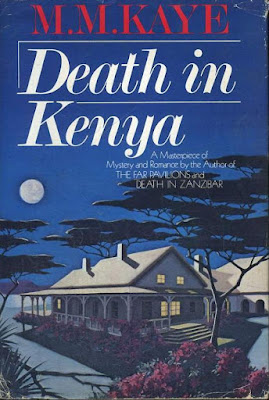 For this purpose, I picked the fourth one, Death in Kenya (1958), which was originally published as Later Than You Think, because the plot description intrigued me.

Death in Kenya is set during a period when the Mau Mau Revolt, which the settlers of the day referred to as "The Emergency," was slowly ebbing into the history books, but the land was still rife with whispers of "remnants of Mau Mau gangs hiding in the swamps" and rumors how they were being fed by African farmhands – who fulfilled, by daylight, the role of "faithful and trusted servants of the settlers." One of those places, hemmed in by dark, perfidious swamps, is a small farming estate, simply called Flamingo, tucked away in the lushness of the Rift Valley.

The first chapter is dedicated to painting vivid, brightly colored pictures of the lush, sun-soaked habitat of the book, which are echoed throughout the entirety of the story. These descriptive passages evoke a sweltering atmosphere and give the reader a genuine sense of time and place. Kaye has been compared to Agatha Christie for simply being a female mystery novelist, but her apparent preference for sultry locations and talent to bring them to life places her nearer to writers such as Elspeth Huxley, Juanita Sheridan and Arthur W. Upfield than to any of the English Crime Queens.

Anyhow, the opening of the book also covers several generations worth of family history, which went over how the "acres and acres of virgin land" were turned into farmland and how Flamingo went from "a crude mud and wattle hut" to "a small stone-built house" and eventually the heap of stones were replaced by "a huge, sprawling single-storeyed house" with "wide verandahs and spacious rooms" – all done under the guiding spirit of the family matriarch, Lady Emily DeBrett. Who's known as Em DeBrett of Flamingo.

Opening of Death in Kenya also introduces the reader to the cast of characters who live, or have lived, on that farm in the Rift Valley. A number people who have died are mentioned, such as Em’s husband and son, but the persons of interest are the ones who were still alive when the story opened, which first and foremost consist of her grandson, Eden, and his wife, Alice – who sees Kenya as "a savage and uncivilized land full of brooding menace" and would love nothing more than to return to England. There's Gilly Markham, the farm manager, whose wife, Lisa, is in love with Eden. Alice also has a not-so-secret admirer: the adolescent son of their next-door neighbors, Ken Brandon, who has an "unsnubbable infatuation" for her and has threatened to shoot himself over her. There's also Zacharia, an old, grey-headed Kikuyu, who has served Em for four decades and Drew Stratton, a neighboring settler, who has seen action in the scuffles between the settlers and natives. Finally, there's Victoria Caryll, Em’s niece and formerly engaged to Eden, but she's still on her way to Kenya when a series of bizarre incidents culminate in a gruesome murder.

It appeared as if an "invisible vandal had been taken to haunting the house," an entity referred to throughout the story as "the Poltergeist," who had toppled over a K'ang Hsi vase, spilled a bottle of red ink on the carpet and one of Em's favorite long-playing records had been smashed into a dozen pieces. They were malicious acts of vandalism, but still fairly innocuous compared to the discovery of the stiffened cadaver of the housedog, Simba, contorted from the deadly effects of poison, which they fear is only a prelude to the murder of one of them and someone is butchered in the garden of the home with a panga – which is described as "a heavy knife that the Africans used for chopping wood and cutting grass." 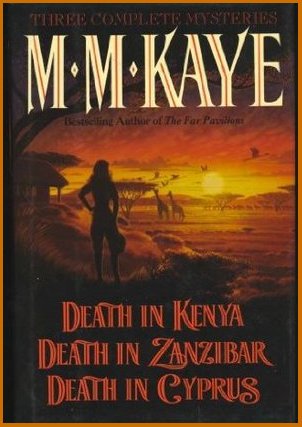 Aftermath of the killing is largely observed through the eyes of Victoria, who arrives there several days after the murder. She provides an outside perspective to the events that taken place there, but her presence also functions as a complicating factor to the people at Flamingo and one of these factors is her lingering feelings for Eden. As well as the reason why he suddenly broke off their engagement.

However, this subplot of strained romanticism is only a small part of the overall story. Kaye takes her time to elaborately sketch out the characters and paint evocative pictures of their surroundings, but the same skill and amount of time is taken to plot and the result is satisfying enough – employing such clues the previously mentioned instances of vandalism, a blood-stained cushion, a missing piece of garment, fragments of piano music and bits of Shakespeare. A second death by poisoning occurred during a picnic and the murderer attempted to disguise the murder as an attack by a puff adder, which involved a clever piece of misdirection that could have potentially destroyed vital evidence. And the destruction of the evidence would have been done by a completely innocent, well-meaning person! Of course, for the sake of the story, that was not allowed to happen, but it's a very cunning trick that actually does warrant a comparison with Christie. Anyhow, the trick could have been elaborated on and used as the foundation for a completely different story. It's actually a pity the trick was buried in the other (admittedly rich) material of this book.

Kaye liberally smears a coating of suspicion on her characters and my interest was maintained throughout the story, which a beautiful and fairly well-balance of plot, character, setting and showing life in the colonies before they completely crumbled – which was done with such skill and talent that I wanted to go out and colonize some foreign, sun-drenched lands (who's with me?). I also loved that the solution showed Kaye as a poker player who was not afraid to bluff. Well played, Mrs. Kaye. Well played.

My only complaint is that the plot, more or less, uncoiled itself and the finer details of the motive can only be guessed at, but those are only small specks on an excellently written and competently plotted detective story.

So you can definitely expect my return to this series in the not so distant future!