Alan Melville was a jack-of-all-trades in the world of entertainment and occupied many different roles around the stage, ranging from being a playwright and musical lyricist to acting and producing gigs, but really gained name recognition as one of Britain's first television personalities – appearing on programs like What's My Line? and hosting a satiric revue series called Alan Melville's A to Z. It was a rich, varied career, but one of the most interesting chapters from his rise to fame seemed, until recently, to have been largely forgotten.

When Melville was still a young man in his twenties, he wrote a handful of mystery novels reminiscent of the works of Leo Bruce and Edmund Crispin. However, they rapidly vanished from the public conscience and eventually became so obscure that even the Golden Age of Detection Wiki, a veritable Who's Who of Who the Hell Are They, has no mention of Melville or any of his detective stories, which goes to show just how obscure he has gotten as a mystery writer – considering the site has pages for such unknowns as Pierre Audemars, Hector Hawton and Inez Oellrichs. One of the oldest mentions of his work I could find was a review from 2009 of Quick Curtain (1934), but the dust soon settled down and slowly began to accumulate again. 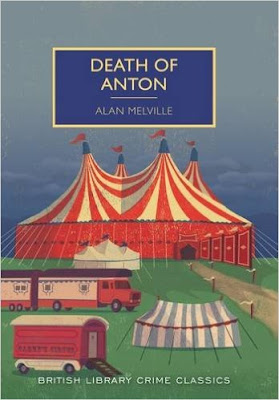 That is until last year, when the Poisoned Pen Press, under the banner of the British Library Crime Classics, reissued two of Melville's six mystery novels: the aforementioned Quick Curtain and Death of Anton (1936). Both of them were well received and highly praised by some of my fellow connoisseurs in murder. So I had to sample one of those two for myself.

Death of Anton lifts one of the tent-flaps to give the reader a glimpse of what lies beyond the sandy rink of the circus, which turns out to be an ill-tempered tiger, jealousy and about half a dozen potential motives for bloody murder – all of them belonging to a troupe of potential, colorful and promising would-be murderers.

The story begins with an introduction of the circus artist who are in the employ of Joseph Carey's World-Famous Circus and Menagerie, which is owned and ran by the man whose name is plastered across the circus' banner, Mr. Joseph Carey. As the proprietor, Carey always puts his employees up in hotels or boarding-houses, but he's always to be found "on the scene of the battle," in a green-and-white caravan, which is where night-time visitors are seen whistling to a closed front door. According to the rumor-mill, he also received some (married) women and one of his nightly rendezvous got him in a knife-fight with an Italian high-wire walker. So that in itself would have been enough material for a single detective story, but there are more characters trampling around the circus tents.

Loretta and Lorimer were high-flying trapeze artists and had shown "a complete disregard for the laws of gravity" since their childhood, but, lately, Lorimer has been hearing rumors about Loretta and Carey. One of the places where they decide to have a marital quarrel is while flying through the air in the Big Top and they laughed "at the idea of using a net in their act." Ernest Mayhew is billed on the posters as "Dodo," King of Clowns, but without a face full of greasepaint he impresses people as a meddlesome inspector of education who lugs around an impressive looking copy of T.E. Lawrence's Seven Pillars of Wisdom (1922) – which he does in order to create the impression of being an intelligent man who can afford to pay thirty shillings for a book. Lars Peterson is fond of a drink or two and is the personal trainer of Horace, "The World's Most Intelligent Performing Sea-Lion," and Miller used to be part of the circus’ main act, but is now reduced to being one of the ringside assistants and drinking.

The star of the main act is Herr Ludwig Kranz, billed as "Anton," who performs an exciting act with his seven Bengal tigers, but one of them, Peter, engages Anton in a battle of willpower for dominance. So nobody is surprised when Anton's body is found on the floor of the cage, "red with blood," but a closer examination of the body reveals three bullet holes – proving he was not mauled to death by the tigers.

Luckily, a policeman from Scotland Yard, Detective-Inspector Minto, who had been in town on a family-related matter: his sister, Claire, has a penchant for getting herself in trouble and had once hopped on a train to Milan, after Britons became very unpopular, to opine "in a loud voice that Signor Mussolini was an ass," but this time she had outdone herself. She had gotten herself engaged to a dull, colorless salesman of vacuum cleaners. 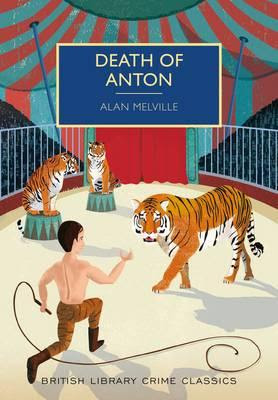 They also have a brother, a Catholic priest, to whom the murderer confesses his crime, but he's bound to secrecy. However, it suggests to Minto that the murderer must have been a Catholic, which is a plot strand that should have been expanded upon. It's mainly used to discredit a false solution, confine Minto's attention to a small circle of suspects and confirming his suspicion – by tricking his poor brother into revealing more than he wished to. So this clue serves primarily as a plot-mover. It kept the story going when a perfectly good and acceptable solution had presented itself to the characters, which could have easily taken the wind out of the sails of the story and plot.

It was put to use in service of the story, but I feel a clever clue could have been carved out of this fact.

Anyhow, the introduction of all of these characters, life in a traveling circus and Minto's investigation is told with zest and humor, which is filled with funny exchanges and winking at the detective story. Something that's demonstrated when Minto compiles a list of Questions and Answers to order his thoughts or when he (somewhat illegally) poses as a Housing Inspector to gain access to a building. Or when he removes (i.e. steals) a piece of evidence from a pawnshop. It makes for a fun, fast and mostly light-hearted story in the spirit of the comedy-of-manners and tongue-in-cheek style of mysteries, such as Caryl Brahms and S.J. Simon's delightful A Bullet in the Balled (1937), but there's a rather dark, jarring side-note to the last quarter of the book.

Minto decided to set a trap for the murderer and he used one of the innocent characters as human bait, but this has horrible consequences and the fate this person suffered is arguably worse than getting shot, stabbed or bludgeoned by a killer desperately trying to get rid of some loose ends – which made Minto "most grateful for the five minutes' grace" the unfolding tragedy had given him. Well, he was sorry, "very sorry indeed," and there's a bit of a cop-out in the final chapter ("He'll be all right"), but the whole incident made Minto a slightly less sympathetic and fun character.

Well, that being said, I very much enjoyed the overall book. It was a fun, quirky story with an interesting backdrop for the plot and made good use of the tigers. I was able to identify the murderer fairly early on in the game, but the second plot-thread niftily tied every character and plot-points together – which resulted in a mass arrest, for one thing or another, which fitted the overall plot of the story. And that made for a good ending. Still, I would not give this one the full five stars that some have given it, but completely agree Death of Anton is a worthy addition to the British Library and one that's definitely recommended. Particularly if your one of those readers who's still mourning about the fact that you have run through all of the Edmund Crispin and Leo Bruce mysteries on your TBR-pile.

I do hope this review has done some justice to this book, because time forced me to bang out this review in a very short time. So there's my defense for the mistakes/typos that usually find their way into my blog-posts. Finally, I have a legitimate excuse for them!
Geplaatst door TomCat on 5/29/2016