"And I would have gotten away with it, too, if it weren't for you meddling kids!"
- Villain of the Week (Scooby Doo, Where Are You?)

The Mystery of the Moaning Cave (1968) is the tenth entry in a long-running series of juvenile detective stories, starring "those three lads who call themselves The Three Investigators," but it was the first one that came from the hands of Dennis Lynds – a decorated crime-writer and pen-for-hire who operated for these books under the penname of "William Arden." He would become one of the three most prolific contributors to the series and his stories appear to have been on par with those of his predecessor, Robert Arthur. So let's take a look at his first story about those three lads. 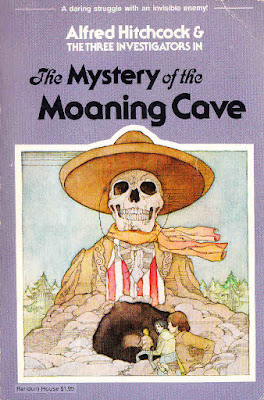 One of three investigators, Pete Crenshaw, is spending a two-week vacation with Mr. and Mrs. Dalton, the new owners of the Crooked-Y Ranch, which is situated in the Moaning Valley of sun-soaked California and the place has a history as rich as a prospector's dream! The place had "earned its strange name from ancient Indian legends" and "some violent events of old Spanish days," but one of the old legends, sounds of eerie moaning coming from El Diablo's Cave, seems to have stirred from its slumber – after "fifty years of silence." But that's not all.

A growing number of ranch hands sustained injuries in suspicious looking accidents and their misfortunes occurred simultaneously with the return of the spooky groans, grunts and moans emanating from the bowels of Devil Mountain. Pete soon came to realization that his hosts, the Daltons, were extremely worried about the situation: an extensive exploration of the cave "had revealed no explanation" and "the sheriff could not pursue ghosts or legends." So Pete called in the help of Jupe and Bob.

The opening chapter of the book has Jupe, Pete and Bob experiencing many of the strange occurrences first hand, which begins when they hear a long, drawn-out and chilling "Aaoooahhhhhh—ooooooooooooo—ooooo—oo" coming from the mouth of the cave, but they also stumble across another site of an accident. One of the ranchers was surprised by a rock fall and is found with his leg twisted beneath a pile of stones.

I thought the opening of the story was a trifle confusing, since it began smack in the middle of these events, but subsequent chapters filled in the blanks and told some of the legendary tales from the region – all of them related to the honeycomb of caves inside the belly of Devil Mountain.

There is an old Indian legend about "a black and shiny monster," called The Old One, living in a pool deep inside the cave, but the most famous story revolves around the short life of an illustrious and notorious young bandit from the late 19th century. Gaspar Delgado was the last of his family and the land that was granted to his ancestors by the Spanish Crown was, acre by acre, given away, lost or simply stolen by the English settlers from the East Coast – which made the eighteen year old long "to avenge his family and regain his land." He became a plague to the region, scaring away tax collectors and raiding government offices, which earned him the nickname of "El Diablo," but he was eventually caught, stood trial and was sentenced to hang. 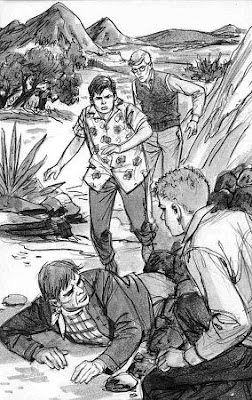 However, the story did not end there: El Diablo made "a daring daylight escape" from the prison and was wounded in the process by the sheriff and his posse. He fled into the titular cave and the place was surrounded by the sheriff, but the only thing they ever caught of the young bandit were the sounds of his grunts and moans coming from the mouth of the cave. A body was never recovered from the honeycomb of caves.

So one of the questions the boys are facing is how these stories relate to the moaning cave, but there are some practical questions that require some thinking. Such as why the cave suddenly stops moaning every time they come near it and how they can slip inside without being observed by the invisible watchman.

Well, Jupe is the brain of the outfit and he has to give these problems some thought. He does his thinking in a scene evoking the image of Sherlock Holmes from "The Man with the Twisted Lip," from The Adventures of Sherlock Holmes (1892), in which a bathrobe-clad Holmes sits cross-legged on a mountain of pillows and drags on his clay-pipe – while giving full attention to the case in front of him. Pete and Bob wake up in the upstairs bedroom of the Crooked-Y to find Jupe sitting cross-legged on the floor, "looking like a small Buddha in his bathrobe," with a large sheet of paper spread out in front of him. The paper is covered with pencil lines. Bob explains to Pete that he had been sitting like that for an hour and when he stirs back to life, Jupe tells them he was "ascertaining the exact topographical arrangement of Moaning Valley" and how the key to the solution "lies in the physical pattern."

Well, the rest of the book has them roaming around the cave, collecting bits of information and talking with the people in the area, such as a visiting history professor and an old prospector, which also places them in several dangerous spots – dangers that were somewhat reminiscent of what they had to endure in The Secret of Skeleton Island (1966). Like having a scare while scuba-diving and being trapped in a cavern. They were trapped there by a true legend!

All I can say about these adventurous bits and pieces is that they were, as usual, fun to read and made for an engaging story, but the plotting and clueing was a bit iffy. Arden made good use of the motive and found a somewhat original angle to it, but you can hardly expect children/young teenagers to deduce the exact truth from "the rough, blackish stone" Jupe "had found in the mine-shaft passage." No. It's not entirely what you think it is. That's where the second problem comes into play: one of the plot-threads, regarding the explanation, is not shown until the ending and that makes it truly impossible to piece together the answer for yourself.

The Mystery of the Moaning Cave should really be read and enjoyed on cruise control, because it is not as fair as an adventure-filled mystery novel as some of the others, but, regardless of that, still a very enjoyable read. So you still haven't seen the last of The Three Investigators on this blog.