Previously, I reviewed a mystery novel set in colonial Kenya and a collection of holiday-themed detective stories, which seemed like a fun theme to explore further and there happened to be a sundry of mysteries on my pile of unread books that would lend themselves to that end – such as the fittingly titled subject of this blog-post.

Murder Abroad (1939) is the thirteenth novel from E.R. Punshon's series of detective stories about Detective-Sergeant Bobby Owen and was hauled from the bowels of obscurity by the Dean Street Press. As to be expected, genre-historian and professional mystery addict, Curt Evans, wrote an insightful introduction in which he pointed out that the plot of the story was "partially based on a then notorious unsolved crime" – a case that became "a press sensation" with "accounts of the affair appearing in newspapers around the world." It added an extra layer of depth to an already compelling and involved detective story. 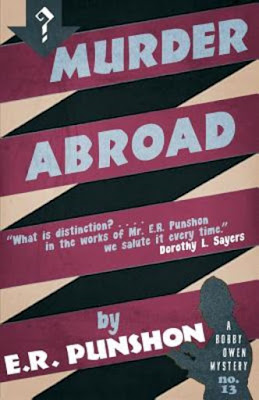 Bobby Owen is engaged to Olive Farrar, owner of a West End hat shop, but his modest police salary and her meager earnings are hardly sufficient to found a household upon. Providentially, one of Farrar's dependable, socially-connected customers, Lady Markham, has a proposal for them that would net them enough money to get married. What does the proposal entail?

Lady Markham had a sister, Miss Polthwaite, who was living the life of an artiste-peintre in Citry-sur-l'eau, a picturesque village in the French Auvergne, but her seemingly quiet, peaceful existence was cut short when her body was retrieved from the bottom of a nearby well – a paintbrush was clasped in her hand and a picture was found on her easel.

Local authorities washed their hands from the affair and shelved the matter as a tragic case of suicide. However, the family believes she was murdered and the police admitted as much in private, but refused to state their suspicions openly "for fear of harming the tourist trade." A fear supported by a potential motive that's applicably to nearly everyone in the district: Miss Polthwaite was an eccentric bird and believed a revolution was on the horizon, "with guillotines in Trafalgar Square and everyone with any money shot at dawn," which is why she began to convert her money into diamonds – mainly uncut stones. Only problem is the police were unable to find any of them in the refurbished mill she was living in and her family is convinced she has hidden them somewhere on the premise.

If Bobby can find the stones, he earns himself an eight thousand pound finder's fee and Lady Markham has promised to use her influence to get him appointed as the private secretary of their local chief constable. So he finds himself on a "sort of a threefold mission," as he's asked to find the diamonds, the murderer and the truth, which has to do in an unofficial capacity and in the guise of a sketch-artist of the amateurish kind. But he has to do so in order to secure his future with Olive and soon finds himself descending on the unsuspected citizenry of the French village.

The detective work in Murder Abroad consists largely of talking to the locals and fellow visitors to the region, but Punshon provided Bobby with a palette of truly colorful characters. They make for "a formidable list of possibles."

One of the first people Bobby exchanges opinions with is the local schoolmaster, Eudes, who's a rabid anti-clerical communist and very eager to secure funds "to establish a journal of liberty and enlightenment." Diametrically opposed to him is Abbé Granges, Curé of Citry-sur-l'eau, who has wild dreams of restoring both the church and the faith of the villagers to its former glory. But he's not the only man of the cloth residing in the area: the hill-tops of the village have become the home of Abbé Taylour and there are whispered rumors of him being an excommunicated priest, but his presence seems to have no bearing on the death that took place in the valley below. The person favored by the villagers to fulfill the role of murderer is young Charles Camion, son of the proprietor of the local hotel, rumored to have been the lover of the dead woman and "needed money to realize ambitions Miss Polthwaite had herself aroused," but they were also overhead having a violent exchange of words. She might have refused to give him the money and as an answer he might have shoved her down the well. There is another young man, Henry Volny, who is the son of a wealthy farmer, but his father keeps him on a short leash and refused to pay for his dream of becoming a professional boxer. Volny was also a rival of Camion for the affection of a local girl.

Further more, there are several of Bobby's compatriots in the vicinity: Basil Shields is an artist who acted as the dead woman's art teacher and her renovated mill-house has been let to a Mr. and Mrs. Williams – who seem to be everything but reputable folks. 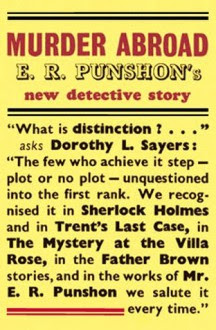 Finally, there is, arguably, the best and finest drafted character from the cast: a blind beggar, named Père Trouché, who heard so well that people doubted his blindness. I think Punshon missed a golden opportunity here to introduce a secondary detective to his repertoire, because Trouché would have shined in the role of a blind, homeless and disreputable detective character roaming the French countryside. Sadly, we have to settle for his memorable performance in this story and the great, but sad, sendoff he got towards the end of the story.

Anyway, a significant portion of the story consists of Bobby having conversations with this motley bunch of characters, which slowly expose the "many currents and cross-currents at work" in the once quiet and peaceful village – many of them "resulted from the Polthwaite tragedy." Bobby also spends time sketching and when his tired brain refuses to work he took long, tiring walks across "the slopes of the Bornay Massif." He also observes in these moments that playing detective is a lot easier when done in an official capacity with a machine, like Scotland Yard, at your back.

So this is genuinely a detective story with a strong, well-conceived holiday atmosphere, but the conversational plot, the brief excursions across the French hillsides and Punshon's wordy, decorative writing-style also gave Murder Abroad a pace similar to that of quiet, slow-moving mountain stream – which suddenly begins to rush violently towards the end of the story and places Bobby in precarious position. I've no doubt that this part of the story will cause some confusion, because there's a hoard of characters who apparently wanted to be in on the action and there's a moment where it's not clear who's responsible for what. However, the confusion is quickly dispelled and it becomes clear as to what happened to whom, but the best part of these final chapters is a very unusual scene involving the final moments of one of the characters. It's something you would expect from the very unorthodox Gladys Mitchell (e.g. Tom Brown's Body, 1949).

Anyhow, I have prattled on long enough and I'll end this reviewing by saying that Murder Abroad is a perfect read for the summer holidays, because the plot and story requires the reader to have several hours of leisure to stroll (not race) across its many pages and chapters.

Well, I have one or two more of these foreign-set, holiday-themed mysteries on the pile, but the next one will be a much lighter (and probably faster) read than this one. So you can probably expect the next review before the end of this week. Stay tuned!
Geplaatst door TomCat on 5/18/2016