Jan Gordon was born as Godfrey Jervis Gordon in England, 1882, who studied mine engineering at the Truro School of Mining and worked in Malaysia as a mine manager, but spend his spare time drawing and this inspired him to pursue a more artistic vocation upon his return to England – enrolling into the London School of Art. Gordon would go on from there to become a noted writer, musician and artist known for his paintings of the First World War and camouflage art. 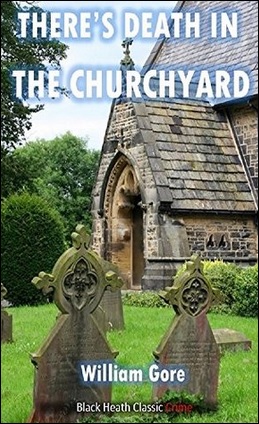 You can call me bias, if you want, but I believe Gordon peaked as an artist during the 1930s when he penned three detective novels, There's Death in the Churchyard (1934), Death in the Wheelbarrow (1935) and Murder Most Artistic (1937), all written under the nom-de-plume of "William Gore." According to "The Jan and Cora Gordon Pages," these detective stories bestowed "the nickname of 'Bloody Bill' upon Jan" and told how he had to admit that writing them "drove him potty," because he found "the crime genre far more difficult than that of travel writing." So that would explain why he wrote only three of them.

I did a background check on the most appealing sounding titles in their catalog and came across a promising review of There's Death in the Churchyard by William F. Deeck, posted on Mystery File, who described it as "a well-plotted, well-written and amusing novel." The comments underneath his post showed how rare the book was at the time the review was published, because there were only two copies available on the internet that had hefty price-tags attached to them – an ex-library copy would have set you back $80 and a second-printing in DJ (in poor condition) went for $200. So this brand new edition is a splendid alternative for ordinary readers, like myself, who merely want an opportunity to read these rare, long-forgotten detective stories.

One of the central character of There's Death in the Churchyard is Captain Richard Stoyner, the Squire of Sutton Eacham, who's a war hero, a famous explorer and "a scientist of local repute."

Captain Stoyner is trying to produce "a cheap and satisfactory carburant," or motor spirit, from waste vegetable products. This potentially revolutionary research is bankrolled by Pondersby Jonson, but Stoyner had no idea Jonson was "a financial shark of the worst order." A bloodsucker who had "ruined dozens" with his dirty, underhanded tricks.

The person who alerts Stoyner to Jonson's shady business ethics is a past victim of the financier, Harold Gunning, who had since then been making a name as a landscape artist and had been painting around Sutton Hall all summer long – which is where he learned of Jonson's involvement with Stoyner. This resulted in a confrontation between them and "the City shark" told him to hand over full control over his project in exchange for the few thousand necessary to complete his research, but a furious Stoyner reminded him that without him completing his work he would not be able to reap the benefits of his invention. So this clash ended in a stalemate that slightly favored the financier. However, the confrontation cast the long shadow of suspicion over Stoyner when his bogeyman unexpectedly died during a Sunday morning church service. 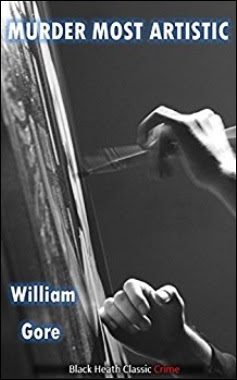 Jonson was staying the week-end at Stoyner's ancestral home and decided to accompany his host to church, but during the service he becomes gravely ill and Stoyner tries to rush him out of the place. But they don't make it pass the churchyard.

A horror-stricken Jonson, "fear twitching his every feature," pushes Stoyner away and loudly denounces him as a murderer, mutters the word poison and collapses on the churchyard walk. The poison in question belonged to the curare group, used during witch-doctors' ceremonies in South America, which Stoyner obtained during a dangerous expedition into the hinterlands of Brazil and he had an opportunity to introduce the poison into the victim's bloodstream – when he treated a cut in his finger before going to church. Such poisons can have delayed actions. Particularly when the substance is deteriorated by time and therefore slower in action.

So the situation looks very dire for the local Squire and war hero, but the village is crawling with detectives, professional and amateur alike, who try to get to the bottom of the case. The book could very well have been titled Too Many Detectives.

Superintendent Priddom and Colonel Henderby, the Chief Constable, find themselves between a rock and a hard place. On the one hand, the prime suspect is a pillar of the community, but, on the other one, even the community believes him to be guilty. And this is what lands Stoyner in the docks to stand trial for murder. The end of the trial has a great scene centering on his manservant and assistant, Burrows, who gives a public demonstration of old-school loyalty and friendship. It made him my favorite character in the book!

Anyway, there are enough people, like Burrows, who believe him to be innocent and they go out of their way to prove it (e.g. Burrows' courtroom shenanigans).

Belle is the sister-in-law of the vicar and in love with Stoyner, everyone around them expected a proposal to marry, sooner or later, which is why she engages "a private inquiry agent," Mr. Elkings, who pokes around the village for clues. Elkings gets entangled in a minor feud with Gunning, who he tags as the potential murderer, but the painter also knows how to play detective and makes some astute observations outing Elkings as a detective – much to his annoyance. Belle also has a young niece, Ally, who could have wandered from the pages of a Gladys Mitchell novels. She's a very convincingly drawn child and forms "the Captain Dick rescue gang" with the choir boys and they actually bring part of the solution to the adult characters.

However, the one who eventually stumbles to the truth is Reverend James Cliffe. During a church service, he suddenly sees the whole truth by asking himself the obvious question that nobody, up to that point, asked themselves. What really surprised me about to the explanation is how incredibly close my initial inkling was, but abandoned that line of reasoning when the story appeared to had morphed into a how-was-it-done type of detective story. 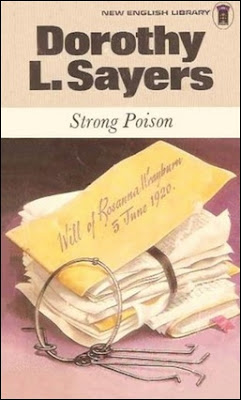 I knew There's Death in the Churchyard was praised by Dorothy L. Sayers and she had once stated that it was much more interesting to try to figure out how the crime was committed than identifying the murderer. So the direction of the plot made me presume the book was plotted in a similar fashion as Sayers' own Whose Body? (1923), Unnatural Death (1927) and Strong Poison (1930), which would explain her warm praise for the book. But, instead, it turned out to be more along the lines of Agatha Christie's least-likely-suspect gambit without the rug-puller of a surprise (feeling) fastened to it.

An observant and experience mystery reader can work out the solution for themselves, but only if you don't make my mistake by thinking halfway through that you're reading a how-dun-it instead of a regular who-dun-it.

One more thing about the how of the murder: I think a very well-known mystery writer, who was usually known as a true original and innovator, might have appropriated the poisoning trick for a novel about an entire series of curare killings (click here for a review of that book). The solutions are eerily similar.

So, all in all, There's Death in the Churchyard is (indeed) an amusing, well-written detective novel with a competent and solvable enough plot, which (so far) stands alongside Nicholas Brady's The Fair Murder (1933) and Ebenezer Investigates (1934) as one of the more stronger titles in the catalog of Black Heath Editions.

Finally, the next post on this blog is most likely going to be my best-of list of 2017 and will go up before Christmas, but not entirely sure whether I'll get around to posting anything else until after Christmas. So this might be the last regular review until then.
Geplaatst door TomCat on 12/18/2017