The 63rd volume of Gosho Aoyama's ever-expanding series, known around the world as either Case Closed or Detective Conan, begins with the final two chapters of the story that ended the previous volume and concerns a locked car mystery – reminiscent of Edward D. Hoch's "Captain Leopold and the Impossible Murder" (collected in Murder Impossible, 1990). A car driven by a dead man who was the only occupant of the vehicle!

This miraculous situation followed immediately upon the events of the main story-arc in the previous volume and occurred when our hero's were driving homeward. A car sped past them on the freeway and came to a standstill against the guardrail, but when they investigated they found a dead man behind the wheel with ligature marks across his throat. The man had been throttled to death. Only problem is that he was only person found inside the car. A peculiar problem that finally offers a case for the dream-team of Jimmy Kudo and Harley Hartwell, "the two biggest teen detectives in Japan," who immediately begin to check out the cars that were netted in a road blockade by the police and they picked three cars with potential suspects – all of whom turned out to have a personal connection with the murdered man.

The victim is identified as the leader of a street racing team, The Red Comets, who was involved in a deadly accident and, as to be expected, that past tragedy proves to be the heart and soul of the case. But the brainy part is definitely the devious trick used to murder a lonely driver, inside his car, while speeding down the freeway. Hoch could not have imagined a better explanation to this particular impossible problem!

An additional complication of this story is that Kudo's serum is rapidly losing its potency and this gives him a limited amount of time to solve the case, because the maintenance of his long-guarded secret depends on it. Goddammit, Kudo! Just tell her already!

The next three chapters form a nifty little impossible crime story about "a murder that could only be committed with sushi."

Doc Agasa takes Conan and the Junior Detective League to a revolving sushi bar where the various dishes, like squid, sea bream and flounder, pass the customers on a conveyor belt and they only have to take the dishes they wish to eat – after which the number of empty plates make up the bill. At the sushi bar, they meet a well-known, but unpleasant and feared food critic, who has no less than three enemies around him. So there are three prime suspects when the food critic drops dead from cyanide poisoning.

Only problem is how the murderer managed to make the victim taking "the poisoned plate" from the conveyor belt without anyone else accidentally picking it.

The story has a cracking false solution, playing on the left handedness of the victim, but the actual explanation neatly plays on the clue of the grains of rice stuck to the victim's finger and the customs of a sushi bar. My only complaint is that the murderer's motive was a trifle weak. Apart from that, I though this was a clever and original impossible poisoning story that excellently made use of the sushi bar setting.

However, I did not care all that much about the third story, which also consists of three chapters.

On the behest of Gonsaku Kaminski, Chairman of the Kaminski Group, Nichiuri TV is organized a multi-event competition for men who share the chairman's family name and "a genuine ink painting by the famous artist and priest Sankyu" is the grand prize of the tournament. The competitive events are a fitness test, a singing contest and a written kanji test, but the best contests aren't the ones who are making it to the next round. And then the event comes to a sudden end when one of the three finalists pushes the chairman down a flight of stairs. 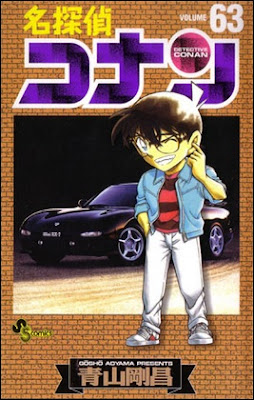 This story has two (minor) points of interest: 1) one of the suspected finalists is the father of a member of the Junior Detective League and 2) the kanji-based clue can actually be used by Western readers who are willing to closely scrutinize the text and art-work – which is not always the case with the language-based clues and stories in this series. So that was nice change, but the story, as a whole, is unremarkable.

You surely can't label the final story in this collection as unremarkable, because it's an engine-revving impossible crime tale about a drag racer whose car can reputedly fly!

Richard Moore learns of the resurrection of "the untouchable driver," The Silver Witch of Fuyuna Pass, who "turned Mt. Fuyuna upside down a few years ago," but the silver-white Mazda of the Witch has recently reemerged and this has atracted a crowd of drag racers who challenged her – resulting in a number of accidents. So the police is trying to put an end to it. There is, however, a supernatural aspect to the case, because the Mazda can apparently fly. One of the witnesses even claims she saw the Witch step out of the car, standing in mid-air, and waved at her.

Moore, Rachel and Conan get to witness this apparent impossibility first-hand when the Mazda sped past them and drove, or rather passed, through a guardrail above a cliff. However, the car did not plunge into the dark depths, but simply drove on, in mid-air, with nothing but a thick mist-bank as the road underneath its wheels.

The police stops three white Mazdas, each with two occupants, and Conan deduces the culprits based on the items found in the cars, which subsequently also reveals how the flying car illusion was done. Interestingly, the explanation closely resembles the false solution Ken Holt and Sandy Allen imagined for a very similar impossibility in Bruce Campbell's The Clue of the Phantom Car (1953). Aoyama's take on the ghost car trick was slightly more cartoony than the (false) science-project solution by Campbell, but absolutely allowable on the pages of a comic book detective.

So, all in all, this was an almost rock solid volume, comprising of three excellent impossible crime stories, which more than made up for the weaker story about the curious competition.

On a final note, the next blog-post is going to my best-of list of 2017 and will go live on Saturday. A week earlier than usual, I know, but it worked out better like that this time. So glue those eyes to your screen, because it's coming!
Geplaatst door TomCat on 12/21/2017