"...one can sometimes do good by being the right person in the wrong place."
- Father Brown (G.K. Chesterton's "The Sins of Prince Saradine," collected in The Innocence of Father Brown, 1911)

John V. Turner's detective stories about Rev. Ebenezer Buckle, published as by "Nicholas Brady," is perhaps my favorite discovery of 2017 and the two books I read by him, The Fair Murder (1933) and Ebenezer Investigates (1934), are shoe-ins for my best-of list of this year – which will be posted at the end of this month. So I wanted to read one more of Rev. Buckle novels before the year draws to a close and picked Week-end Murder (1934). 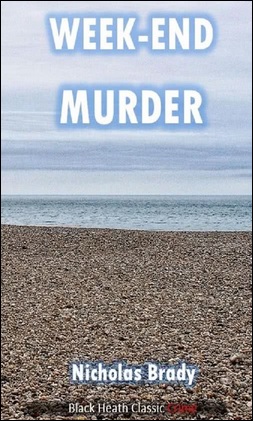 All four Rev. Buckle titles have been reprinted by a small publishing outfit, Black Heath Editions, who recently also reissued a fifth title with the Brady byline, Coupons for Death (1944), but that one appears to be a standalone. Nevertheless, the book used to be obscure enough that when John Norris of Pretty Sinister Books finally acquired a hardcover, dust-jacketed copy he referred to it as an "amazing coup." And if that doesn't qualify as a Stamp of Authentic Obscurity, I don't know what does.

Week-end Murder is divided into six (longish) chapters and the leisurely paced opening chapter paints an interesting picture of the story's backdrop, Bellingham Bay, which plays a key role in the plot.

Bellingham Bay had been known to generations of local fishermen as Mellerton Bay, but "decay had hovered over the bay for more than a century" and only fifty of its denizens had clung to their "desolate cottages" by the time the 1920s drew to a close. By then, the once plentiful fish in the bay had retreated when a nearby town began to use it as a sewer outlet. So all that remained for the locals were the meager catchings of herring fishing and digging for the elusive lug worms, known as the "Mellerton Lugs," which were sold at "tenpence a score" to passing anglers as delectable bait and this slow decay continued until it was accelerated by the arrival of a stranger, Percival Bellingham – who bought the ground of the village and leveled the place.

The "poverty-stricken fishermen were turned out of their homes" and the public house was knocked down, but rose only three months later as a beer palace encircled by two-hundred new bungalows. Bellingham had brought "The Eden on the Kentish Coast" to fruition and it was a unmitigated disaster. And a huge financial lost.

A year later, the "Kentish Eden" had a deficit of £24,000. Bellingham had fled from the ghost town of two-hundred empty bungalows and over three-hundred angry investors. What he left behind was a crumbling promenade and the publican of the beer hall who had remained as one of the last remaining inhabitants of the bay. So the village would had been, once again, consigned to obscurity, but the arrival of a buyer once again thoroughly transformed the character of the once ancient fishing village.
Mackay Saunders bought the "flock of bungalows" and the village, like all of his places, procured a reputation that made men snicker, women blush and evoked scathing comments from the judges presiding over the Divorce Courts. Saunders doesn't give a penny for Victorian-era morals and prefers that his places are "filled at week-ends by broad-minded people." So the place, under direction of its new owner, became quickly known as "Immorality Corner." A week-end resort where nobody appeared to register under their actual name or brought their own spouse with them.

Mrs. Weatherby-Weatherby Elkin "clucked like an aggravated hen" to Rev. Ebenezer Buckle about that "terrible, pestilential spot," but Buckle is not too keen on visiting the place and, when he finally decides to drop by, he immediately walks onto the scene of a crime – living up to his reputation that he and murder "grew side by side." Fortunately, Buckle is "a man who mixes homicide with horticulture." 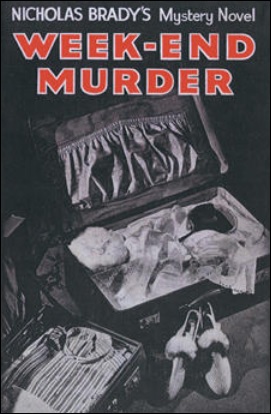 A man who had registered under the name of Percy Emerson is shot to death inside his bungalow. The fatal shot was fired mere minutes before Buckle arrived on the scene, which gives him a golden opportunity to immediately horn in on the case and demonstrate his "skill as a criminologist." I believe fans of the pure detective stories will take joy from Buckle's initial survey of the crime-scene. As he makes a number of (astute) observations about the direction of the shot, entrance-and departure of the shooter and the fact that the victim's collar and tie are missing. Buckle later supplements these observations with a series of cryptic, seemingly unrelated, questions directed at the woman, Dolly, who had accompanied the victim to the village. These questions are in regards to a tank of rain water outside the bungalow and the wages she earned as a waitress.

This approach is what made John Norris compare Rev. Buckle to one of John Dickson Carr's well-known series-detectives, Dr. Gideon Fell, who both prefer to be enigmatic wool-gatherers with a preference to "think in solitude" – until they've reached "definite and provable conclusions." So you can almost view this short-lived series as a (missing) link between G.K. Chesterton's Father Brown stories and Carr's Dr. Gideon Fell series.

At the end of the second chapter, the story takes a sharp, 180° turn when the victim is properly identified and this revelation changes the whole dynamic of the book. Inspector Dace muttered "that finishes me" and calls in the big guns at Scotland Yard.

Rev. Buckle calls in the help of his brother, Assistant Commissioner Stanley Buckle, whose familial ties has served the parson well whenever he wanted "to break through the wall of police officialdom." However, the importance of the victim's identity provided the Buckle brothers with an opportunity to collaborate on a case and the discovery of a second body, found in a garden of a vacant house in London, forces the investigators to divide into two groups. Interestingly, the shooting at the bungalow in Bellingham Bay and the murder in London are tightly linked together with little time between them, which recalls the earlier work of Christopher Bush (e.g. Dancing Death, 1931) that often hinged of the complexities of an intricately linked double murder.

Nevertheless, the London murder proves to be the weak link in a large-scale criminal operation and the Buckle brothers make quick work of tying together that second murder. They roll up practically the entire London-end of the case in record time, which places the murderer at Bellingham Bay, who's completely oblivious about what's going in London, in an ever-tighter corner.

Brady neatly fitted every component of the plot together to form a logical, entirely coherent, picture of the murders and the criminal enterprise that rested at the heart of the story. There is, however, a blemish on the story. At the end, Rev. Buckle confessed himself that it was "a most unsatisfactory case," because the pure detective-elements were lost somewhere along the way. What looked like "a mental exercise" had "deteriorated into a game of playing one human nature against another" with clues being few and far between. Rev. Buckle's deductions were primarily educated guesses that were, at times, too easily accepted as facts.

Regardless, Week-end Murder was not a bad read and how the detectives dismantled of a gang of criminals also made it an interesting read, but the overall plot simply was not as good, impressive or memorable as those Brady crafted for The Fair Murder and Ebenezer Investigates.

Sorry to have to end this review on a slightly sour note, but it is what it is and might tackle the last remaining title in this series sooner rather than later. The House of Strange Guests (1932) is reputedly a good detective novel with a locked room angle. So it's probably a better title to end this series with than Week-end Murder.
Geplaatst door TomCat on 12/15/2017