Norvin Pallas was "a free-lance writer" whose "day job was part-time accounting" and is remembered today, if he's remembered at all, as the author of a series of intelligently written, well-characterized juvenile mysteries with "complicated, logical, adult-style plots" starring a high-school newspaper reporter, Ted Wilford – inviting comparisons with the Ken Holt series by Bruce Campbell. Campbell and Pallas not only had similar series-detectives, but also had "a high regard for children" and "their thinking abilities." 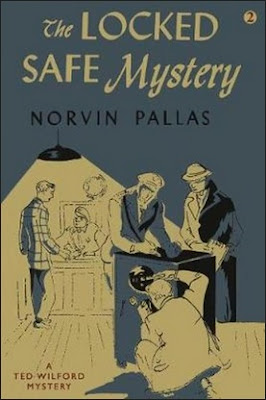 Pallas knew he was writing for children and, to use his own words, "respected them for it" and did not talk down to them. On the contrary, Pallas appeared to have treated his readership as his intellectual equals and that might have actually been a serious flaw in the series.

Mathematical puzzles, games and codes were Pallas' "consuming interest," writing such non-fiction books as Calculator Puzzles, Tricks and Games (1976) and Games with Codes and Ciphers (1994), which is reflected in the complicated plots of the Ted Wilford stories – designed like puzzles with "clues and bits of germane information." Apparently, even older readers were not always successful in anticipating the solution. This, coupled with a complete lack of action and excitement, probably made this series a little bit too dry and cerebral for its intended audience.

Nonetheless, I was intrigued when I learned of this series and one title, in particular, beckoned for my attention. You can probably deduce from the post-title what attracted my attention. What can I say? I have an unhealthy love for locked room puzzles.

But before I take a look at the book in question, I would like to point out that all of the background information was scraped from a single (PDF) article, "A Dark Horse Series: The Ted Wilfords," written by David M. Baumann and is perhaps the only credible, in-depth source of information to be found on this series – discussing the author, characters, plots and honestly assessing the strength and weaknesses of the series. A really well-written, informative and honest article. It's definitely worth a read if you're interested in juvenile detective fiction and this obscure series in particular.

The Locked Safe Mystery (1954) is the second title in a series of fifteen books, beginning with The Secret of Thunder Mountain (1951) and concluding with The Greenhouse Mystery (1967), which follows the exploits of a high-school student, Ted Wilford. Reportedly, he "grows older from one book to the next" and graduates from high-school halfway through the series with the last books taking place during his college years. This second title shows him taking his first, tentative steps over the threshold of adulthood and gets taste of the perks, and challenges, that come with the responsibilities trust upon him as a young adult.

The story begins with Ted receiving some bad news from his doctor: a nagging ankle injury makes him ineligible for the high-school football team, because his ankle is still vulnerable and not ready for the strain of a football game. So this naturally puts a damper on his mood. However, the Forestdale High School newspaper, the Statesman, unanimously elects him as their new editor-in-chief and his hometown's twice-weekly paper, The Town Crier, took him on as a special high-school correspondent – following in the footsteps of his older brother, Ronald Wilford. Over the course of the story, Ted learns (as editor) that you can't please anyone and (as a cub-correspondent) that you have to begin at the bottom of the ladder. But this is not all he has on his plate.

Ted is asked by the new assistant principle of the school, Mr. Clayton, to assist him with the annual charity fund raiser during the Fall Festival and the event netted a sum of $13,000, which is placed in a strong-box and locked inside the school safe. However, the money disappears from the safe and only three people knew the combination: the high-school principle, the assistant principle and a secretary, but only one of those three people, namely Mr. Clayton, has inexplicably disappeared. Ted is the only person who really believes him to be innocent and writes an editorial, accidentally published in The Town Crier, making a case in his favor. Something, in itself, that will prove to be valuable lesson to the aspiring newspaper reporter.

So the problem of the theft of the charity money from the locked school safe, if you believe those three aforementioned people to be innocent, presents the reader with a quasi-impossible situation.

Unfortunately, this problem is resolved during a dry-as-dust courtroom scene when a lock-expert gives a technical explanation for this problem that you expect to find in Freeman Wills Crofts or John Rhode. You can hardly blame children, or even (older) teenagers, for not figuring out this trick. Which is a pity, since I can think of at least two tricks this particular thief could have used to open the safe. On the upside, this explanation revealed a second layer to the problem that's a genuine, full-fledged locked room puzzle. I can't say too much about it, because this development comes very late in the story, but the locked room trick was decent enough. A trick of the same caliber as Bruce Campbell's The Mystery of the Invisible Enemy (1959) and William Arden's The Mystery of the Shrinking House (1972).

Well, this is all I can really say about The Locked Safe Mystery. The story is skillfully-written, cleverly plotted and realistically presented, especially the life and personality of the main-character, Ted, but the pace is incredibly slow and the story is completely devoid of action or excitement – actually making this some kind of crossword puzzle in prose form. Personally, as a plot-oriented mystery reader, I didn't mind too much, but I have to wonder how this approach was able to attract younger readers.

I have mentioned above how this series has been compared to the Ken Holt series, but Sam and Beryl Epstein, who were behind the Campbell penname, were far more successful in balancing intelligent plotting with exciting writing and more realistic characterization to craft engaging detective stories (e.g. The Clue of the Phantom Car, 1953). The Locked Safe Mystery had intellect and a heart that was in the right place, but had no energy and was missing that all-important spark of life. Something that's absolutely necessary in a juvenile detective novel.

Still, this was an interesting read and is yet another impossible crime novel from the juvenile corner of the genre that has been overlooked by such locked room experts as Robert Adey. I hope John Pugmire, of LRI, adds them to the forthcoming supplemental edition of Adey's Locked Room Murders (1991) in 2019. They deserve to be finally acknowledged.
Geplaatst door TomCat on 9/12/2018