The Singing Masons (1950) by Francis Vivian

Last week, I reviewed at The Elusive Bowman (1951) by Francis Vivian, an obscure, long-lost mystery novelist, who has been resuscitated from literary oblivion with the imminent republication of his entire Inspector Gordon Knollis series on October 1, 2018 – courtesy of Dean Street Press. The Elusive Bowman was a well-written, richly plotted detective novel and promised to return to Vivian before too long. And then our in-house genre-historian, Curt Evans, wrote an enticing blog-post on The Singing Masons (1950). So I decided to make that one my next read. 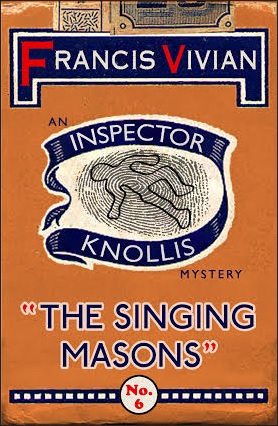 The Singing Masons is the sixth title in the series and has a pleasantly involved plot as intricately complex as the diurnal flight patterns of honey bees.

Samuel Heatherington is a retired carpenter and "a bee-master of the old school," who has worked with bees since he was twelve and what he didn't know about them wasn't worth knowing, which brought even the most reputed bee-experts to his cottage garden in the village of Newbourne – to "sit and sip the nectar of experience." One day, a new queen had emerged in one of his twelve hives to take over the duties of the old queen and a hum of bees began to swarm to look for a new hive. Old Heatherington tracks the swarm back to the orchard garden of an unoccupied cottage.

The cottage used to belong to the late Mrs. Roxana Doughty, a writer of romantic novels, who disliked bees and stuck to the opinion that they were "nasty stinging insects." So the old bee-keeper is surprised to find an empty hive standing on two flagstones at the far end of the cottage and his swarm had began to occupy it.

However, the spot is too damp for the bees and he decides to give this swarm to two of his young friends, Philip and Georgie Maynard, who had a spell of bad luck recently when they lost of all their fruit trees, bees, a honey house and even their unborn baby – all of which play a vital part in the plot. The Maynards arrive at the cottage to take the swarm back home when the possibility of a well below the flagstones is mentioned, which would explain the dampness of the spot. Georgie is curious to learn whether or not the hive is standing on the covered mouth of an abandoned, long-since forgotten well.

So they decide to humor her, but, when they move the flagstones, they notice "a queer smell." When a torch-light is shone down the depths of the well, they can discern a dark, misshapen form "huddled against the brickwork." The form turns out to be the decomposed body of Georgie's missing cousin, Gerald "Jerry" Batley. A water-damaged canister of cyanide is found in his pocket.

Detective-Inspector Gordon Knollis, of Scotland Yard, is placed in charge of the investigation and together with a local policeman, Inspector Wilson, has to find his way out of a case that closely resembles a maze-like honeycomb.

Batley was a good looking, charming and ambitious young man who had been engaged to the daughter of "the town's star lawyer," Daphne Moreland, but only wanted to marry her in order to get access to her family coffers – or, as he called it, "stinging Daph and the Moreland old oak chest." On top of that, Batley had been an incorrigible philanderer who has had an extramarital with Philip Maynard's married sister, Bernice Lanson. Even his own cousin had not been exempt from his advances. However, Georgie had rejected him with violence and this humiliation had severely wounded his "emotionally adolescent" pride. And this rejection probably prompted him to part Philip and Georgie by ruining them.

Knollis not only suspects that he had a hand in their recent misfortunes, but also had murder in his heart and the only thing that had stopped him was getting murdered. But who had put him in the well? 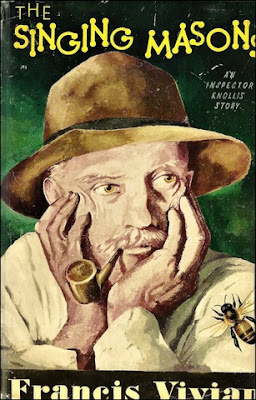 I've only read two of Vivian's detective novels, The Singing Masons and The Elusive Bowman, but he appears to have been fond of the detective story format Agatha Christie employed in Cards on the Table (1936). There are only a couple of suspects with closely-linked motives, but everything is complicated by their movements, false or incomplete statements and their alibis. One alibi, in particular, deserves to be spotlighted: a suspect claims to have been at the cinema to attend a screening of Robert Montgomery's film adaption of Raymond Chandler's The Lady in the Lake (1943), but Knollis destroys this alibi with the help of a movie review from a magazine. I believe Christopher Bush, an alibi artisan who tried to emulate the hardboiled style (e.g. The Case of the Amateur Actor, 1955), would certainly have appreciated this little alibi-trick.

Then there are the bee-themed clues and red herrings, such as a dead bee in victim's apartment or where the hive in the orchard came from and who took it away after the murder, but, most fascinatingly, are the long-abandoned queen-rearing apiaries hidden in the woods – which used to belong to Batley's father. And these deserted hives have their own role to play in the tragedy.

A seasoned mystery reader will probably instinctively glance at the murderer, but this will only give you an incomplete solution. Even with the tight circle of suspects, Vivian forces the reader to hesitate between suspects and consider alternative explanations or combinations. So this makes The Singing Masons a more successful detective story than The Elusive Bowman, which is helped by the fact that Knollis came across here as far more rounded-character and has, as Curt aptly described it, "an unexpectedly hard-hitting conclusion." A genuinely sad ending punctuated by Knollis grimly telling Wilson, "I'm not God."

The Singing Masons is an absolute honey of a detective story and precisely what I needed after my previous disappointing reads. A highly recommendable mystery that should be your first stop in the series.
Geplaatst door TomCat on 9/25/2018