The locked room mystery and impossible crime story comes in many different shapes and forms, opening the door to endless possibilities and variations to kill, or disappear, people under circumstances that can only be described as miraculous – whether the victims were in a sealed room, closely guarded or in an open space. And then there are the miscellaneous impossibilities such as levitation, phantom fingerprints, predictive dreams and the physical alibi. So the possibilities really are endless and mystery writers have been tinkering with it ever since Edgar Allan Poe wrote "The Murders in the Rue Morgue" in 1841. 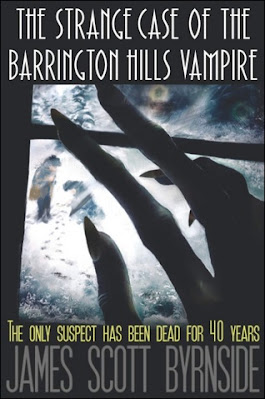 There is, however, one type of impossible crime that appears to be incredibly restrictive without much room for innovation or originality. I'm talking about the no-footprints scenario.

John Dickson Carr's name is synonymous with the locked room and impossible crime story, but even the master himself only produced two really good and original no-footprints novels, The Hollow Man (1935) and She Died a Lady (1943) – latter published as by "Carter Dickson." If you look at what other mystery writers have written, there are no more than a dozen novels and short stories that stand out as inspired and original. Some examples that come to mind are Hake Talbot's Rim of the Pit (1944), Norman Berrow's The Footprints of Satan (1950), Douglas Ashe's The Longstreet Legacy (1951), David Renwick's Jonathan Creek episode The Black Canary (1998) and two masterly done short stories, Robert Arthur's "The Glass Bridge" (1957) and Arthur Porges' "No Killer Has Wings" (1960). Japan also produced some fine examples (e.g. Gosho Aoyama's "The Magic Lovers Case") and recently Paul Halter came up with a creative variation on the no-footprints scenario in La montre en or (The Gold Watch, 2019). This short list of notable titles is why I've come to regard the no-footprints scenario as the most challenging and tricky impossible crime to tackle. A puzzle for experts.

So I was excited when the prodigy child of the Renaissance Era, James Scott Byrnside, announced his third novel featuring a killer who can apparently walk through walls and doesn't leave any footprints in the snow!

The Strange Case of the Barrington Hills Vampire (2020) is a prequel to Goodnight Irene (2018) and The Opening Night Murders (2019), set in November, 1920, which takes Rowan Manory and Walter Williams, Chicago's finest, to Barrington Hills – located "deep within the recesses of untamed Illinois." Thomas Browning, a rich railway magnate, wants a reputable private detective to debunk a psychic, Madame Cuchla, who has convinced his business partner, Hadd Mades, that turning Barrington Hills in a resort town is a bad idea. Madame Cuchla claims the region is haunted by one of the town's most notorious past residents, Otto Savore. Someone believed by the locals to be a vampire who, in 1875, allegedly killed more than fifty people in a single night with "none of the doors or windows of his victims were trespassed" and "no footprints in the snow." So, quite naturally, the townspeople buried him alive and "no grass ever grows on the vampire's grave." Madame Cuchla warns that death will come if the ground is ever build on.

Manory tells Browning that "any number of Chicago-River gumshoes could explain" the parlor tricks employed by psychics for a third of his price, but Browning wants a reputable detective to convince Mades. Manory certainly delivers the goods as he not only explains Madame Cuchla psychic reading of Williams, ghostly knocking and a floating face that vanished in a puff of smoke, but also gives a solution to the vampiric bloodbath from forty-five years ago. So the opening alone is good enough to be added to the list of debunked séance mysteries, but the problems that follow are of a less conventional nature. And they're all "damned impossible."

Early next morning, Mades returns to the remote house, hammering on the front door and yelling blue murder, because the vampire is in the house and Browning is in grave danger. Mades shows Manory the developed photographs that were taken of the house the previous days and one of them shows a grotesque-looking creature standing outside the balcony door, "sharp nails were touching the glass," as if trying to enter. But how did the vampire get on the balcony? There's no way to reach the balcony from the outside and the freezing cold makes it unlikely someone was waiting on the balcony for the right moment to photobomb without being seen. So that's the first impossibility stumping Manory, but "an agonizing scream" quickly announces a second one.

Thomas Browning's body is found in the garage with a twisted spine, broken bones, a slash across his right wrist and two bleeding puncture marks in his neck, but how had the murderer entered, or exited, the garage – only footprints going from the kitchen door to the garage belong to Browning. Another set of footprints goes from the kitchen door into the direction of the forest. A third and fourth set of footprints go from the garage window and back into the forest. Finally, two footprints are found next to the skylight on the garage roof, but none of them explained how Browning could have been attacked and killed. The Strange Case of the Barrington Hills Vampire is brimming with impossible material. There's a past murder case in which severed hands were left in the bedroom of a locked house and a second murder is committed inside a locked bedroom while Manory was sitting guard in the corridor. However, the story should not be judged solely as an impossible crime novel.

The Strange Case of the Barrington Hills Vampire has a small pool of suspects comprising of Browning's much younger wife, Madelaine, who sleepwalks and the reason why they have a live-in specialist, Dr. Sinclair. A daughter from a first marriage, Gertrude, who used to be married with a socialist associated with a band of hardliners, but he was "suicided" in a jail cell. She had not been on speaking terms with her father until he summoned her back home with the promise of a surprise. Howard Amorartis is a writer of supernatural horror and hopes his name will one day be as well-known as Poe, but now he has been commissioned to pen Browning's biography. Belby is the butler-chauffeur who's "not intelligent enough to devise a murder plan," but perhaps "subservient enough to carry one out." And there's always Browning's frightened business partner, Mades.

I think The Strange Case of the Barrington Hills Vampire is actually more accomplished as a whodunit than as a locked room mystery with a murderer who was hiding in plain sight (always satisfying) who had an original motive to engineer a whole series of otherworldly crimes. Just like in previous novels, the plot resembles a Matryoshka doll with multiple, interconnected problems that not only includes a plethora of impossible crimes and elusive murderer, but a dying message that had to be violently pried from the victim's clenched fist or why the murderer had no option to sever the hands of the second victim – a kind of corpse puzzle you normally only come across in Japanese shin honkaku detective stories. Add to this the excellent clueing, the characterization of the two bantering detectives and all of the various, moving plot-strands grasped in an iron-clad grip demonstrating why Byrnside might very well turn out to be the herald of a Second Golden Age.

But what about the impossibilities? Can they stand toe-to-toe with the ten no-footprints novels and short stories mentioned above? Yes... and no. The plot is crammed with the impossible crimes, but quantity doesn't always mean quality and only two of them are good.

Firstly, while the murder in the snow surrounded garage didn't came up with a new footprint-trick, everything else about this tricky murder made it an excellent impossibility with a good explanation why the witness at the window saw him fight with an invisible entity. Honestly, the whole situation that brought about this murder was quite clever and something that would have gotten the approval of Carr. Secondly, the murder in the locked and guarded bedroom has a routine solution, where the locked door and guard are concerned, but Byrnside succeeded in making one of my biggest no-noes perfectly acceptable and logical. And then there's the reason why the murderer had to cut off the hands. Unfortunately, the explanations to the past case with the severed hands that were left in a locked house or how the vampire was able to reach the balcony were underwhelming.

Nevertheless, when the plot resembles a nesting doll and practically everything is done correctly, the less than impressive explanations to two of the impossibilities is a blow the story can easily absorb without any damage to the overall plot. Byrnside continued to be awesome with how he handled the ending. Chapter 17 is a Challenge to the Reader asking eight questions that have to be answered before the case can be considered solved. Manory gives his explanation of the case at the annual dinner of the Detectives Club and there's a Rival Detective in attendance, Miss Genevieve Pond, who plays armchair detective and tries to deduce the solution before Manory gives it. I suspect she'll either become Manory's love interest in a future novel or become an antagonist when Byrnside decides to tackle the inverted detective story with an impossible, but it's probably the former. After all, Manory needs someone to bounce off on. They're polar opposites, is what I mean.

So, a long, rambling story short, Byrnside performed the hat trick with three back-to-back gems of the Western-style, neo-orthodox detective novel covering various styles and subgenres. All three are historical mysteries written in the typical, hardboiled style of the American pulps, but plotted and clued like a traditional, Golden Age detective stories filled with locked rooms, dying messages and bizarre murders – which all pay subtly homage to some of the greats of that bygone era. Goodnight Irene was an ambitious debut and The Opening Night Murders showed prodigious improvement with its labyrinthine plot, which can also be read as the two of the longest fan letters everyone has ever written to Christianna Brand. Byrnside moved away from using Brand as a foundation stone for his work and the result is The Strange Case of the Barrington Hills Vampire is a fully realized, modern incarnation of the classic detective story that can stand on its own. One of the bright lights of 2020 and all three come highly recommended.

On a final note: sorry for the flurry of 2020 reviews, but had to rearrange some posts and cram them all in here.