The Longstreet Legacy (1951) by Douglas Ashe

John Franklin Bardin was an American crime writer best remembered today as the author of three early psychological thrillers, whose admirers were as diverse as Edmund Crispin and Julian Symons, but, under the name "Gregory Tree," he produced two courtroom dramas and an impossible crime novel, A Shroud for Grandmama (1951) – which comes with all the trappings of a gloomy, old-fashioned Gothic romance. A Shroud for Grandmama was reprinted under yet another penname, namely "Douglas Ashe," as The Longstreet Legacy. 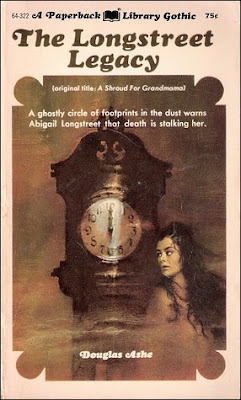 Back in 2014, John Norris, of Pretty Sinister Books, posted a review on his blog calling A Shroud for Grandmama "a lively and entertaining detective" with a fantastic and engaging narrator, but warned that it "is somewhat scarce in either hardcover or paperback." So the book lingered on my wishlist, like an earthbound spirit, when recently, I lucked upon an inexpensive, well-worn copy.

Miss Abigail Longstreet is a young, beautiful woman in her late twenties, but speaks and dresses as a woman from the turn-of-the-century. Abigail preferred "the joys of introspection and the lady arts" to the people of her own age and the modern world, which she deemed as "vulgar and footling." This meant she lived quite a solitary existence, but not to the same extent as her eccentric grandmother, Ella Longstreet, who lives like a hermit in a dark, imposing New York mansion – where she has denied the existence of the outside world for the past fifteen years. Abigail is the only line of communication between her grandmother and their greedy relatives who are always in need of money. And this is why she's the only one of the family who knows that Ella is completely blind.

So, naturally, she was quite perplexed when a man, Arthur Crump, turned up on her doorstep with a crumpled note, saying "come in haste," with her grandmother's engraved wedding wrapped inside. Crump tells her the package had struck his head in the streets and thinks it had been thrown at him from an upstairs window, which could mean that her grandmother is in trouble. Nothing could have prepared Abigail for what she found when crossing the threshold of the great house where she had spent her girlhood.

Ella Longstreet's emaciated, nearly naked body, scantily dressed in "one of those scandalous swimming suits," a bikini, lying at the bottom of the staircase on the dust covered parquetry of the long, two-storied hallway, but the body is surrounded by "a circle of waltzing footprints" – as if "someone had gone round it" in "a frenzied haste." Inexplicably, there were no other footprints going to, or leaving, the circle on the thick layer of dust carpeting the hallway! Abigail does exactly what her grandmother would have wanted, avoiding a scandal, by destroying the evidence and carrying her grandmother's body to her bedroom to put some decent clothes on her to face the undertaker. However, she discovers that the closet is empty with the exception of a stiff, grim-looking funeral shroud!

Shortly after Abigail finished tidying up the crime scene, the doorbell pealed and she found Deputy Chief Inspector Stephen Eliot standing on the doorstep. 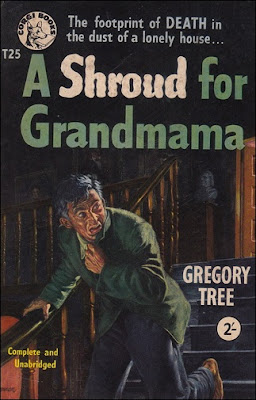 According to Eliot, there are more than a thousand known recluses, on all levels of society, in the jurisdiction of Manhattan and Ella Longstreet was "the wealthiest and most notorious." A nominal supervision is kept of all of them, wherever possible. Abigail learns from Eliot that the house of her grandmother resembled a busy thoroughfare on the day of her dead, which attracted the attention of the beat cops.

Apparently, the whole family visited Ella that day with a written invitation in hand that also contained references to the notorious family ghost, Sybil. A poltergeist with an undying love for dancing and pelting people with objects.

An utterly bizarre and impossible problem, but Eliot is a sharp, tricky customer who loves to set out verbal traps and somewhat reminded me of Lt. Columbo. His questioning of the family is illuminating to both Abigail and the reader. Abigail comes to see many of her relatives in a different light and learns more about herself than she would have been comfortable with in the first chapter, but these interviews also provide the reader with pieces of the puzzle, which gives answers to some of the more outre aspects of the case – such as why the body was dressed in a bikini. Slowly, but surely, a picture begins to emerge of the truth and the keen-eyed reader will be able to fill-in the blank spaces, but beware the slippery red herring. Because your ego can break its neck when you slip on the neatly positioned red herrings in this story! Yeah, I sort of Roger Sheringhamed it.

But, for me, the absolute highlight of The Longstreet Legacy was not the who, or why, but how the murderer was able to place the body in a circle of footprints without disturbing the dust that covered the rest of the floor. A fantastic and entirely new solution to the no-footprints problem. However, while the solution is entirely original, you can easily see which well-known impossible crime novel gave Bardin the idea, which is to his credit, because I would have never thought of using it like that in a million years!

So, on this count alone, The Longstreet Legacy comes highly recommended to fans of the impossible crime story and particularly those fans with a special affinity for the no-footprints puzzle.

The Longstreet Legacy is an excellent throwback, or homage, to the turn-of-the-century Gothic tale, full of dark, long-held secrets, a ghost and family skeletons, but told with a traditional slant on it and a great detective who cuts through the web of lies and deceit. Honestly, my only complaint is how fast I burned through the pages of this immensely enjoyable detective yarn and I'm baffled that it has been out-of-print for so many decades. It deserves to be reprinted. But, in the mean time, I recommend you keep an eye out for an affordable, secondhand copy, because you want to have this one in your collection.
Geplaatst door TomCat on 4/27/2020