In my previous posts, I reviewed the only two Sheriff Joe Bain novels John Holbrook Vance completed, The Fox Valley Murders (1966) and The Pleasant Grove Murders (1967), which were excellent, but this only left me with third, partially finished and unpolished manuscript of the third novel, "The Genesee Slough Murders" (1966) – a novella-length plot outline eventually published in The Work of Jack Vance (1994) and The Joe Bain Mysteries (2013). Photocopies of the typescript draft had circulated among collectors for many years. 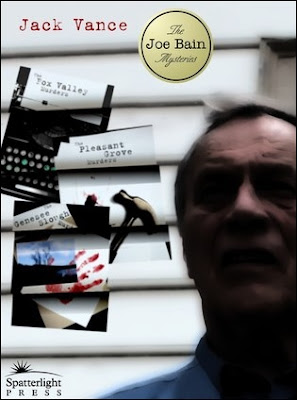 I expected the manuscript to be similar to the outline of Ellery Queen's unfinished novel, collected in The Tragedy of Errors (1999), but "The Genesee Slough Murders" is not as detailed and much more of bare bones outline. But the whole plot is there. Frustratingly, if it had been finished, it would probably have been the best of three Sheriff Joe Bain novels!

The Fox Valley Murders was a detective story about the people of San Rodrigo County, while The Pleasant Grove Murders focuses on the suspects living along Madrone Way, but "The Genesee Slough Murders" would have dealt with literal, tree hugging hippies – descending on the county to protect the trees growing on the levees. A conflict that would have provided the backdrop for "The Genesee Slough Murders."

The line of division between land and water, "namely the levees," have become "a cause of bitter conflict." The trees growing on there weaken the levees with their roots and, in order to protect the waterways, they have begun to remove the trees, but protesters have gathered along Genesee Slough "to prevent any further stripping of the levees." Sheriff Bain is observing the protest in the second chapter, but takes a very hands-off approach when it comes to policing the protest. Very much to the annoyance of his long-time nemesis, Howard Griselda, who runs the local newspaper. Griselda would like to see nothing more than Bain getting replaced by a modern, efficient and progressive sheriff.

Vance fleshed out some parts, here and there, but mostly it's a rough outline of how the story is going to progress with its main plot-line, side stories and characters.

Bain deftly solves a home burglary and the way in which he resolved the issue showed Griselda had a point when he labeled the sheriff an ethical relativist in a previous novel. Not necessarily a bad thing when trying to resolve problems in a small, tight-knit community. There's also a hit-and-run accident, mysterious phone calls to his daughter and "a grisly discovery" is made when the low tide revealed a sunken car in the slough with two bodies inside – a young woman and a baby. Two days later, three people are gunned down in a single night with bullets fired from the same gun!

Vance gives a very brief, bare bone outline of the solution, but the idea behind the murders is really clever and you can see how well it would have worked had it been presented as a completed detective story. I have to stress that the motive for the three murders, more important here than normally, is so original that I know of only one other detective story that used it. One of the anime-and manga detective series used a nearly identical plot and motive for one its stories, but can't tell you any more than that without giving anything away.

Even if "The Genesee Slough Murders" is only a scantily dressed plot outline, I think it's still worth reading, if only to see how the sausage is made.

So, after having read two novels and an unfinished manuscript, I'm left wondering why Vance abandoned the series, because, had he continued writing mystery novels, he would have become one of the top-tier writers of the post-GAD era. And perhaps the one who could have lit the flame of a Silver Age. Luckily, I still have The Four Johns (1964) and The Madman Theory (1966) that he wrote as Ellery Queen on the big pile, but next up, is a return to the Golden Age with a truly obscure title. So stay tuned!
Geplaatst door TomCat on 4/17/2020