So, after finishing Colin Robertson's Demons' Moon (1951), I intended to take a short break from the impossible crime story and was off to a good start with Moray Dalton's The Art School Murders (1943), but Hampton Stone's The Corpse Who Had Too Many Friends (1953) soiled my promise with the inclusion of a (minor) locked room problem – giving me a paper thin excuse to dip into one more impossible crime novel. A cross between Agatha Christie's Murder is Easy (1939) and Herbert Brean's Wilders Walks Away (1948) with no less than four impossibilities listed in Brian Skupin's Locked Room Murders: Supplement (2019). How can you see no to that? 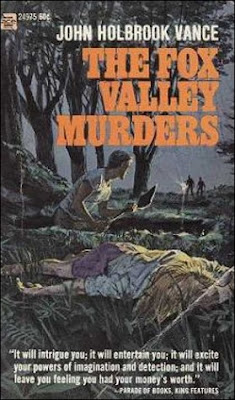 John Holbrook Vance is better known as Jack Vance, a well-known, celebrated fantasy and science-fiction author, who occasionally turned to the detective and thriller story. Vance even ghosted three of the late period Ellery Queen novels, The Four Johns (1964), A Room to Die In (1965) and The Madman Theory (1966).

During the same period, Vance wrote two mystery novels about Sheriff Joe Bain, The Fox Valley Murders (1966) and The Pleasant Grove Murders (1967), which take place in the old-world surroundings of San Rodrigo County, California. Vance had been working on a third novel, The Genesee Slough Murders, but left the book unfinished and photocopies of a typescript draft have "circulated among collectors for years" that outlined the entire story with some near complete chapters – lacking only "a final polish." The manuscript outline was published in The Joe Bain Mysteries (2013).

Joe Bain used to be "the tall hell-raising lad from Castle Mountain," a run-a-way kid who came to San Rodrigo County, "where he consorted with Mexicans and fruit tramps." An unlikely boy to eventually become sheriff, but a broken marriage left him with a daughter to support and used his G.I. benefits to attend classics at the Chapman Institute of Criminology, which landed him a job as deputy-sheriff under Sheriff Ernest Cucchinello.

The Fox Valley Murders opens two days after the untimely passing of Sheriff Cucchinello and Bain was appointed to serve out the last months of his term as Acting-Sheriff. Bain is planning to the challenge the odds-on favorite, Lee Gervase, who's "a vigorous and progressive young lawyer" predicted to "sweep unopposed into office" in the next election. This election is one of three, closely intertwined, plot-threads that run through the story. A plot-thread that sees Bain trying to drum up support in the community and cleaning out the office of any petty, small-town corruption.

The second plot-thread is the hostile response of the community to the return of one of its most notorious and hated inhabitants, Ausley Wyett. Sixteen years ago, Wyett had been found digging a hole "with close at hand the body of Tissie McAllister." A young schoolgirl who had been brutally abused and murdered. Wyett protested his innocence, but there were five witnesses whose testimonies showed only he could have killed the girl and was sentenced to life imprisonment – narrowly avoiding the death penalty. A month ago, Wyett was paroled out of San Quentin and returned to the home farm, which already unsettled the locals, but then he begins sending letters around. 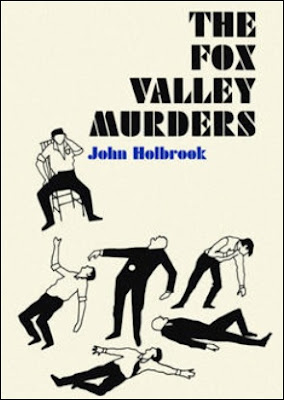 All of the witnesses receive a letter with the question, "how do you plan to make this up to me?" When the witnesses begin to die, one by one, Bain begins to fear he might soon find Wyett "swinging from a tree."

Finally, we come to the meat of the plot! A series of suspiciously-looking accidents and natural causes that befall the witnesses who testified against Wyett.

A former school bus driver, Bus Hacker, died in front of Bain when he had a heart attack on his front porch. Charly Blankenship, "a well-known mushroom fancier," inexplicably picked, cooked and consumed an easily recognizable, poisonous mushrooms. Willis Neff apparently died in a hunting accident in an open glade high in the Santa Lucia Mountains, of Monterey County, where a witness would turn the shooting accident in an open-air locked room mystery in case of murder. Oliver Viera was all alone when he fell sixty feet to his death from a ladder perched too close to a ravine. A bizarre string of suspicious accidents and deaths, but, as Bain remarked, "you feel a fool saying accident" and "you feel a fool claiming foul play."

I think the poisoning-trick and the hunting accident are more accurately described as borderline impossible crimes, but appreciated the variety and two of the murders showed some ingenuity.

The murder of Bus Hacker is a genuine impossible crime with a good solution, but you should be able to (roughly) work out how it was done and the explanation for the dish of poisoned mushrooms, while not strictly an impossibility, was something completely new – furnished the plot with an important clue. Technically, you can call the hunting accident an open-air locked room murder, but the trick should have been used in another story to give a murderer one of those hard-to-break alibis. The deadly fall from the ladder has, sadly, the most simplistic solution imaginable. But when you pull them together, you have a very satisfying and original take on the impossible crime and perfect murder tropes with a memorable, vividly-drawn backdrop and characters. 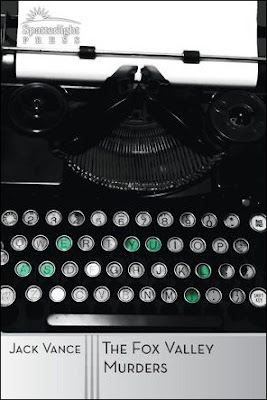 I've already compared The Fox Valley Murders to Christie's Murder is Easy and Brean's Wilders Walk Away, which is an accurate comparison when describing the bare bones of the plot, but the story is dressed in thick slices of small-town Americana. You have the small-town politics of Erle Stanley Gardner's Doug Selby series (c.f. The D.A. Draws a Circle, 1939), the hum of every day, small-town life that filled Theodore Roscoe's crime novelettes in The Argosy Library: Four Corner, vol. 1 (2015) and a populace that begins to feel deprived of justice. Although the threat of an old-fashioned lynching is not as imminent here as it was in Queen's The Glass Village (1954). A skillful, wonderfully done combination of characters, plot and setting that made The Fox Valley Murders a beautifully written and constructed detective story. And one of the better locked room mysteries from the 1960s era.

There is, however, a flaw in this little gem. A big, important chunk of the plot is driven by Wyett's illogical, mule-headed stubbornness and actions, which began when he found McAllister's body in his barn and tried to bury it. Something that is never satisfactory explained beyond that he lost his head when he found the body. What he did when he was paroled became convenient smokescreen for the murderer. Wyett acts as a plot-device to drive certain parts of the story and it stands out here, because everything else feels so natural. A second thing that kept nagging at me is Wyett continuously saying he was completely innocent when he didn't report a murder, destroyed the crime scene and tried to bury the body – three counts that, knowing Americans, probably adds up to a pretty stiff prison sentence. A small blemish on an otherwise excellent detective novel, but more of an annoyance than a serious drawback.

So, all in all, The Fox Valley Murders stands as a fascinating, well-written detective novel with a slightly unusual plot and beautifully evoked, pleasantly busy setting that brought the place alive in all its facets and complexities. Not everything is absolutely perfect, but, reading the book, you wouldn't think the genre's Golden Age had ended. You can expect one of my ramblings on The Pleasant Grove Murders and The Genesee Slough Murders before too long!
Geplaatst door TomCat on 4/10/2020