Last year, Dean Street Press reissued five novels by the then forgotten mystery novelist Katherine M. Renoir, who wrote twenty-nine detective novels as "Moray Dalton," which our resident genre-historian and blogger, Curt Evans, described as "the finest British crime fiction" of the mid-century period – originally published between 1929 and 1951. I thought The Strange Case of Harriet Hale (1936) was overpraised, but The Night of Fear (1931) and Death in the Cup (1932) were good examples of the sophisticated, character-driven mystery novel closely associated with the Crime Queens. 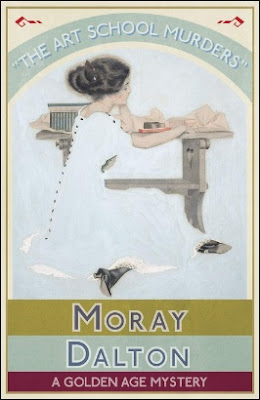 So it was encouraging to see these new editions were successful enough to bring more of Dalton's long out-of-print, nigh forgotten mystery novels back in print. DSP reissued five further titles in March and, while The Black Death (1934) was not reprinted, the line-up still looked promising!

The Art School Murders (1943) is erroneously listed online as a non-series novel, but Evans reckons it's the tenth title in the Inspector Hugh Collier series. A mystery novel tantalizingly combining three popular mise-en-scènes of the Golden Age detective story: murder at a school for artists during the blacked-out nights of the Blitz.

Aldo Morosini is a well-known, celebrated Italian artist who founded the Morosini School of Art with the lofty dreams of discoursing through its hallways "surrounded by an adoring crowd of students," but the eager, hard-working students were unable to "feed his hungry vanity" and the school ceased to amuse him – still "a paying proposition." So he now only comes around at the end of each term to decide who's to be promoted to the life class and has left the teaching in the hands of two staff masters, John Kent and Mr. Hollis. Not surprisingly, the overly expensive art school is dying a slow death with more students leaving than enrolling. War isn't exactly helping, either. Nor is the presence of a femme fatale.

Miss Althea Greville used to be the favorite model of "a big noise in the art world" and went to pieces when he died, but she retained enough of her beauty and allure to continue working as an artistic model. A year previously, Miss Greville was engaged as a model at the school and turned the heads of many of the male students ("you'd never credit the harm a woman like that can do in three weeks"). At the time, one of the masters had pegged her as "potentially dangerous," but she was allowed to come back when another model canceled and this gig ended with the discovery of her blood drenched body behind the screen in the life classroom!

The local police is confronted with "a formidable list of suspects," forty-five students, two masters, one secretary and the caretaker, who all had access to the school and could have been there at the time of murder without attracting any attention – which is quite a departure from all the locked room mysteries of late. So they decide to immediately call in Scotland Yard, but, before Inspector Hugh Collier really can get to work, a second murder is reported!

One of the students, Betty Hayden, is an avid moviegoer who regularly patronized "a small picture-house," the Corona, catering to people "who would rather see a good old film than a poor one fresh from the Hollywood mint." She always sat all the way in back, on the balcony, which is where her body is found. Someone had stabbed her silently, in the dark, while Fred Astaire was singing on the screen. Betty had been hinting that she had seen someone lurking around who shouldn't have been there. 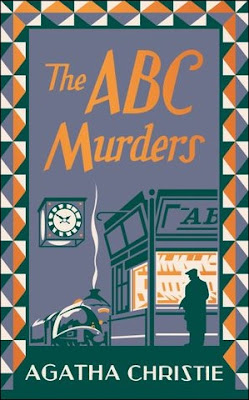 Usually, these so-called "emergency murders" of pesky witnesses or people who simply know too much add very little to the plot, or story-telling, except to help tighten the noose around the murderer's neck. But that was not entirely the case here.

This second murder places Betty's school friend, Cherry Garth, in possible danger, because the murderer might be under the assumption that Betty shared her secret with Cherry. So this second murder actually furthered the plot and story-telling, but just as interesting was the scene of the crime. Surprisingly, I can only name six detective novels and one short story that use a darkened cinema as a stage for murder and have only read four of them. You have Rex Hardinge's very obscure short story, "The Cinema Murder Mystery" (1927). P.R. Shore's extremely obscure The Death Film (1932). One of the victim's in Agatha Christie's The ABC Murders (1936) is stabbed inside a movie theater and Gerald Verner's The Whispering Woman (1949) is on my to-be-read pile. John Russell Fearn's One Remained Seated (1946) and Pattern of Murder (2006) made the best use of the cinema setting.

If you cheat a little, you can add E.R. Punshon's Death of a Beauty Queen (1935) and Stuart Palmer's "The Riddle of the Whirling Lights" (Hildegarde Withers: Uncollected Riddles, 2002), but Dalton's The Art School Murders is a genuine, if unusual, addition to the list – using the setting more as a psychological clue rather than a convenient place to silently knife someone. The murderer is someone with "an unusual degree of callousness" and this murder showed it.

Collier whittled down the list with fifty potential suspects down to five, which is mostly done by interviewing suspects and witnesses. Brad, of Ah, Sweet Mystery, calls this approach "dragging-the-marsh," in honor of Ngaio Marsh, which can bog down a story. Once again, that was not the case here as the story never flagged, but all of the clues and hints were hidden in the statements and movements of the characters. This has always been a precarious way to clue a detective story to the full satisfaction of pesky armchair detective, but it can be done and the opportunity was present here. Only problem is that this particular murderer needed more, stronger clueing to have been an good, effective surprise. Now it felt like a wombat being pulled out of top hat. You'll understand why when you read it.

The Art School Murders is not as good as The Night of Fear, or Death in the Cup, but certainly better than The Strange Case of Harriet Hale with a plot that made interesting use of the second murder, cinema setting and the nighttime black-outs – seriously hampering the police in keeping "tabs on anyone after dark." Recommended to mystery readers with a special affinity for the (uncrowned) Queens of Crime.
Geplaatst door TomCat on 4/02/2020