Last month, I reviewed Brought to Light (1954) by E.R. Punshon, a late entry in the series, which saw Bobby Owen at the tail-end of his career when he had reached the rank of Deputy Commander of the Metropolitan Police. The story was excellent, full of zest and vitality, but ended my post with commenting that I preferred the early period novels when Owen was a young, fresh-faced policeman moving through the ranks – traveling the British countryside on his motorcycle. So I decided to return to one of the earlier novels when Owen was still working under the guidance of Superintendent Mitchell of Scotland Yard. 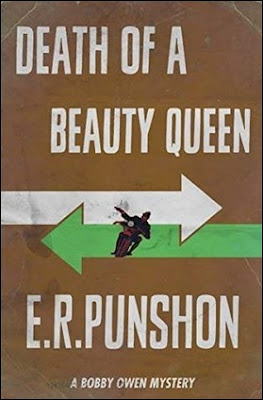 Death of a Beauty Queen (1935) is the fifth novel in the Bobby Owen series and begins with a beauty contest in the Brush Hill Central Cinema, organized by Mr. Sargent, who's the manager of the cinema.

Before I go on, a brief aside on the setting of the story: last year, I wondered in my review of John Russell Fearn's One Remained Seated (1946) how many detective novels or short stories had a cinema as setting, because it looks as if they are few and far between – only P.R. Shore's The Death Film (1932) and Fearn's Pattern of Murder (2006) came to mind. Now we can add Punshon's Death of a Beauty Queen to the list. Even if the cinema was only used here as the stage for a beauty contest.

The dead-on favorite to win the contest is Miss Caroline Mears, "a veritable goddess of old Grecian dream," whose only flaw are her hard, blue eyes, but her overall beauty silenced the dense crowd for a minute before bursting into applause. Before she can be announced as the winner, Mears is found fatally wounded in her private dressing room and is rushed to the hospital. Where she died upon arrival.

Superintended Mitchell and Sergeant Bobby Owen quickly come to the conclusion that there were several people in the "regular pandemonium" backstage with a potential motive for murder. Mears played a dirty trick on one of the contestants, Lilian Ellis, which effectively ruined any chance she might have had. Ellis had been promised a job as permanent mannequin at the Brush Hill Bon Marche, if she met with any success, but Mears spoiled those plans. And she was known to have a temper. Mr. Sargeant has been flanked the whole evening by Paul Irwin, an influential member of the borough council and a hard-line Puritan, who's only son, Leslie, is sweet on Mears and wants to marry her – much against his wishes. They discover Leslie in Mears' dressing room and he flees. Shortly after the murder, a man arrives at the cinema, named Claude Maddox, introducing himself to Mitchell and Owen as the fiance of Mears.

And then there are such complications as to what happened to the victim's handbag, who was the "tough looking bloke" looking for one Carrie Quin and why was the murder weapon traced back to the door-keeper, Wood.

So the premise is fairly standard affair: a body surrounded by a small circle of suspects supplied with motives and opportunity. Unfortunately, this is the only problem and the story lacked the labyrinth of plot-threads characteristic of Punshon's work, which made this one of his unusual slender detective stories – much like It Might Lead Anywhere (1946). It didn't help that the murderer was incredibly easy to spot. 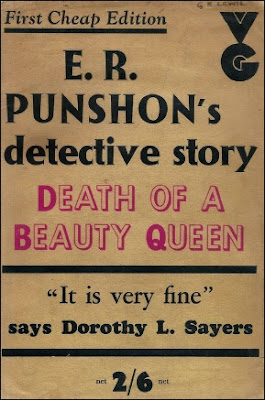 Nevertheless, it was, always a well written story and the last half sprung a pleasant surprise on me when it introduced two, (quasi) impossible situations. Firstly, a suspect escapes from the police, in bare feet and pajamas, but, unlikely as it may seem, this person appears to have vanished into thin air. Successfully eluding the posse of constables. This much amuses the British press and the world-wide community who reported and speculated wildly on the matter. Several prominent Nazis in Germany expressed their believe that "the Jews were at the bottom of the whole thing," while French newspapers dispatched special correspondents "to report on this strange manifestation of 'l'hysterie Anglaise.'" A fun little side distraction in the story.

A second, full-blown locked room mystery is introduced in the last three chapters of the book when a murder is committed in a cottage under police observation, back and front, but the only other person on the premise was a maid – who obviously is not the murder. The locked room trick also explains the unlikely escape of the bare-footed suspect, but these closely linked impossibilities are slightly marred by the fact that the ancient solution was cribbed from Conan Doyle. And not clued at all. So, while I appreciate to find two impossible crimes in a book not listed in Locked Room Murders (1991), I could have done without them. You see, I picked Punshon to smear out my locked room reading and have a bit of variation. What does Punshon do? He springs not one, but two, on me. I should have gone with The Dusky Hour (1937) or Suspects – Nine (1939). Oh, well.

All in all, Death of a Beauty Queen is a mixed bag of tricks. It was good to see Owen back at the side of Mitchell and him playing a secondary role suddenly reminded me of those written by Christopher Bush, in which Ludovic Travers plays the shadow of Superintend George Wharton. The book was as well written and characterized as any of Punshon's best detective novels, but the plot was unable to sustain itself pass its strong opening. On a whole, not too bad, but Punshon has written better.

Well, I was planning to take a short break from the locked room mystery and spread them out a bit, but now that Punshon has ruined that, I'm going to return to Fearn for my next read. Hey, I have to moral compass of a heroin addict when it comes to impossible crime fiction. Why wouldn't I use kindly Mr. Punshon as an excuse to indulge in my locked room vice. I would sell your children's soul to the devil to get back the lost manuscripts of Hake Talbot and Joseph Commings. :)
Geplaatst door TomCat on 8/23/2018