Paul Doherty's The Godless Man (2002) is the second entry in the Telamon Triology, bookended by The House of Death (2001) and The Gates of Hell (2003), which tracks the ordeals of a talented physician, named Telamon, who acts as one of the "most trusted counselors and confidants" of his childhood friend, Alexander the Great – who were both tutored as boys by Aristotle in the Groves of Mieza. Alexander has a personality and god-like ambitions that tend to be a test to the methodical, level-headed physician. 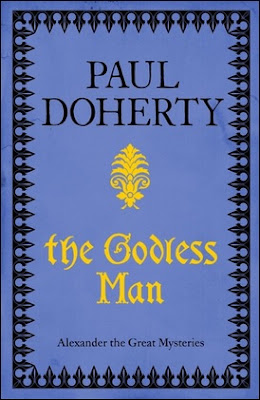 The Godless Man is set in 336 BC and Alexander has destroyed the Persian armies at the battle of Granicus, capturing city after city, but the hungry Lion of Macedon is on the prowl for a port. So he took the city of Ephesus. A Greek city rife with deep-seethed rivalries, political intrigue and bloodletting.

Ephesus was a vassal of the Persian Empire and the elites of the city, the Oligarchs, supported the Persians, but they faced in strong opposition in the Democrats and their feud is closely-linked to an apparently never-ending string of murders – basically ancient gang warfare. When the city falls to Alexander, the Democrats are given an opportunity to purge the Oligarchs. Men, women and children are dragged to the market square, tried and summary executed. The bodies are stacked high when Alexander puts a stop to the bloodletting, because he wants to leave a peaceful, unified city behind as he marches deeper into enemy territory. There is, however, a problem.

A group of mighty Oligarchs, lead by Demades, took refuge inside a fortified shrine, the Temple of Hercules. A holy sanctuary not even a lynch-mob dared to violate.

Alexander promised the Oligarchs that they were allowed to leave unscathed and "not a hair on their heads would be harmed," but the whole group, including a Macedonian guard, is massacred during their final night inside the shrine and evidence suggests most of the victims were trampled to death – as if a wild horse had entered the shrine and "stamped on each man as he lay asleep." Another body was blackened by fire and the last one appeared to have been scratched to death. However, the most baffling aspect of this veritable holocaust is that the shrine was only guarded by Alexander's soldiers, inside and out, but hermetically sealed.

The Temple of Hercules is an ancient and simple structure: a heavily beamed roof supported by columns on both sides with small windows that are high and narrow. The main entrance is sealed and guarded, while the rear door is bolted from the inside and sealed from the outside with Alexander's insignia in purple blobs of wax. So how could eight men be brutally murdered inside a sealed shrine that was ringed by soldiers?

However, this is not the only impossibility to occur inside the Temple of Hercules on the night of the murders.

The shrine housed a holy relic, a silver vase, which reputedly holds a earthenware jar containing some of the poison which killed Hercules. A poison known as Hydra's Blood. The silver vase is kept on a stone plinth, firmly rooted in a bed of concrete, protected by "a circular pit" of glowing charcoal and the heat from it's quite intense, but, when they entered the temple, the vase was taken from its plinth and moved to a dark recess of the temple – while the bed of charcoal was still glowing. So who and why moved the vase, but, more importantly, how did this person cross the circular pit. On the surface, this impossibility strongly resembles the problem of the stolen crown from A Murder in Thebes (1998), protected by a pit of red-hot charcoal, but The Godless Man had the better solution of the two. I think this was actually the best of the three locked room problems in this story. 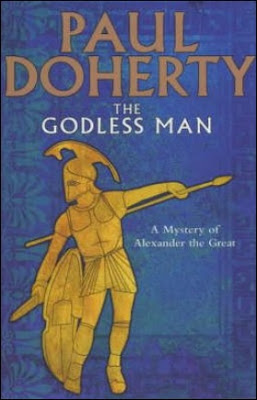 A third (impossible) murder occurs very late in the book, when a character apparently hanged himself in a bolted writing room with shuttered windows, but the explanation is pretty basic.

I don't believe the solution to the massacre inside the sealed temple will set any locked room enthusiast on fire, but the trick was better than I anticipated. I found the presence of a uniformed soldier among the victims incredibly suspicious and, when the dark recesses were mentioned, I began to suspect an extra person had been present in the shrine the whole time – clad in the tunic of a Macedonian soldier. This person simply blended in with the guards when they entered the temple to discover the massacre. However, the actual explanation turned out to be a little more involved and slightly more original than my initial idea. I really appreciate that in a locked room mystery.

As you can probably guess by now, this is only a fraction of the overall plot and bodycount. The slaughter of eight men at the temple is supposed to be the work of a Persian spy, The Centaur, who took his name from a society of Ephesian assassins, The Centaurs. The original group had been wiped out, but The Centaur took their bloody mantle and left behind a trail of blood in the city.

A well-known courtesan is murdered along with her porter, maid and a house-guest. An important witness is burned to death in his prison cell and then there's the previously mentioned locked room murder, which was staged as a suicide, but the story also had a sub-plot and involves a face from Alexander's past, Leonidas – an army veteran who loves to drink and dreamed of finding lost treasure. One day, Leonidas is found face down in the dirty pond of the House of Medusa. A gloomy, ghost-infested place of ill-repute. This plot-thread is resolved halfway through the story and the answer unearths yet another mass murder in Ephesus. Telamon is tasked by Alexander with piecing all these puzzles, within puzzles, together.

The Godless Man was far more focused on the plot than The House of Death, which was more of a historical thriller with an origin story, but, while the plot has some good (locked room) ideas, it did not entirely measure up as a proper, fair play detective story. A lack of proper clues made it look as if the murderer was picked at random and made for a slightly underwhelming revelation, but liked all of the impossible crime material. The impossible crimes are, unquestionably, the best bits of the plot. So, on a whole, this was still a good read. However, I can only really recommend it to long-time readers of Doherty and locked room enthusiasts.
Geplaatst door TomCat on 8/16/2018