Nancy Bodington was an English novelist who, under the penname of "Shelley Smith," wrote fifteen novels of crime, detection and suspense in "the malice domestic and "badass biddy" subgenres" – debuting with Background for Murder (1942) and ending with A Game of Consequences (1978). I likely would have remained ignorant of Smith's detective-fiction had it not been for Martin Edwards and John Norris regularly praising her work to the skies and back. 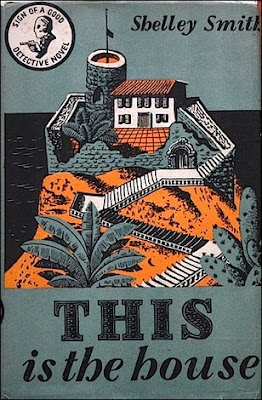 Edwards described Smith as "a writer of genuine ability and intelligence" and Norris has been "completely under the spell of this fine writer." They certainly aroused my curiosity with enticing reviews of Death Stalks a Lady (1945) and An Afternoon to Kill (1953), but, as to be expected with these two reviewers, the books they discuss tend to be hard to get by and Smith was no exception – until very recently, that is. Over the past two years, Endeavour Media reissued all of Smith's crime fiction as ebooks and can now be easily accessed by everyone.

So I decided to finally take a crack at one of her novels and picked one of her more traditionally-structured detective novels.

This is the House (1945) was described by Norris in his 2016 review as "a Carribean homage to the British claustrophobic village murder mystery" and the description of the plot struck me as Theodore Roscoe's Murder on the Way! (1935) as perceived by Christianna Brand. Well, I was not far off the mark!

The backdrop of the story is the most southerly island of the Windward Isles, Apostle Island, which has a dusty, ramshackle capital, Wigtown, that's overlooked by the titular house on the mountaintop – which is, strictly speaking, not a house. The place is nothing more than "a plain, square, two-storied villa" standing within the walls of an abandoned, 16th century Portuguese fortress. A fortress that had began to crumble into "a picturesque ruin," but Antoine Jacques, Premier Justice of Apostle Island, used the place as a foundation for his modern villa.

Jacques settled down in his fortified villa with his family, but tragedy struck when his wife, Julia, was struck by a crippling illness that left her almost completely paralyzed. Julia is a living, bedridden corpse who can barely move or speak and she wishes to die in order to end the suffering. A death wish that came true when a visitor came to the house.

Quentin Seal is a writer of "surprisingly intelligent" detective stories with a high reputation among "the more sober and scholarly fans" of the genre and has come to the island for a well-deserved holiday, but a friend has given him a letter of introduction to the Premier Justice of Apostle Island, Monsieur Jacques. Normally, Seal refused these banal entries in polite society, but the friend who gave him the letter promised his visit would be an interesting one and he was not wrong, because, when he climbed the seemingly endless steps leading up to the house, Seal makes an unsettling discovery – Julia lies dead in her room. On the surface, it appears Julia had been accidentally suffocated when the family cat had entered her room and had fallen asleep on her face.

However, the postmortem examination failed to find any cat hairs or fur in either the nose or mouth of the victim. So the doctor concludes Julia had simply died from a second stroke, which was to be expected, before the cat had entered her room and the jury entered a verdict of death by misadventure. An open-and-shut case, but, as Seal becomes involved with the Jacques family, he observes the ugly aftermath of Julia's death. An aftermath that turns out to be a prelude for a second, unmistakable murder. 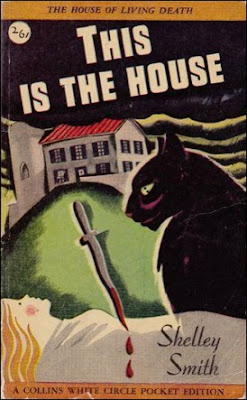 Raoul Jacques is the only child of Antoine and Julia, an 18-year-old Lothario, who's furious when he learns that his mother has left all of her money to the church and holds Father Xavier personally responsible – accusing him of having taken advantage of his position to worm his way into her will. Raoul is egged on and encouraged by his depraved aunt, Miss Hattie Brown, who believes in "wickedness for its own sake." Father Xavier suffers a lot of slings and arrows at the hands of these two devils. The relationship between aunt and nephew, especially after the death of Julia, becomes a bit creepy at times.

Then there are the people who live in the house or are, in some way, connected to the people who live there. Such as Miss Brown's secretive secretary, Prudence Whitaker, who develops an unusual relationship with a vagrant beachcomber, Boris Borodin. Lastly, you have the bailiff of the estate, John Foley, along with his gossipy wife, Evelyn.

One of these characters is fatally knifed in a usually unoccupied bathing-hut and is found, partially undressed, on a shabby, chintz-covered bunk-bed, which is very suggestive and the answer to this aspect of the plot was definitely very daring for the time – resulting in a sequence of events that would probably have shocked some readers at the time. This murder and its use of sex is what made Norris label the book as "one of the earliest transgressive detective novels." However, I remember a mystery novel from the 1930s that was as risque as this one and believe it was John Dickson Carr's The Four False Weapons (1937), but it might have just as easily been yet another novel from the thirties.

Seal is asked by the family to use his talent as a professional plotter to assist the local police in their investigation and the police on the island is represented in the figure of Brigadier Napoleon Orage, a black policeman, who must be a nod towards Arthur W. Upfield's half-aboriginal policeman, Detective-Inspector Napoleon "Bony" Bonaparte. I refuse to believe that the given name of the Brigadier is a mere coincidence. Anyway...

Seal plays his role as amateur detective to perfection and, towards the end, gathers all of the suspects in a room where, one by one, he begins to eliminate them before revealing the true identity of the murderer. I think this gradual process of elimination by showing why most of the suspects couldn't have committed the murders is a very satisfying way of lifting the veil. Particularly when the author has conceived a cunning plot with a cleverly positioned clues and misdirection, which was definitely the case here. All of the clues were present and the plot was very clever. The death of Julia Jacques turned out to be a canny, medical-based murder on par with the central murder from Brand's Green for Danger (1944) and part of the murderer's scheme reflected a certain the plot-element from Roscoe's Murder on the Way! So my (instinctive) comparison with Brand and Roscoe was right on the money.

This is the House is a first-class detective novel with a bodacious plot and written in the best tradition of the (alternative) Crime Queens, which comes especially recommended to mystery readers who're enamored with the work of Christianna Brand. You can bet this title is going to appear on my best-of list of 2018 and I'll try to return to Smith before this year draws to a close.
Geplaatst door TomCat on 8/09/2018