Last month, I reviewed three war-themed novels by Christopher Bush, The Case of the Murdered Major (1941), The Case of the Kidnapped Colonel (1941) and The Case of the Fighting Soldier (1942), which together form a home front trilogy that put Ludovic Travers back in uniform and solved three murder cases within the ranks of the military – praised by Curt Evans as "the most notable series of wartime detective fiction" published during the Second World War. This trilogy reminded me of two excellent, but often overlooked, novellas by Rex Stout with a similar war-theme and plots. So I decided to revisit them to see if they stood up to re-reading. They absolutely did. 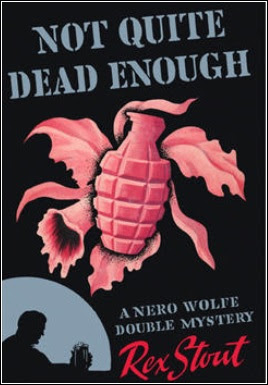 These two novellas represent, in my opinion, the best the series has to offer, because not only are they very well-written, fast-paced and tightly plotted detective stories, but the societal upheaval of the war provided Stout with an opportunity to deviate from series' formula – allowing him to cast his series-characters in a different light. I think this brought out the best in both Nero Wolfe and Archie Goodwin.

An abridged version of "Not Quite Dead Enough" was first published in the December, 1942, issue of The American Magazine and begins with a meeting between Major Archie Goodwin and "the top mackaroo of United States Army Intelligence." They need Nero Wolfe "to work on a certain matter of great importance," but he flatly refused. So they want Goodwin to go and see him, because he's the only one who knows how to handle him. However, when Goodwin returns to that famous brownstone on West 35th Street, after being away for two months, he gets "the worst shock" of his live.

The dusty desks and stacks of unopened mail in the office made him fear that either Wolfe or Fritz had died, but when he entered the kitchen he became convinced that they were both dead. Pots and pans were dusty and had not been used for weeks, if not months. Goodwin only found a dish or oranges and cartons of prunes in the cupboard, while the refrigerator only held lettuce, tomatoes and a dish of applesauce, but when he went up to the roof-top greenhouse he finally finds one of the residents of the brownstone, Theodore Horstmann – an orchid-nurse who looks after Wolfe's prize collection. Goodwin learns from Horstmann that Wolfe and Fritz placed themselves on a rigorous training schedule, because they intend to enlist and fight in Europe. Just like Wolfe did in the First World War ("I didn't kill enough [Germans] in 1918").

So getting Wolfe back into the game, this time with the U.S. army as a client, is easier said than done. Luckily, Goodwin bumped into a familiar face on his way back to the brownstone.

Lily Rowan has a friend, Anne Amory, who's desperately needs sound advice. She had found out something about somebody and wanted to know what to do about it, but she refused to give any details. Amory lives in an apartment building with a "goofy assortment of specimens" and a roof-top pigeon coop, which plays a part in the murder committed there shortly after Goodwin gets involved. And he uses this murder in an ingenious, if risky, way to ensnare Wolfe.

However, this novella is not just about Goodwin luring Wolfe back into the game to start working for the army intelligence, but the plot surrounding the murder is arguably one of Stout's best. Stout is not a mystery writer known for his ingeniously constructed, maze-like plots that brim with clues. Dialogue and characters were his forte, but the plot here is as clever and devious as the best short stories or novellas by such American mystery writers as Ellery Queen and Edward D. Hoch with a cast-iron alibi and a shrewd piece of misdirection – which I have only seen once before in an impossible crime story. Combine this cunning plot with the wartime backdrop and the unusual circumstances of the series-characters, you have one of the richest and most rewarding stories in the entire Wolfe corpus. I can't recommend this story enough.

The second and last novella in this collection, "Booby Trap," made its first appearance in the August, 1944, issue of The American Magazine and is a direct sequel of "Not Quite Dead Enough."

In the previous story, it was mentioned that the army wanted Wolfe to work on a matter of great importance and here it is revealed that the matter concerns the secrets entrusted to army of various industrial processes – a trust which is, according to an anonymous whistle-blower, "criminally abused." Some of these industrial secrets, without patent or copyright protection, are being betrayed to those "who intend to engage in post-war competition of industries involved." A dirty, underhanded business that could rob tens of millions of dollars from their rightful owners.

The anonymous letter writer also hinted that there might be more behind the accidental fall of Captain Albert Cross, of Military Intelligence, from the twelfth floor of the Boscombe Hotel in New York. A second death occurs shortly after the Wolfe meets with the military brass and this death is most definitely a murder: Colonel Ryder is blown to pieces in his office by "a new kind of grenade." Not only new in construction, but in its content. It is, however, never explained why these grenades were painted pink. I suppose this has something to do with them being test samples or something. Anyway...

Plot-wise, "Booby Trap" is not as intricately plotted or involved as "Not Quite Dead Enough," but the tense and brutal ending makes more than up for that.

I have seen Wolfe disposing of murderers before (e.g. Black Orchids, 1942) and would later do so again (e.g. In the Best Families, 1950), but never as brutal or remorseless as here. Wolfe psychically breaks the cowardly murderer and then forces this person to commit suicide with a pink grenade, which makes him comparable to H.C. Bailey's Reggie Fortune and Gladys Mitchell's Mrs. Bradley – who both played avenging angels in their respective series. The disposal of the murderer is justified here by the fact that the truth, if it came to light, would seriously harm the war effort. I guess all is fair in love and war.

Not Quite Dead Enough gathered two excellent novellas with one of them being a gemstone of the Wolfe corpus and the other ending the collection on a dark, but unforgettable, note.

I noted at the beginning of this post that these novellas are often overlooked, or even ignored, when it comes to lists of World War II mysteries. A list traditionally dominated by British mystery writers. I suppose this has to do with American detective novels from this period having the war play out in the distant background or have their plots diluted by spy material. However, this is not the case with these two closely-linked novellas and can stand with the best British wartime mysteries, which includes Carter Dickson's Nine-and Death Makes Ten (1940), Christianna Brand's Green for Danger (1944) and Christopher Bush's wartime trilogy. Unreservedly recommended!
Geplaatst door TomCat on 8/02/2018