I've seen tons of praise being heaped on Eric Keith's Nine Man's Murder (2011), which is considered to be a modern, puzzle-oriented homage to Agatha Christie's And Then There Were None (1939) with more than one seemingly impossible situation confronting the reader. So what's not to like, I thought, right? Well... 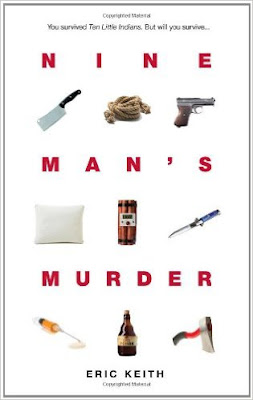 There are a string of past incidents described in the opening chapters and they provide a repository of motives, which come into effect when they discover the body of Damien Anderson in an upstairs closet. A knife-handle protrudes from his abdomen.

They further discover an obliterated bridge. A cut phone-line and a dead internet connection, which condemns them to spend a couple of days on the isolated mountaintop in the company of an ambitious killer – eager to rack up a respectable body count.

So far, so good, but the book doesn't break any new ground for this particular type of detective story. Granted, it's hard to do, but not impossible, because there are examples (e.g. Herbert Brean's The Clock Strikes Thirteen, 1954). Unfortunately, Nine Man's Murder settles on stock-in-trade depiction of the so-called "isolation-mysteries," but that not even my main objection to the book. Because that would've been forgivable.

The personalities of the characters resembles that of a group of Easter Island statues, because they're barely indistinguishable from one another and completely unmoved by what's been happening around them – which robbed the story of the mountain tension associated with these isolation-mysteries. A rising sense of terror and growing suspicion are the main ingredients for this type of story. Even if there's a puzzle at the heart of the story. Am I actually defending character-development?

Anyhow, my interest was briefly revived when a series of seemingly inexplicable murders began to occur, which include a shooting in an upstairs room when everyone else could be accounted for. Someone else is strangled to death inside a locked bedroom. A potential suspect is imprisoned in the library and the key is sealed away in a separate room, but the murderer was still able to get to the wrongly accused man.

I was hoping these locked rooms would be the books saving grace, but I couldn't have been farther from the truth. The explanation for the locked rooms harkened back to one of the oldest tricks in the book and it wasn't even done very well, which annoyed me even further and it was the point that I really began to hate the book – luckily, I had already arrived in the final pages of the book.

I really should end this review here, but I want to share an alternative explanation for the impossible murders to finish this review on a semi-positive note. There's also a reputation to maintain as the blogosphere's resident locked room enthusiast. So here we go.

Well, what if the doors at Moon's End had solid, wood-carved symbols embedded in them, such as a sun on the library door and stars on the bedroom doors, which appeared tightly sunken into the middle of the door, but could be taken out with a (special) nail, pen or stylus.

The murderer than could take aim through the newly opened hole in the door and shoot at his victims, which would provide the story with both a red herring and clue. There would be the acrid smell of gun smoke inside the locked room, suggesting the murderer was inside, but one of the trained detectives would notice the shots were very loud – perhaps too loud if they came from behind closed doors inside a locked room. It would also give the murderer more room and time to move around with less chance of being discovered.

I fully admit my solution isn’t entirely original either, but still better than what Nine Man's Murder offered its readers and it took me only a minute to come up with it. So, no, I didn't the like the book as a hole. Well, the clueing was decent, but that hardly justifies how the rest of the story was handled/played out.

Anyhow, I probably have something a lot better for my next review.
Geplaatst door TomCat on 9/11/2015