"Well, it's all clues, isn't it? On a whole, crosswords are far more exotic and exiting than police work."
- Morse (Inspector Morse: The Settling of the Sun, 1988)

During his lifetime, E.R. Punshon garnered favorable reviews as a fully-rounded mystery writer from the likes of Dorothy L. Sayers and the pseudonymous "Torquemada," but decades of shameful neglect preceded his slow rediscovery during the 2000s and now his work is finally brought back into circulation – courtesy of Dean Street Press.

I first took notice of Punshon when I read Nick Fuller's now defunct website, which described his "ability to construct labyrinthine plots" as being "rivaled only by John Dickson Carr." 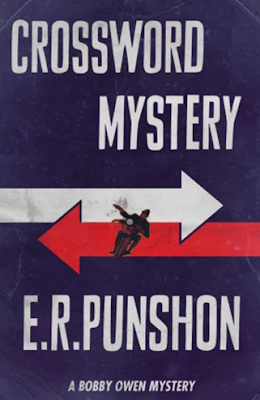 Well, that comparison made me perk up like a prisoner receiving a jolt from the electric chair and I could see why the comparison was made when I finally read Information Received (1933). It was an excellent mystery novel reminiscent of Carr's darker, standalone work such as Poison in Jest (1932) and The Emperor's Snuff-Box (1942), but it was the only one I could get my hands on at the time. So I'm glad Punshon's is made accessible again to today's horde of mystery readers.

Crossword Mystery (1934) is one of the titles reissued this past summer and has an introduction written by our crime-fiction historian Curt Evans, which described it as "a novel with an intricate, fairly-clued puzzle, incisive social observation" capped with "an astonishing climax that surely is unique within the literature of crime fiction" – alongside some glowing quotes from Dorothy Sayers and Charles Williams. The latter saw in the book hope for the detective story's future and placed it alongside Ronald A. Knox's Still Dead (1934) and Sayers' The Nine Tailors (1934). You could argue that Evans' preface is more of an appetizer than an introduction.

The book opens with Punshon's series-character, Detective-Constable Bobby Owen, being send to Suffby Cove, which is a quiet, seaside village that had remained largely untouched by the 20th century. Owen's task is to pose as a houseguest in the home of a retired stockbroker, Mr. George Winterton, who's convinced that his brother's drowning was murder and requested protection – because he fears he may be next.

There are, of course, multiple suspects milling around the place, which includes three of Winterton's nephews: a horse-racing fanatic, named Colin Ross, a painter and black sheep of the family by the name of James Matthews and Miles Winterton – who was reprimanded by his uncle for flirting with his secretary.

Miss Raby is Winterton's secretary/typist and types out the pages for his book, Justification of the Gold Standard, while in her spare time she constructs crossword puzzles for the Daily Announcer. The list of suspects are rounded out by the servants, Mr. and Mrs. Cooper, and a businessman from London who wanted to turn Snuffby Cove into a seaside resort, which George's brother managed to prevent before his drowning.

All of the ingredients for a proper, thoroughly English country house/village mystery are present, but Owen wonders, early on the case, who "would want to murder two quiet, inoffensive, retired business men" spending their old-age at the coast – writing books, solving crossword puzzles and swimming in the cove. The answer is that there's obviously someone when an unmistakable case of murder occurs and it's (briefly) presented as a locked room mystery!

Owen has instructed Winterton to lock his bedroom door and fasten his windows, which are still in place the following morning and even the key is sticking in the lock from the inside.

However, the body of the locked room's occupant has been mysteriously transported to the lawn outside, but the mystification about this aspect is cleared up within one chapter and the explanation is pulled from an old bag of tricks – very similar to the impossible elements from Agatha Christie's Hercule Poirot's Christmas (1938) and Nicholas Blake's The Case of the Abominable Snowman (1941). So I have to tag this as a locked room mystery, but with reservations.

After the second murder, the story slowly moves away from the traditional country house-and village mystery to a treasure hunt-type of thriller. A clumsily made crossword puzzle with a keyword, "Gold," made by Winterton's is key to this hunt and beautifully reproduced in this edition. Anywhow, I have seen this portion of the novel being compared to (there she's again) Sayers' "The Fascinating Problem of Uncle Meleager's Will," from Lord Peter Views the Body (1928), but I thought the plot was more indebted to Sherlock Holmes than Lord Peter.

There are light signals seen in the garden that might be connected to a recently released criminal (The Hound of the Baskervilles, 1902), but there's also a dog that doesn't bark when he's supposed to ("Silver Blaze") and the treasure hunt reminded me somewhat of one of my favorite Holmes story, "The Musgrave Ritual." However, the most intriguing aspect of Crossword Mystery is that it was published in the same year as Darwin L. Teilhet's The Talking Sparrow Murders (1934), which are among the earliest examples in fiction that took a critical look at the then new Nazi regime in Germany.

This aspect in Crossword Mystery is poured into a late chapter, but it's there and with its connection to the solution one could argue that it's a prelude of the deluge of WWII mystery/spy-thrillers that would flood the market less than a decade later – making Punshon somewhat of a visionary. I would have preferred if Punshon's would've stayed within the territory of the country house/village mystery, because that was the best part of this book, but, historically, the final stretch of the story isn't without merit either.

So I'll end this messy, over-referenced review on that note, because I can't seem to write anything short and to the point these days.
Geplaatst door TomCat on 9/06/2015