The Devil in the Summer-House

"Oh dear, I never realized what a terrible lot of explaining one has to do in a murder."
- Clarissa Hailsham-Brown (Agatha Christie's Spider's Web, 1954)

The collaboration between Dean Street Press, an independent publisher "devoted to revitalizing good books," and Curt Evans, genre historian and author of Masters of the "Hundrum" Mystery (2012), is arguably the best thing that happened to the forgotten detective story since the Rue Morgue Press and Crippen & Landru opened for business.

It's a collaborative effort that's slowly bringing E.R. Punshon's work back into circulation and republished, after close to a century of neglect, two mystery novels by Ianthe Jerrold – of which one, Dead Man's Quarry (1930), is a textbook example of a forgotten classic. And that's not just me saying that. 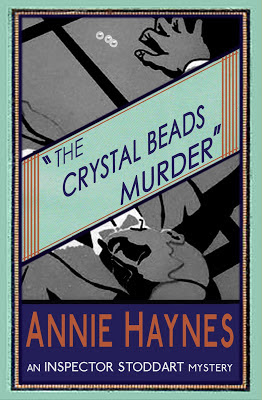 Annie Haynes is a mystery writer Evans first wrote about in 2013 and at the time he "knew of only two living persons," besides himself, "who had read any of her books." Thankfully, Dean Street Press will be adding her work to their expanding catalogue and Rupert Heath was kind enough to supply me with a review copy of The Crystal Beads Murder (1930), which was probably completed by "Anthony Gilbert" after Haynes untimely passing.

There are other persons of interest who could've completed the manuscript, but Evans made a compelling case as to why it might have been Gilbert.

I'll refrain from retracing parts of the introduction Evans wrote, but, if you want an idea of what kind of person Haynes was, there's a short, interesting foreword by one of her close friends, Ada Heather-Biggs – who mentioned Haynes once cycled "miles to visit the scene of the Luard Murder" and pushed "her way into the cellar of 39 Hilldrop Crescent, where the remains of Belle Elmore were discovered."

Unfortunately, "the last fifteen years of her life" Haynes "was in constant pain and writing itself was a considerable effort" with "her only journeys being from her bedroom to her study," but "this struggle with cruel circumstances" was "lightened by the warmth of friendship existing between Miss Haynes and her fellow authors."

Well, that dark cloud has long since passed and I'll be doing my part now in lifting Haynes from the memory hole of history by taking a look at her last novel.

The Crystal Beads Murder is the last recorded case in the Inspector Stoddard series and has a plot clustering around the murder of the odious William Saunderson, a professional moneylender and part-time blackmailer, who's shot to death in the summer-house of Lord and Lady Medchester – during an evening of drawing-and billiard room activities characteristic of the early 20th century.

A full house of potential suspects moved about the premise and garden, which isn't exactly helpful to the police, even though "an alibi is the easiest thing in the world to fake" and "the least satisfactory of defenses." 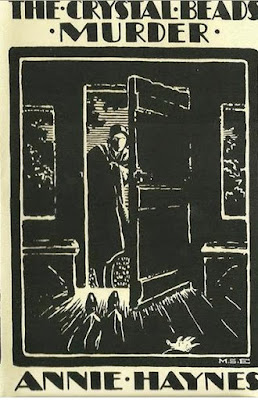 There is, however, one tangible clue, "three crystal beads finked together by a thin, gold chain," which was found upon a second examination of the body, but a superintendent swears it wasn't there during the initial inspection of the victim. So did the murderer, or someone else, returned to the scene of the crime and left a "clue," of sorts?

In this respect, the first half of the book often reminded me of the typical, 1920s mystery novel, but without excessive littering of monogrammed handkerchief and train tickets – which is a huge plus for a mystery writer who wrote and published practically her entire body of work during that decade. It's only to be expected that, stylistically, Haynes' work reflected the genre, as it was in the 1920s, which made the change of author especially noticeable in the second-half.

A policeman is mortally wounded by a bullet in the second leg of the story and his dying process, and aftermath, isn't the emotionless affair that the murder of Saunderson was.

Saunderson had a wife turning up out of nowhere. A wife who admitted her husband "had his faults" and didn't "see why he should be done in and nobody punished," but her main interest is the possible inheritance that could come her way in lieu of an official will. The portrayal of the emotionally devastated widow of the poor policeman is the complete opposite.

There's a genuine sense of lost and even their home reflects this sudden, painful lost: the home looked "so familiar, and yet with life turned gray and the pivot of her very existence removed, it all looked flat and unresponsive," followed by, "the clock on the mantelpiece that she and Bill had bought when he got promoted to sergeant still ticked on with the same monotonous perseverance as ever, but it seemed somehow to be telling quite a different story." These brief snippets of grief really made me sympathize with the hangman.

If you link that with another plot-thread, involving a domestic intruder attempting to force a marriage, and you've got another indication that the mystery author might have been Anthony Gilbert – because it reflects the kind of domestic strains she specialized in when her own career took off (e.g. Something Nasty in the Woodshed, 1942).

I've got one, minor complaint, before I cut this overlong, rambling review short, which is the clue Stoddard uses to solve the case. It's a piece of evidence that’s sloppily overlooked by the police during their first investigation of the crime-scene and thrown in the inspectors lap by a passing tramp (Curt?!) and the policeman's widow, which prevents Stoddard from leaving an ever-lasting impression on the readers – and that's a shame since this was his last recorded case.

But, aside from that, Connoisseurs of Murder will find another interesting and exciting rediscovery from the Golden Age of Mysteries in Haynes and The Crystal Beads Murder. The book is slated for release in early October of this year.
Geplaatst door TomCat on 9/18/2015