"We have every hope of clearing the matter up, but we find a little difficulty in getting anything to work upon. We have, of course, wired to the Belfast post-office, but a large number of parcels were handed in upon that day, and they have no means of identifying this particular one, or of remembering the sender."
- Inspector G. Lestrade (Sir Arthur Conan Doyle's "The Adventure of the Cardboard Box," from His Last Bow, 1892)

Since early 2011, I have reviewed a wide variety of detective-and crime fiction on this blog, from Pat McGerr and John Dickson Carr to Louise Penny and Keigo Higashino, but I consider my reading of the genre to be still rather shallow – especially when compared to a scholar such as Curt Evans or a professional fan boy like Bill Pronzini.

You might think that's an exaggeration on my part, but take a look at the authors whose work I have barely touched or ignored altogether. 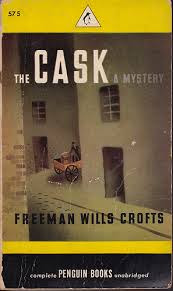 My bookshelves are entirely bare of any traces of the works penned by Milward Kennedy and Margaret Millar. There's a tiny, largely unread clustering of mystery novels by J.J. Connington, Henry Wade and G.D.H. & M. Cole collecting dust on those very same shelves and the only thing I had read by Freeman Wills Crofts was a short story, entitled "The Mystery of the Sleeping-Car Express," in The Oxford Book of English Detective Stories (1990) – which is embarrassing for an enthusiastic advocate of Golden Age mysteries. Something had to change!

Since you have to begin somewhere, I decided to pick up Crofts' famous debut novel, The Cask (1920), which was written in 1919 "during a slow recovery from a long illness" with a "pencil and exercise book." A revised, more polished version of the draft was published a year later, which sold over a 100,000 copies and was translated in nine languages by the time my edition from 1946 rolled off the presses. The book was a commercial success and cemented Crofts reputation as a (Golden Age) mystery writer.

The Cask is an exuberant, old-fashioned story that takes place between the month's of March and May of 1912, but, stylistically, the book reminded me more of the stories from J.E. Preston-Muddock's Dick Donovan: The Glasgow Detective (collected in 2005) than (lets say) Conan Doyle's post-1800s Sherlock Holmes stories or A.E.W. Mason (e.g. At the Villa Rose, 1910) – even though the story is plotted like a Golden Age mystery.

The Insular and Continental Steam Navigation Company has a cargo ship by the name of Bullfinch arriving from Rouen, France, but one of the casks it was transporting appears to have suffered damage. Sawdust poured from a crack alongside several golden sovereigns. The content of the damaged casket is far less benevolent than the stuff it's spilling: a body of a woman, instead of a statue, and the managing-director of the company personally fetches Inspector Burnley of Scotland to investigate the matter. 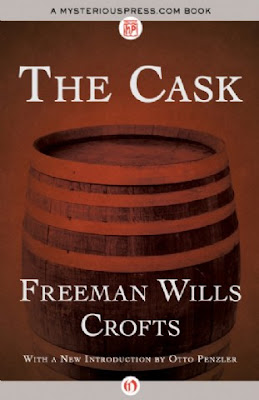 However, when they arrive at the docks, someone, somehow, carried off with the burdened cask and the first portion of this three-part structured novel is concerned with finding it again. The makeshift casket disappears a second time over the course of this investigation and the golden sovereigns are possible linked to a 50,000-franc lottery prize, but, overall, this part can be considered as a very long prologue.

A small point of interest from this portion of the book that I have point out is that there's police-constable, named John Walker, who "had read Conan Doyle and Austin Freeman, and other masters of detective fiction, and their tales had stimulated his imagination," and whose heroes he tried emulate – as he "climbed to the giddy eminence of an Inspector of the Yard." I instantly liked this character and namedropping mystery writers would become something of a trope in the decades ahead.

The second part of the book takes Inspector Burnley to France, where he's reunited with M. Lefarge of the Sûreté, having previously collaborated in the Marcelle murder case, "which attracted so much attention in both countries."

The work both investigators have to do in the second part is closer to classic detective, as we know it, than the first part as they establish the victim's identity and retrace the steps of a couple of suspects, which covers England, France and Belgium – and even Stockholm, Sweden is mentioned. A rigorous testing of alibis is something Crofts build a reputation around and even become something British mysteries were mocked for, but there was nothing tedious about it here. And their work eventually pays off, when they procure the evidence needed to make an arrest and bring the case to court.

In third and final part of the story, a solicitor engages the services of a private detective, Georges La Touche, to go over the evidence and prove his client's innocence, in which he succeeds, but the dénouement shows Crofts was still somewhat inexperienced.

The Cask is, at it’s core, a fairly simple case and the murderer successfully muddled the waters, which is probably when Crofts realized he had plotted himself in a corner and this resulted in a rushed, somewhat forced ending – complete with a confession and an off-page suicide. I think the book would've had genuine status as a classic today if the murderer had laughed in Le Touche's face and wished him luck with proving his case in court, especially as an ending to an old-fashioned, almost charming story, but would such darkness have gone over well at the dawn of the Roaring Twenties?

In any case, The Cask was a successful debut that promised much from its author and the genre it belonged to, which was a promise that was most definitely kept by everyone involved.

On a final note, in the weeks ahead I'll tackle one or two mystery novels by E.R. Punshon. I have (yet) another foreign collection of stories from the East on the pile and I'll finally be tackling a detective novel that gave me serious case of hobby deformation. Stay tuned!
Geplaatst door TomCat on 9/01/2015