The Case of the Kidnapped Colonel (1942) by Christopher Bush

Christopher Bush's The Case of the Kidnapped Colonel (1942) is the twenty-fourth novel in the lengthy Ludovic Travers series and the second of three mysteries, book ended by The Case of the Murdered Major (1941) and The Case of the Fighting Soldier (1942), that together form a trilogy of war-themed detective stories – branded by Curt Evans as "the most notable series of wartime detective fiction." I think the first of these three wartime mysteries definitely lived up to praise, but what about its second one? Let's find out, shall we?

Previously, Captain Travers was assigned to an internment camp as its Adjutant Quartermaster and became, yet again, embroiled in a murder case. However, this time he was upstaged by his policeman friend, Superintendent George "The General" Wharton of Scotland Yard.

The Case of the Kidnapped Colonel is the first book in the series to be narrated by Travers, promoted to the rank of Major, who's transferred to Camp 55 near the city of Dalebrink in Derbyshire. Major Travers is placed in charge of the camp and the place is tasked with guarding two factories, tunnels, a bridge and "a certain hush-hush establishment."

Wharton happens to be in Derbyshire on "special hush-hush work" and Travers begins to suspect Wharton is the reason why he was transferred to Camp 55, which involves vitally important research work for the defense department and a leftist group of pacifists, New Era Group (N.E.G.) – locally known as "Neggers." A wily lot of "cranks and intellectuals" planning a New Order and there are people who want to see "the whole collection of Neggers" under lock and key.

Dalebrink Hall is the home of Colonel Brende, a gunnery expert, who uses the place as a facility to research a method to detect night-flying aircraft. Colonel Brende is assisted in his work by three experts: Heinrich Wissler, formerly Professor of Physics at the University of Prague, who resembles Albert Einstein as a young man. Francis Newton, Professor of Physics, and a research student, George Riddle. The well-born and alluring Hon. Penelope Craye, a distant cousin of Colonel and Mrs. Brende, fulfills the duties of private secretary, but before the war, there were whispers that "she was one of the set of Hitler's apologists." So there you have some of the important pieces of the plot, but, before they can be moved into action, we get to see some of the effects of the war on the local community.

The town is bombed during a nighttime air-raid and the bombing demolishes a number of houses, killed twelve people and left some forty injured.

Rev. Lancelot Benison, an Anglican minister, is the moving spirit behind the Neggers and published a fiery letter in the Clarion holding the authorities responsible for those twelve souls as "surely as if they had cut their throats" – coldly countered by Travers that you can't have an omelet without breaking an egg. He also has his duties as Commandant of Camp 55 and one of his jobs is having to deal with Howard Craye, "a lounge lizard in uniform," who's Mrs. Brende's nephew. And he can't even be bothered to salute properly. Than there's a mysterious background character, Major Passenden, who turned up in Lisbon and had hinted at "incredible adventures in France," but the fat hits the pan when Colonel Brende is inexplicably taken from his home.

Once again, Bush created here a quasi-impossible situation. There was a cordon of sentries around the house and "they were all keyed up to the highest pitch of alertness," because the Home Guard had setup an exercise with the aim of entering certain spots the camp was guarding as mock German para-troopers. This placed the guards on high-alert. So how did the kidnappers passed through this cordon? Not once, but twice! I think the solution strips this locked house mystery of its status as an impossible crime, you'll know why when you read it, but this is why I have become so fond of this series. 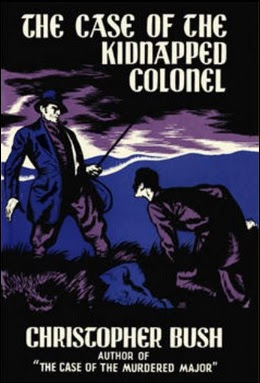 Up to this point, the story appeared to be dominated by the intrigues of the spy genre, but the traditional detective elements slowly overtake the plot when Penelope Craye's champagne is doctored with "a strong solution of veronal" – which will furnish the book with an ending befitting a mystery novel of this vintage. I needed some time to penetrate through the fog of far and piece together (most) of the puzzle, but eventually, with only a quarter left to go, I had a good, nearly complete picture of what had been happening.

There is, however, one thing I need to mention about the identity of the murderer (no spoilers). Bush was not the first one to use this specific solution and only came across it once before, but the plot was handled very poorly in that novel. Resulting in one of the most transparent mysteries ever written. I think it's a testament to Bush's talent as a plotter that he only could make this trick work, but even fool a reader who has seen it before! Honestly, the comparison didn't occur to me until I had figured parts of the solution out. Well played, Mr. Bush. Well played.

You know what else I really like about this series? You'll never know who's going to provide the solution. More often than not, the unraveling of the plot is collaborative effort between Travers and Wharton. As each of them find the various pieces of the puzzle. Sometimes, one manages to completely upstage the other. This is the second time in row Travers is reduced to the rank of supporting character by Wharton. This is an interesting and original way to humanize your series-detective without having to resort to the fallible detective trope. Travers and Wharton are simply ordinary human beings who pool to talent and knowledge to solve a problem.

By the way, if Wharton goes 3-0 in The Case of the Fighting Soldier, I'm going to refer to this wartime trilogy as the Superintendent George Wharton series. He deserves it.

So, yes, this was definitely one of the better Bush's, regardless of period, and comes highly recommended to fans of the series and mystery readers who love detective stories with WWII as a backdrop. Or if you simply enjoy a good detective yarn.
Geplaatst door TomCat on 7/17/2018